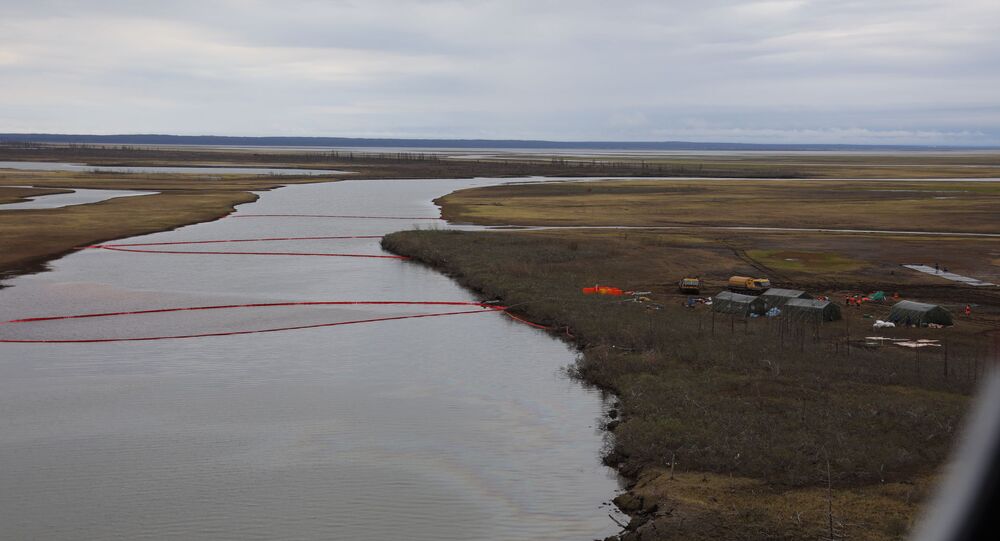 MOSCOW (Sputnik) - A new oil blend spill occurred during the clean-up of the recent fuel leak in the north of Russia, near the city of Norilsk, Russia's Rosprirodnadzor environmental watchdog said on Friday.

According to the statement, the water-fuel mixture got into the Ambarnya River as a result of a "burst and discharge through the sleeve," through which it was pumped to a temporary storage site.

The volume of the leakage is about one cubic meter.

A representative of the emergency services said that over the past day, 154 cubic meters of the fuel-water mixture was pumped through temporary pipelines from the mouth of the Ambarnaya River to the temporary storage site.

On 29 May, some 21,000 tonnes of diesel leaked out of a fuel tank at the Norilsk-Taimyr Energy Company’s Thermal Power Plant No. 3 and seeped into a nearby river. According to Nornickel, which owns the power plant where the accident took place, the spill was caused by melting permafrost, which set the supports of the fuel tank in motion.

The emergency services have announced having localized the spill. Russia's Rosprirodnadzor environmental watchdog has estimated the incurred damage at approximately $2 billion. The company said that it was contesting the amount of damage to the environment caused by the fuel spill.