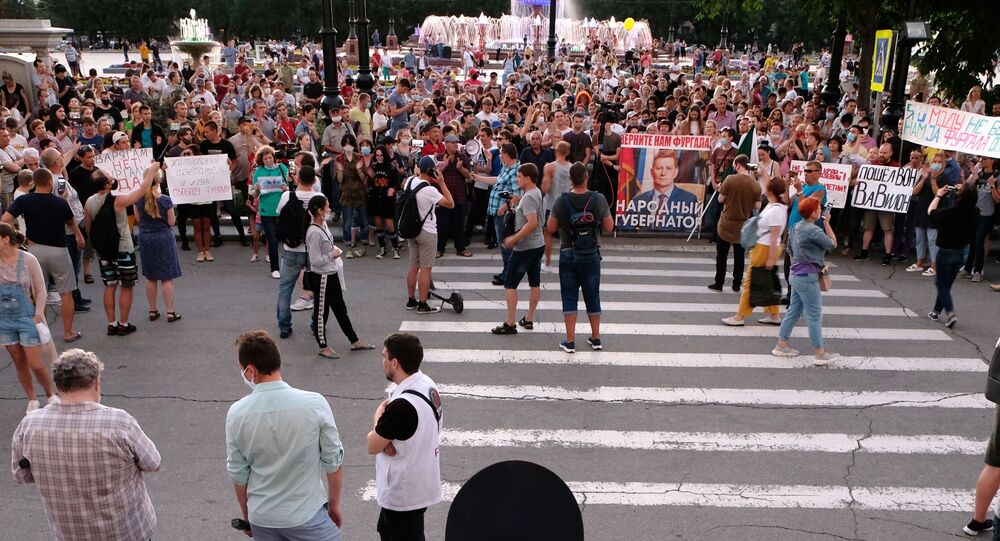 Some 6,500 People Join Rally in Support of Arrested Ex-Governor in Khabarovsk, Authorities Say

KHABAROVSK, Russia (Sputnik) – Some 6,500 people are taking part in an unauthorised rally in Russia's Far Eastern city of Khabarovsk on Saturday, the 15th day of protests in support of arrested former Governor Sergey Furgal, the city administration said.

"The capital of the [Khabarovsk] territory is witnessing a new rally in support of arrested [former] Governor Sergey Furgal. About 3,000 people have gathered today on the square in front of the regional government. During the rally, some 3,000 more people joined the crowd. A total of 6,500 people have joined the rally," the administration said in a statement.

According to the statement, the protesters are calling for the release of Furgal or an open trial for the arrested ex-governor.

A Sputnik correspondent reported that the traffic plan has been changed in Khabarovsk because of the massive demonstration.

© Sputnik / Alexei Nikolsky
Putin Receives Reports on Most Important Parts of Moscow Protests Case - Kremlin
Then-Governor of the Khabarovsk Territory Furgal, from the Liberal Democratic Party of Russia (LDPR), was detained on July 9 as part of the probe into an organised criminal group involved in killings of businesspeople in the Khabarovsk Territory and the Amur Region in 2004-2005.

The detention of Furgal sparked protests across the Khabarovsk Territory.

On Monday, Russian President Vladimir Putin appointed Mikhail Degtyarev (also from LDPR) an interim governor of the Khabarovsk Territory, but the protests are still underway.