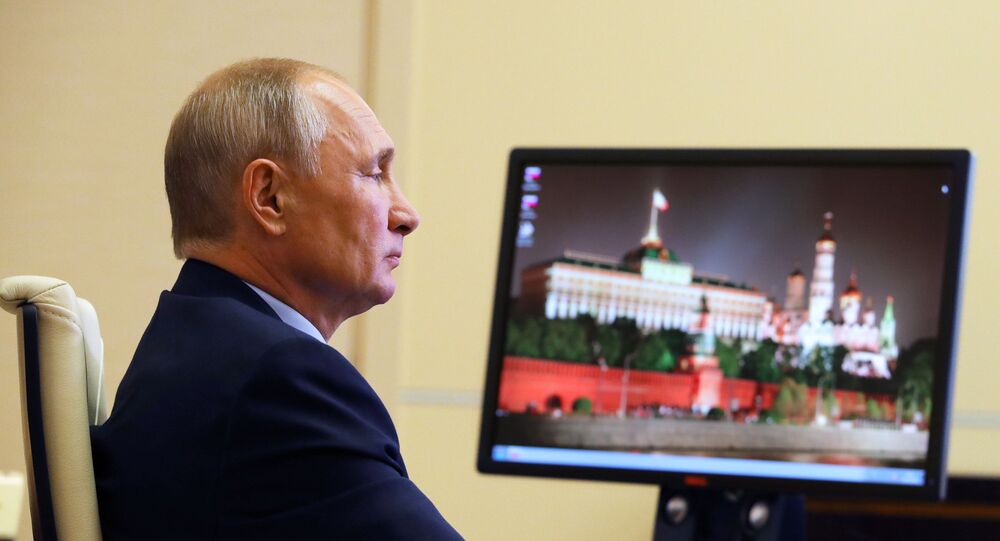 MOSCOW (Sputnik) - Russian President Vladimir Putin on Sunday has expressed confidence that the adoption of amendments to the country’s constitution following a nationwide vote is a step in the right direction for strengthening the country and fostering development for decades to come.

"I am absolutely convinced that we are doing the right thing, that we are adopting amendments to the current constitution. These amendments will strengthen our nationhood and will create the necessary conditions for the progressive development of our country in the coming decades", Putin said during an appearance on the Rossiya 1 broadcaster.

The Russian president also referred to the amendments that concern the inviolability of the country’s borders, adding that these changes were proposed by members of the working group on the constitutional amendments and citizens themselves.

Commenting on previous constitutions of Russia at the time when it was part of the Soviet Union, Putin said that the constitutional provisions stipulating the Communist Party's monopoly on union-wide power and the right of member states to secede anytime they want to be a time bomb.

"With regard to the secession from the Soviet Union. The constitution — the 1977 constitution and the previous ones — enshrined the Communist Party's monopoly on power and the party itself was the core of the entire state system. There were no provisions on the right to quit the party for the representatives of different national entities. It [the Communist Party] held everything", Putin said.

According to the Russian president, this amounted to the Bolsheviks knotting their own future and interests with the interests of the entire union.

"And when the Communist Party began falling apart, on its own and under no external hits, the entire country followed to collapse. This is absolutely unacceptable. This was a delay-action mine, planted back in 1922 amid the creation of the Soviet Union and then in the constitutions of 1924, 1936 and 1977. We have to avoid such things", Putin said.

The amendments to Russia’s 1993 constitution came into force on Saturday after gaining the support of 77.92 percent of people who cast their ballots in a nationwide vote. Turnout was just below 68 percent.

© Sputnik / Vladimir Pesnya
Kremlin Sees Results of Russia's Constitutional Amendments Vote as Triumph
The constitutional amendments protect the institution of marriage as the union of a man and a woman, set children as a priority of Russia's domestic policy and include obligations to support and protect culture as the unique heritage of Russia's multi-ethnic nation. Other amendments confirm that Russia safeguards historical truth and honours the efforts of the defenders of the motherland.

The amendments envision a limit of two six-year terms for the President of the Russian Federation. The provision applies to the president at the time the legal changes enter into force; not taking into account the number of terms previously served in this position, thus paving the way for President Putin to run again after his current term ends in 2024.

The changes also aim to protect Russia’s sovereignty and territorial integrity, prohibiting any attempts or calls to alienate part of its territory.