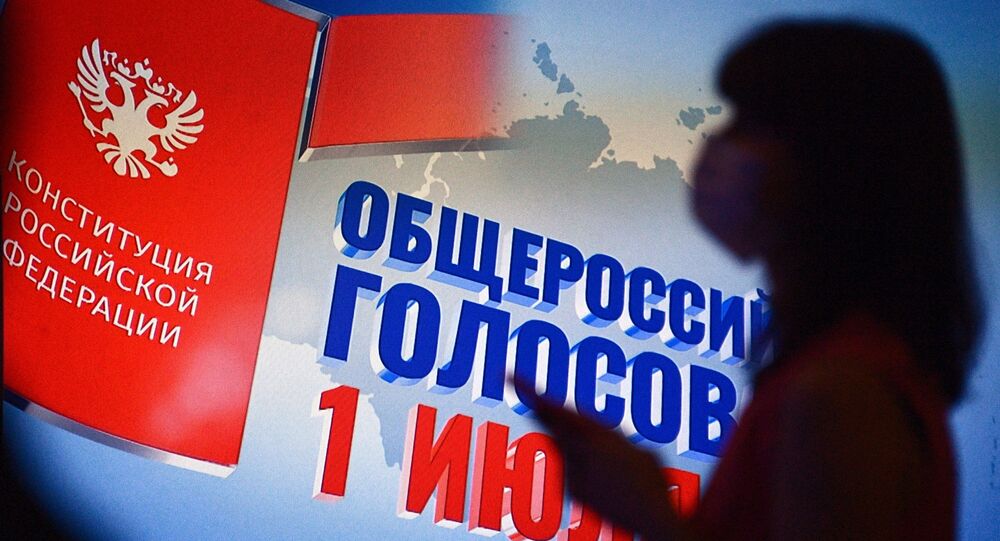 Constitution 2020 Vote in Russia: Amendments From Governance to Social Welfare

MOSCOW (Sputnik) - Russia is voting on a comprehensive package of 206 amendments that are going to address such issue areas as governance and its agents, social welfare, marriage, pensions and the Russian language’s status, among other things.

In January, Russian President Vladimir Putin proposed in his annual address to the parliament, officially the Federal Assembly, to introduce amendments to the constitution. Despite there being no legal requirements for a referendum to effect constitutional reforms in Russia, Putin stressed — in the speech and then again on multiple occasions — that the amendments would only enter into force if people vote so.

The vote was initially scheduled for mid-April, but ended up postponed to run from June 25 to July 1 due to the coronavirus-related lockdown. The pandemic was instrumental in prompting the Russian government to extend the vote for an entire week and allow citizens to vote not only at polling station but also at home and on the internet, albeit the latter option piloted only in Moscow and the Nizhny Novgorod Region. Results are expected to be known in five days after the voting ends on Wednesday.

The current Russian constitution was adopted in December 1993. It has nine chapters, of which the first, second and ninth are non-amendable. Chapters 3-8 have so far undergone 15 amendments, with the most well-known being the increase of the presidential term from four to six years in 2008.

This part is going to remain intact. Those to be amended categorize into several rubrics.

Article 81 of Chapter 4 read "One and the same person may not be elected President of the Russian Federation for more than two terms running." In the new reading, the word "running" is going to be removed, meaning that any president will be limited to two terms total, consecutive or not.

The amendment also specifies its non-applicability to the incumbent president’s previous terms and, therefore, allows him to rerun for another two terms, should he choose to.

The presidency will now be limited to people who have resided in Russia for at least 25 years, as opposed to 10 years previously, and who have no assets in banks overseas.

The president will uphold the power to appoint and dismiss the prime minister upon consent of the parliament’s lower house, officially the State Duma, whereas the dismissal of prime minister will now not amount to a default dismissal of the entire cabinet, as was previously the case.

There are also amendments to the procedure of cabinet appointments. Previously, ministers were appointed by the president on the proposal of prime minister. Under the amended provisions, the prime minister shall propose cabinet candidacies to the lower house: if approved, the president will formally appoint them; however, if not approved thrice consecutively, the president will seize the right to appoint the cabinet unilaterally, dismiss the Duma and call a snap general vote. This provision shall not apply to select portfolios, including ministers of defense, foreign affairs, justice, interior and emergencies — they will be appointed by the president upon consultations with the upper house, the Federation Council.

Also upon consultations with the upper house, the president will get the power to appoint and dismiss the prosecutor general, their deputies and prosecutors at the entire regional level, as well as to initiate the dismissal of the Constitutional Court judges.

The president will get the right to appoint 30 nominees to sit in the 170-strong upper house, seven of whom will serve as senators for a life term, whereas previously the presidential appointments in the senate accounted for 17, or 10 percent of all seats.

The new constitution will give the president lifetime immunity against prosecution, which can only be withdrawn by the upper house. Ex-presidents will also be able to serve as senators for a life term with affix immunity.

An interesting amendment has been proposed to diversify locations of the federal government institutions and move them to places other than Moscow, where they all have been anchored until now.

A new government body named Council of State will be established to coordinate the three branches of power and determine the country’s domestic and foreign policies — these were previously part of the president’s mandate. This body’s mandate gets no further elaboration in the constitution and is expected to be clarified in a separate federal law.

For the first time ever, the Russian constitution will mention the word God. A brand new article is drafted to say that "the Russian Federation, united by a thousand-year history, preserving the memory of ancestors who passed to us ideals and faith in God, as well as the continuity in the development of the Russian state, recognizes the historically established state unity."

In the same article, Russia pledges to preserve and safeguard "the historic truth." This reflects Moscow’s long-standing criticism of countries that it believes pursue a revision of significant historical events, especially the defeat of Nazism in Europe during the Second World War.

Russia is further codified as the Soviet Union’s successor state, including with regard to membership in international organizations and the union’s assets abroad. The continuity of the Soviet Union and the role of Russia and other former member states was previously codified in a number of bilateral and multilateral agreements, including the 1991 Agreement on Succession of External Debt and Assets of the Soviet Union.

The article that earlier designated Russian as Russia’s state language will now get an extra part describing Russian as the "language of the state-forming people."

At the same time, non-Russian peoples enjoy the right to uphold their languages as official on a par with Russian in their respective federal entities. The constitution codifies safety guarantees to Russia’s ethnic, cultural and linguistic diversity by the federal government.

Another amendment introduces the new term of "federal territories," in addition to previously existing territories of Russian federal entities, domestic waters, territorial sea and airspace, all of which comprise the Russian Federation’s territory. The new constitution outlaws any attempts of territorial expropriation and incitement thereof.

One of the most longed-for amendments among the Russian population has been the one to match minimum wage with minimum standard cost of living, which in Russia is calculated by the sum of baseline monthly utility bills, grocery and essential non-food expenses.

With regard to pensions, the amendments provide for an annual indexation to keep payments compatible with inflation rates. Indexation will also be applied to social benefit payments.

Several governance issue areas are being moved under the joint jurisdiction of the federal and local governments, among them agriculture, youth policies and family and child policies, whereas the federal government gets to determine common public health care standards.

Despite a common misperception, the amendment on family policy does not infringe upon same-sex families, such as those where a child is raised by a mother and a grandmother or by a father and a grandfather, but rather coins "marriage" as "a union of a man and a woman."

Children are covered under another brand new article that designates them as "the most important priority of Russia’s state policy," with the constitution mandating the government to ensure a comprehensive spiritual, moral, intellectual and physical development of children and cultivation of patriotism and civic consciousness in them.