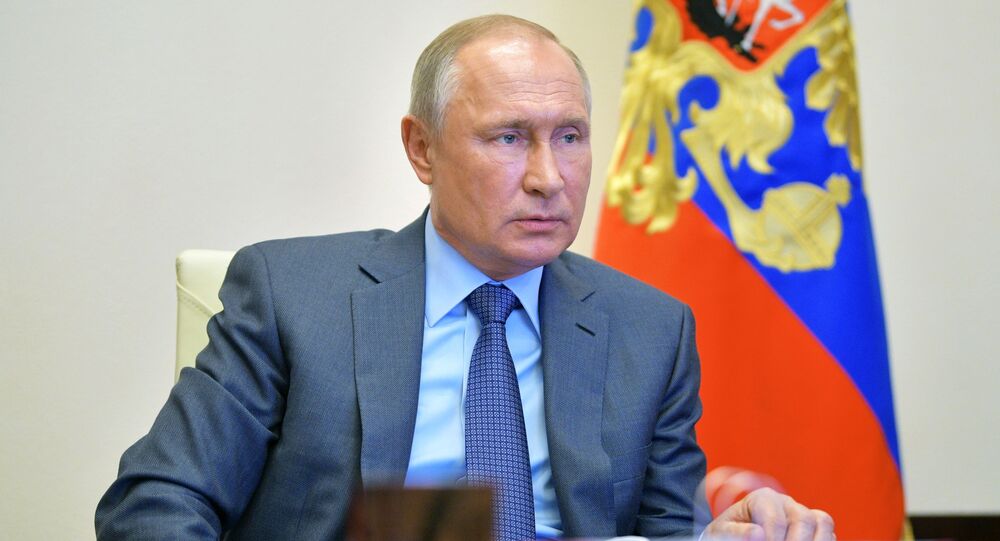 "The epidemic dealt a severe blow to the global economy. Trade, the work of enterprises, and cooperation ties seemed to have stumbled upon a wall of quarantines and restrictions," Putin said in his address to the nation.

"Essentially, a global recession has begun, a recession in the global economy," he added.

The Russian economy has not come back in full force yet, the unemployment has grown, Putin said.

He recalled the support package devised for the Russian economy and people amid the pandemic.

"The support package for citizens and the economy that we launched this spring has become unprecedented in the amount of allocated funds and the outreach of this assistance. We managed to do this, thanks to accumulated reserves and stable macroeconomic indicators, as well as a responsible budget and monetary policy that we have pursued over all these years," Putin said in a televised address.

"At the same time, the economy has not come back to work in full force and the unemployment has grown. There are still difficulties," Putin said.

The president has asked the government and the Central Bank to take steps to ensure that the job market is back to pre-crisis level or even better.

The Russian ruble has recently been buoyed by the strength of Russian economic fundamentals rather than by artificial manipulations, Putin said.

"Predictability, stability of the national currency, stability of the ruble was provided not artificially, not by some command, but due to the strength of the Russian economy's fundamentals," the president said in a televised address.

Extra payments to medical personnel dealing with COVID-19 in Russia should continue for two more months as the fight against the pandemic continues, Putin said.

Initially, Putin announced the allocation of 10 billion rubles ($132 million) for extra payments to medical personnel amid the coronavirus outbreak in the country in early April. The government has subsequently allocated additional funds to support doctors and other medical staff amid the pandemic.

"The fight against the epidemic continues, as well as hard work in hospitals, clinics, ambulance stations, therefore, as I said, it was decided to extend all these payments [medical personnel dealing with COVID-19] for July and August," Putin said in a televised address.

Russian President Vladimir Putin on Tuesday suggested lowering corporate tax for IT companies from 20 percent to 3 percent for an unlimited period of time.

"The right thing to do will be to significantly decrease the corporate tax rate for IT companies, for unlimited time, from 20 percent to 3 percent, which is not simply comparable, but even better than in such attractive jurisdictions as India and Ireland. De facto, it will be one of the lowest tax rate in the world," the president said.

"Starting January 1, [I propose] changing the income tax rate from 13 percent to 15 percent for those who earn more than 5 million rubles a year. I will say at once that the raised rate will apply not to the entire income but to the portion of it which exceeds 5 million," Putin said in a televised address.