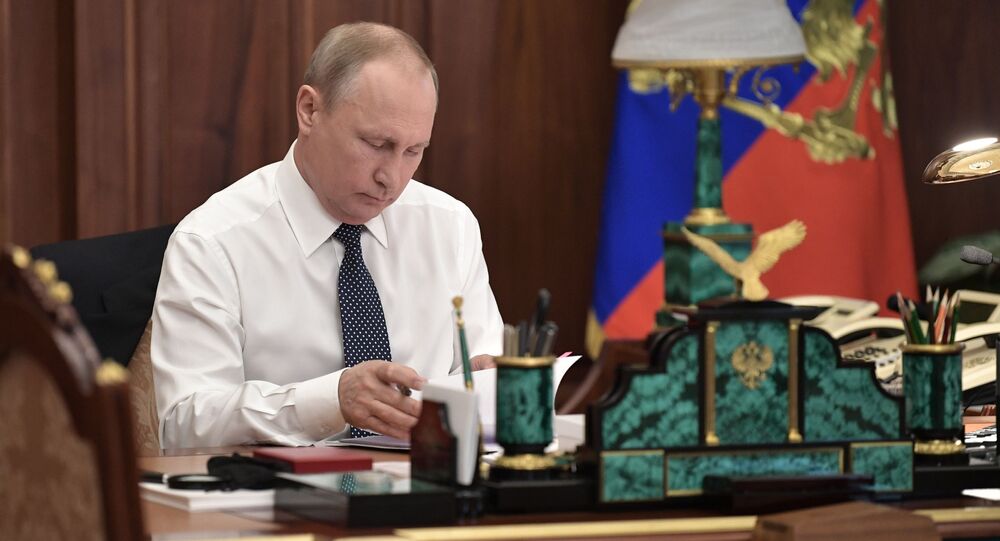 Footage related to the Russian president’s "secret room" is part of a documentary called "Russia, the Kremlin, Putin" that is due to be released on the TV channel Rossiya 1 on 21 June.

President Vladimir Putin has shown journalists from the Russian TV channel Rossiya 1 what one of its reporters called the president's "secret room".

After showing the journalists his office, Putin then told them that "there are a dining room and a relaxation room" behind the office’s door.

"But I warn you, I did not make any preparations there [beforehand], so there is a working atmosphere in the rooms. You are probably the first [journalists] to visit it", the Russian president said.

The Rossiya 1 footage additionally showed the president’s desk in the office, where children's handicrafts and drawings, presented to him during various working trips, were seen. There was also a portrait of Russian Tsar Peter I seen on the office’s wall.

When briefing the reporters on his "secret room", Putin noted that he sometimes contacts his grandsons when in his Kremlin office. When asked about "the atmosphere" there, the Russian president said that he "doesn’t even think about it".

The "secret room" video is part of Rossiya 1’s documentary "Russia, the Kremlin, Putin" which is slated to premiere on the Russian TV Channel on Sunday.

Over 60% of Russians Approve of Putin's Performance - Pollster

Trump Claims Putin Likes Him, But Doesn't Want Him to Win Election in 2020