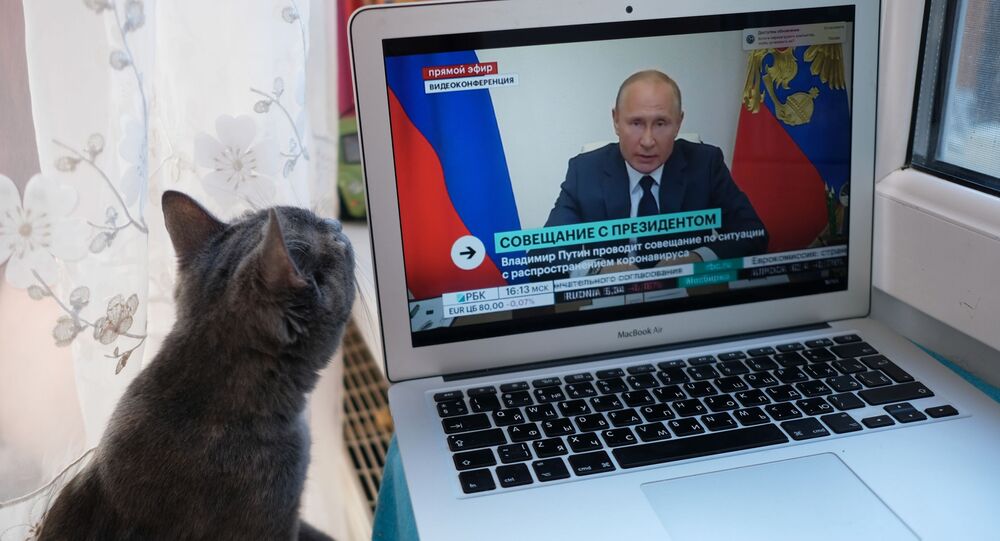 The Russian president first announced a period of nationwide 'non-working' days for non-essential workers in late March, extending them through the month of April and into early May as part of the country's effort to curb the spread of the novel coronavirus.

The period of state-mandated days off work for non-essential workers will end May 12, Russian President Vladimir Putin has announced. This will allow sectors of the economy, including construction and agriculture, to resume their work, on the condition that they continue to follow strict safety rules.

"Starting from tomorrow, May 12, the national period of non-working days will be over for all sectors of the economy," Putin said, speaking at his latest videoconference meeting with medical officials, ministers and governors on Monday on the state of the coronavirus situation in the country.

Putin stressed that sanitary measures such as social distancing, restrictions on mass events, and mandatory wearing of facemasks in public will remain in place (pending regional authorities' decisions). Furthermore, the president said he still wants Russians in high risk categories, including seniors over the age of 65, to remain indoors.

Elsewhere in his remarks, Putin praised the health care system's generally effective response to the pandemic, pointing to a dramatic increase in hospital beds for COVID-19 patients from 29,000 when the crisis started to 130,000 now.

The president also suggested that the high mortality rate observed in some countries was connected to health care systems there being overloaded, saying this was not a problem experienced in Russia so far. Putin also praised the ramping up of COVID-19 testing in Russia to reach one of the highest levels in the world.

"As the experience of the world has shown, it was the unpreparedness and overwhelming of health care systems that became the main cause of high mortality. This did not allow those who could be helped to be saved. And we, again, can now provide such assistance," Putin said.

Reporting its first COVID-19 case in March, Russia's total reported infection rates have spiked to over 221,000 in the past two and a half months. As of Monday, the country's coronavirus-related mortality rate is just 2,009, less than one percent of total infections, with most fatalities suffered by people over the age of 65 with prior health conditions.

On Sunday, Russia's Rospotrebandzor consumer protection agency reported that over 5.4 million coronavirus tests has been carried out in the country to date, accounting for roughly 3.5 percent of the country's population of 146.7 million.

© Sputnik / Евгений Биятов
Woman prepares to get express-test on coronavirus at the Hadassah Medical Moscow clinic in Skolkovo, April 29, 2020.

In his remarks Monday, Putin also extended emergency powers to regional heads, urging authorities throughout Russia's regions to implement coronavirus containment measures based on the situation in their territory. Regions will continue to have the power to tighten or ease restrictions at will, if necessary, the president said.

Putin also promised new federal measures to provide support for Russia's battered economy, and particularly the sectors hit hardest by the pandemic. Over the past month, over 1.4 million people have been left unemployed, with incomes across the retail sector down by 25 percent, and total economic activity falling by some 33 percent since the crisis started.

New measures proposed by Putin include employment support loans, additional payouts to families with children, and wage subsidies to companies which have kept 90 percent or more of their employees for the months of April and May. Other proposed measures include tax write offs for small businesses for 2020 Q2, and tax breaks for individuals for the year 2019.