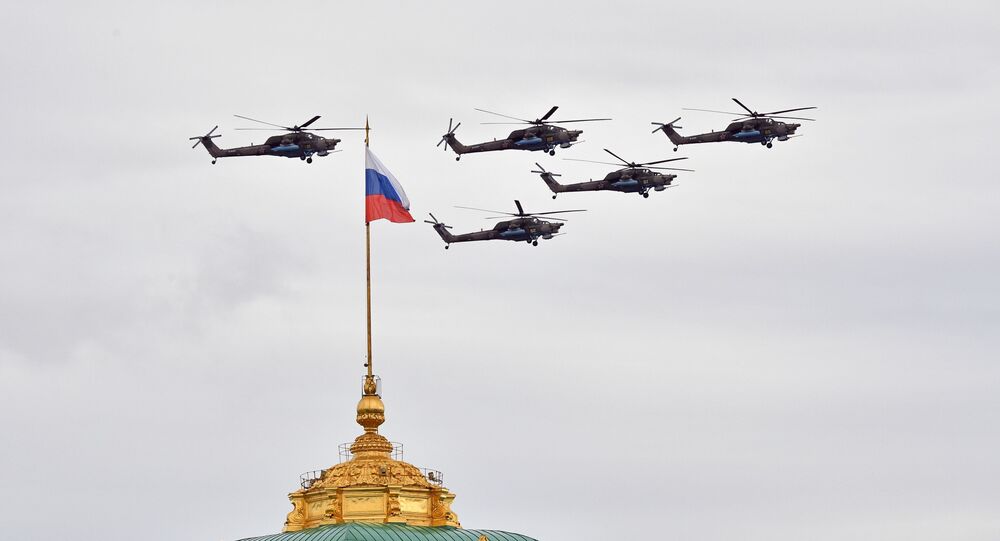 President Vladimir Putin earlier announced that events in Moscow and elsewhere in Russia dedicated to the 75th anniversary of the Soviet and allied victory over Nazi Germany would be postponed due to the ongoing COVID-19 pandemic, but that the air show and fireworks would still take place.

A total of 75 military helicopters and planes flew over Red Square and the Kremlin in Moscow on 9 May, in an aerial parade dedicated to the 75th anniversary of Nazi Germany’s defeat in World War II.

The vehicles were followed by Mi-35Ms as well as the Ka-52 “Alligator” and the Mi-28N "Night Hunter" all-weather combat helicopters.

The aircraft part of the parade began with an A-50U reconnaissance plane and the Il-76MD military transport aircraft flying over Red Square.

After that, the skies over Moscow were filled with the roar of the turboprop engines of the Tu-95MS long-range strategic bomber, followed by four Tu-22M3s and a Tu-160 bomber.

During the air show, the Il-78 aerial tanker simulated air refueling for the Tu-160, a supersonic strategic bomber, which is designed to defeat the most important targets in the enemy’s rear lines with nuclear and conventional weapons and which is capable of carrying 12 cruise missiles on board.

Also in the air were the fifth-generation stealth fighter jet Su-57, the Su-34 fighter-bomber, as well as the Su-35S and the Su-30SM fighters. As for the S-35S, it is a 4++ generation platform sharing some of the advanced features of the Su-57, including a cutting edge thrust-vectoring engine system giving it supermaneuverability, which allows the plane to perform tactical maneuvers not possible with aerodynamic mechanisms alone.

The legendary aerobatic teams, the Russian Knights and Swifts, then flew over the Red Square, in what was followed by six Su-25 attack aircraft, closing the aerial parade and emblazoning the sky with the colours of Russia's national flag.

President Vladimir Putin earlier announced the postponement of WWII Victory Day-related events in Moscow and beyond due to the coronavirus pandemic, but added that the air show and fireworks would take place on 9 May.