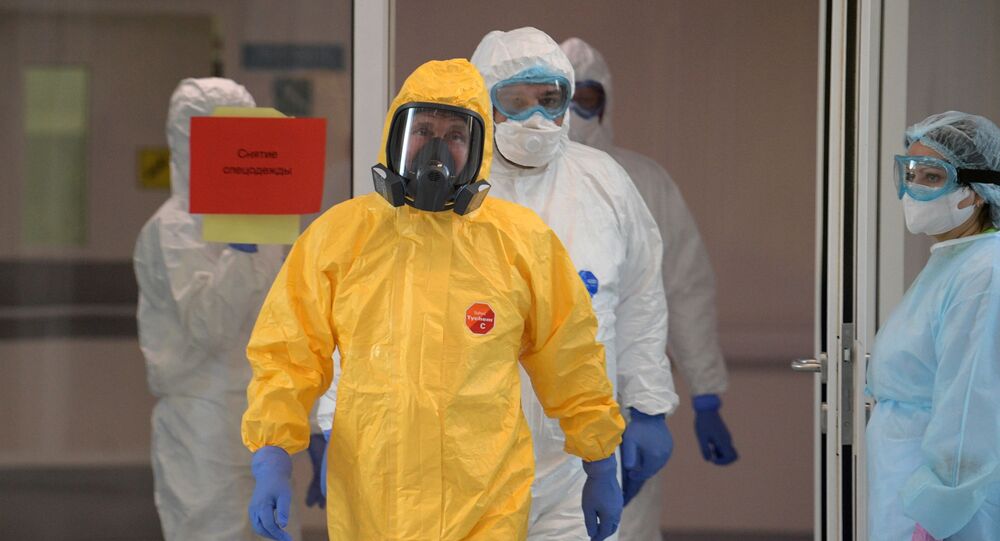 The number of people infected with COVID-19 in Russia remains relatively low, with 1,534 confirmed cases registered across the country so far. Most of them live in Moscow and those in need of treatment are receiving it at Communarka Hospital, which has been specifically designated to deal with the novel virus outbreak.

The spokesman for the Russian president, Dmitry Peskov, shared in an interview with the Rossiya 1 TV channel that Vladimir Putin's recent visit to the hospital in Communarka in Moscow, which is treating patients who have confirmed coronavirus infections, was spontaneous and that no prior preparations normally made ahead of such occasions were carried out.

Peskov also commented on Putin's decision to enter the quarantine zone and meet COVID-19 patients himself, saying that such decisions are not something extraordinary for the president.

"You know, it's just in his style: he prefers to see the situation 'on the front lines' with his own eyes [...] Putin would not be himself if he hadn't decided to go in there. After all, necessary precautions were taken to limit risks [of exposure]", he said.

Chief hospital nurse Lyudmila Larionova, who filmed the president's visit on her phone, said that she was "shaken" by Putin's decision to enter the "coronavirus wing", adding that she often experiences that people are afraid of going there.

The president's spokesman, in turn, noted that the phone the nurse was using to film Putin's visit had to be found "in a rush", as no proper filming equipment had been prepared for the president's unexpected visit to the hospital. Peskov noted that it was important that he show the encounter to the media, as Putin rarely bothers with such small details.

State of Coronavirus Outbreak in Russia

The Communarka Hospital remains the main centre in Russia for treating COVID-19 patients, most of whom live in Moscow. Some 1,014 coronavirus cases have been reported in Moscow and a total of 1,534 across the country, along with nine fatalities.

© Sputnik / Алексей Дружинин
Putin at G20: World Can't Afford to Act in 'Every Man for Himself' Manner Amid Coronavirus Crisis

Despite the relatively small scale of the outbreak, Russia has already taken major preventive measures to stop the spread of the virus, closing its borders to non-essential travel, reducing movement within the country, banning new bookings at hotels and resorts, transitioning all school activities to an online format, and directing companies to have their employees work from home when possible.

Putin: Russia May Defeat Coronavirus in Less Than 3 Months

Putin at G20: World Can't Afford to Act in 'Every Man for Himself' Manner Amid Coronavirus Crisis