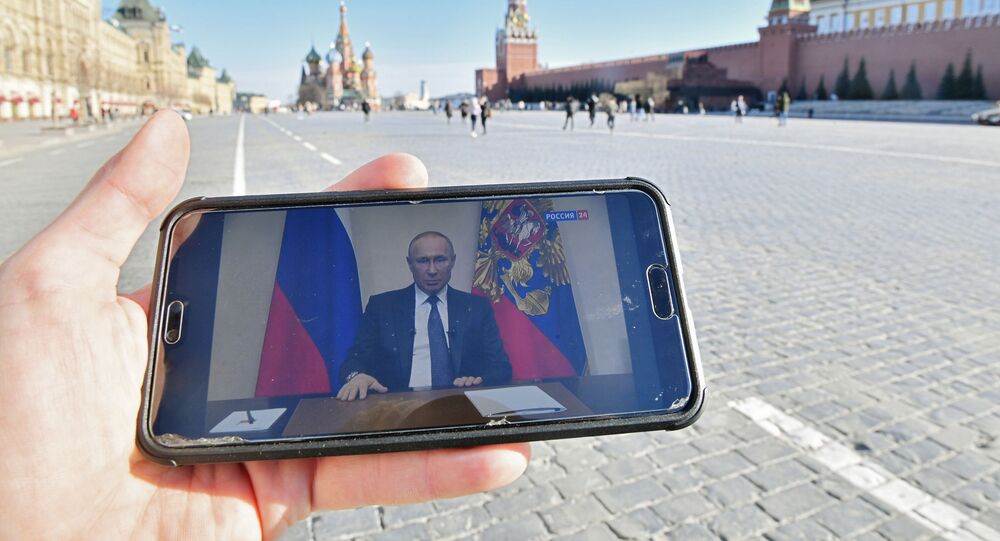 President Vladimir Putin spoke in a televised address on Wednesday to apprise Russians of the government's coronavirus response and measures to be adopted to help deal with the pandemic, as travel restrictions, quarantine for those infected with the COVID-19 virus, and vaccine testing are put in place.

The Russian President announced a postponement of the impending national vote on proposed amendments to the constitution amid the spreading coronavirus epidemic. The vote, set for 22 April, shall be rescheduled for a later date, depending on the dynamics of the spread of COVID-19 and efficacy of measures to curb it.

The health and safety of the Russian population are a priority, emphasized the Russian President.

The President announced the following work week from 28 March to 5 April will be a paid holiday in the country, while offering assurances that this would not affect the routine functioning of all essential services, including transport, stores, banks, pharmacies, and medical institutions. These measures are imperative to slow down the spread of the novel respiratory disease, stressed Putin, adding:

"Take my word for it, the safest place for you to be right now is at home.”

15% Tax on Dividends, Interest Taken Out of Russia

Another measure to be introduced is a suggested 15 per cent hike on tax dividends and interest transferred out of the country by large companies and their owners. The current rate on most such payments is 2 per cent.

The President added that this change would be coordinated with foreign nations to avoid double taxation.

As another source of emergency funding for dealing with the pandemic crisis a 13 percent tax on earnings from interest on securities in excess of one million rubles will be introduced.

"I propose that all additional revenue flows generated into the budget by way of these two pending changes shall be channeled towards financing measures to support families with children, people who have lost their jobs or were forced to take sick leave", - concluded the Russian President.

Vladimir Putin went on to outline further emergency measures to support individuals amidst the situation generated by the COVID-19, emphasizing that prolonging all social benefits will be carried out on an automatic basis.

All those facing job losses under the volatile situation will be provided with increased unemployment benefits. While the current maximum benefit for those left without work is 8,000 rubles, the sum is to be raised to 12,300 rubles (equivalent to about $155).

On sick leave, the President stated the need to establish a sick leave pay rate that should be calculated from no less than one monthly minimum wage.

Credit payments shall be suspended for individuals who are unable to pay due to loss of income.

Families with children will receive additional payments on top of existing support for children to the age of three, with the government set to fast-track plans to increase payments to children under the age of seven by June, instead of the originally scheduled July.

Families eligible for maternity benefits will be able to receive an additional 5,000 rubles for each child, in line with the newly-introduced measures.

The President urged all Russians to heed the recommendations of doctors and authorities in dealing with the COVID-19 crisis.

Russia has registered over 600 cases of coronavirus, according to the Johns Hopkins University Coronavirus Resource Center, with just one death reported last week. The country has followed in the footsteps of numerous other states struggling with the pandemic, shutting its land borders and restricting air travel to prevent the spread of the disease.

Additionally, social measures announced by the head of state included payments timed to the 75th anniversary of the Victory in the Great Patriotic War for veterans and home front workers, to be made ahead of the traditional May holidays.

Among the new measures to be introduced are tax breaks for small and medium-sized business owners. The Cabinet is being tasked with offering small businesses a six month tax holiday, apart from sale tax, while the central bank is to adopt measures that will prevent layoffs and bankruptcies.

On offer is a six month holiday on bank credit payments, including mortgage payments and consumer loans, for individuals whose monthly earnings dropped by 30 per cent or more due to the current situation over the coronavirus.
As part of changes in how personal bankruptcy will be carried out in the country, a moratorium shall be put in place on filing bankruptcy petitions by creditors , to cover companies from the sectors most impacted by the pandemic, such as tourism.