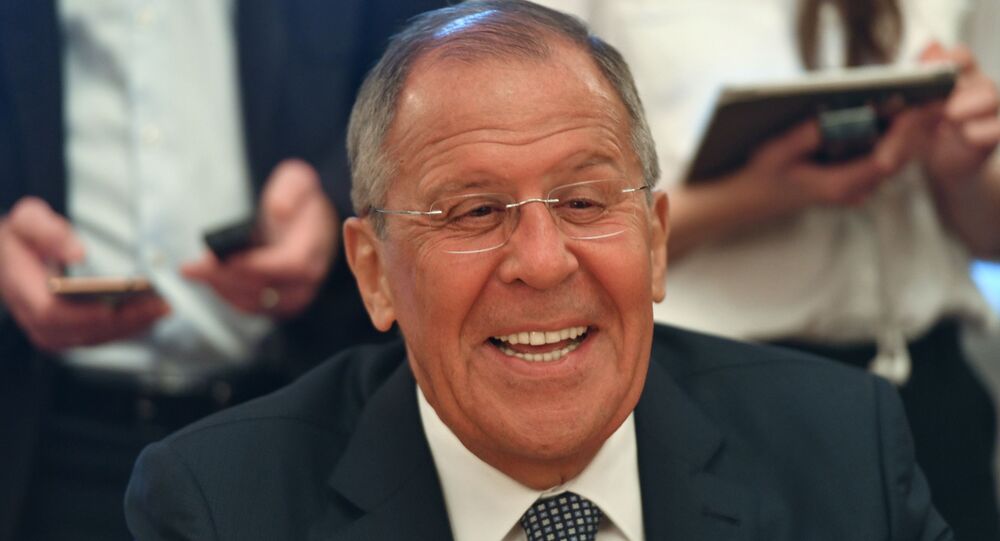 Russia's top diplomat has earned the respect of his colleagues both at home and abroad for his professionalism and the love of the public - mostly due unexpected gaffes rarely heard from people in his profession.

Led by Lavrov, the ministry went through a major shift, changing the way it handles Russia's international interests, and allowing Moscow to strengthen its positions on the global arena over the last 16 years.

Lavrov's unusual combination of taking a hard-line stance along with his ability to resort to witty remarks and jokes have left an indelible mark on international diplomacy. Here are Lavrov's main accomplishments as well as the most memorable remarks and gaffes that accompanied them.

© AP Photo / Pablo Martinez Monsivais
U.S. Secretary of State John Kerry holds up a pair of Idaho potatoes as a gift for Russia's Foreign Minister Sergey Lavrov, standing right, at the start of their meeting at the U.S. Ambassador's residence in Paris, France, Monday, Jan. 13, 2014.
© Sputnik / Eduard Pesov
The meeting between the heads of Russian Foreign Minister Sergey Lavrov and State Secretary Hillary Clinton takes place at the Intercontinental Hotel in Geneva. Hillary Clinton presented the Russian Foreign Minister with a souvenir in the form of a button on which the Russian word "reset" is written in English letters.

Despite being known as one of the toughest nuts in his profession to crack, Lavrov is also famous for unconventional, often witty, responses to the most provocative questions and comments, as opposed to standard bland diplomatic language.

Apart from being considered one of the best diplomats in the world by his colleagues, Lavrov is also a poet who writes poems and songs, although he has been left with little time for his hobby due to his responsibilities. One of his songs even became the official anthem of Russia’s main university for preparing future diplomats, MGIMO, albeit with minor changes to the text.