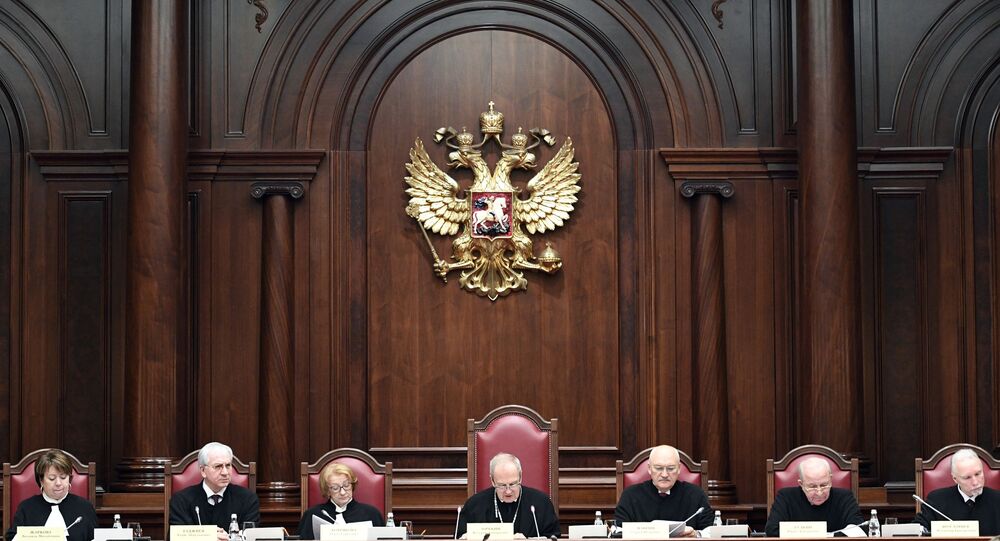 Russia's Constitutional Court: President Can Serve More Than Two Terms If Has Support of the People

Last week, Russian President Vladimir Putin indicated that whether or not he would have the hypothetical right to run for another term in office under a revamped constitution would depend on what the Constitutional Court had to say about the idea.

President Putin will be able to serve more than two terms if he has received support to do so from the Russian people, Russia's Constitutional Court has ruled.

In a ruling published on its website on Monday, the court approved a number of proposed changes to Russia's constitution, including a provision which would hypothetically allow Russian President Vladimir Putin to serve two more terms, pending public approval in a national vote set to be held on April 22.

Under the constitution, a president of Russia only has the right to serve two consecutive terms in office before leaving the post to someone else. In January, President Putin proposed sweeping changes to the country's basic law, with the proposed amendments discussed extensively by the country's legislative organs in the months since. Among the proposals was an initiative to remove the word "consecutive" from the wording on term limits to limit the number to two terms only.

However, last week, Valentina Tereshkova, a veteran lawmaker from the ruling United Russia Party, proposed that changes to the constitution should reset the term counts of current and former Russian presidents. This, theoretically, would allow them to each run for two more six-year terms. Putin himself told lawmakers that he was opposed to the idea of removing restrictions on the number of terms a president can serve, but left it to the Constitutional Court to evaluate Tereshkova's proposal.

The Duma approved the bill on proposed amendments to the constitution last Wednesday, with the opposition Communist Party abstaining, while 383 lawmakers (including 343 from United Russia) voted in favour. Russia's Federation Council, the upper house of parliament, approved the bill the same day. Putin also signed the law, pending approval from the high court and a national vote slated to be held next month.

Putin is expected to complete his second consecutive term in office in 2024. Last week, presidential spokesman Dmitry Peskov told reporters that whether or not Putin participates in the 2024 elections would depend on a multitude of factors, including the state of the world economy. He added that Tereshkova's proposal was a surprise for the Kremlin.