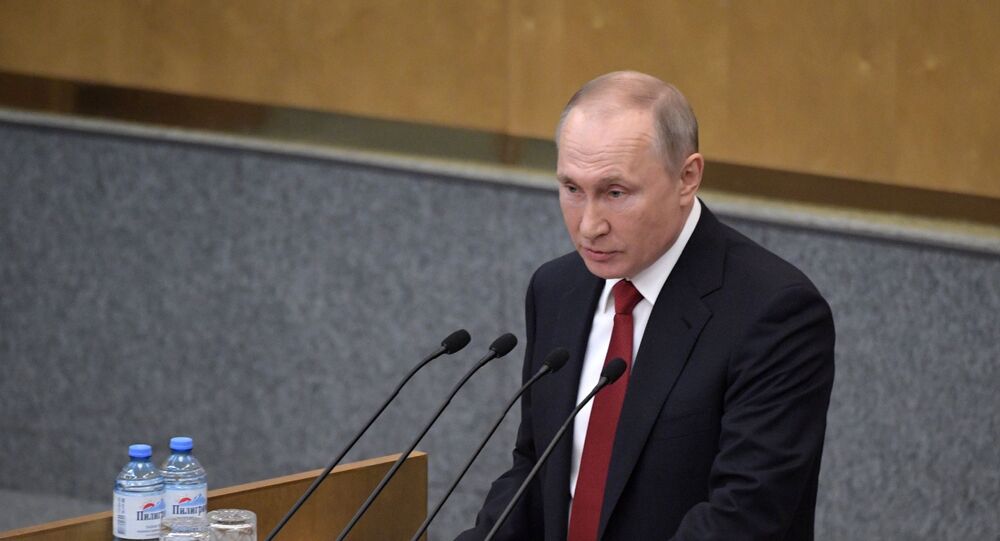 Putin Says No Need to Do Away With Presidential Term Limits

Putin proposed sweeping changes to Russia's Constitution in January, with Russians set to go to the polls next month to vote on the proposed amendments, which have been discussed extensively by Russian legislative organs in recent weeks.

Russian President Vladimir Putin has spoken out against a proposal to remove constitutional limits on the number of terms a president can serve.

"The proposal made by [United Russia lawmaker] Valentina Tereshkova to exclude the number of terms a president can serve from the constitution is understandable. This practice exists in many other countries, including among our neighbours," Putin said, speaking to Duma lawmakers in Moscow on Tuesday.

"Stability must be the priority, but society should have guarantees about the regularity of a [change] of power. I consider it inappropriate to remove from the constitution restrictions on the number of presidential terms," Putin added.

"At a time when the country still has a lot of problems, but when the political, economic and social spheres have gained a sense of internal stability, of maturity, when the state is doubtlessly becoming more powerful and difficult to assail from the outside, the possibility of a change of power comes to the forefront. This is necessary for the dynamics of the country's development," Putin said.

At the same time, commenting on Tereshkova's other proposal, which suggests resetting the term limit clock in the event of the passage of the proposed amendments, Putin said the legality of this initiative would have to be evaluated by Russia's Constitutional Court.

Putin, whose second consecutive presidential term runs out in 2024, has repeatedly commented on the importance of constitutional guarantees to "rotation in office," which he said was "important" for Russia. At the moment, the president can serve an unlimited number of terms, but no more than two of them consecutively.

During Tuesday's address, Putin stressed that the proposed constitutional amendments were long overdue, and called on the country to work together in a consolidated manner amid the difficult situation emerging in global politics, security and economics.

He added that he did not believe in the need for snap parliamentary elections, as proposed by Liberal Democratic Party of Russia opposition leader Vladimir Zhirinovsky. Putin added however that the final decision on that matter would be up to lawmakers.

He noted that the final voice on whether the constitutional amendments would pass or not would be given to the voters. "However you vote on April 22, so it will be," Putin said.

Following Putin's remarks, the Duma approved the proposed amendments to the constitution in the second reading, stipulating that the incumbent president and former heads of states can take part in new presidential elections regardless of the number of terms they've served prior to the amendment entering into force. This, in theory, means that Putin can run again in 2024, notwithstanding the sentiments he expressed ahead of Tuesday's vote.