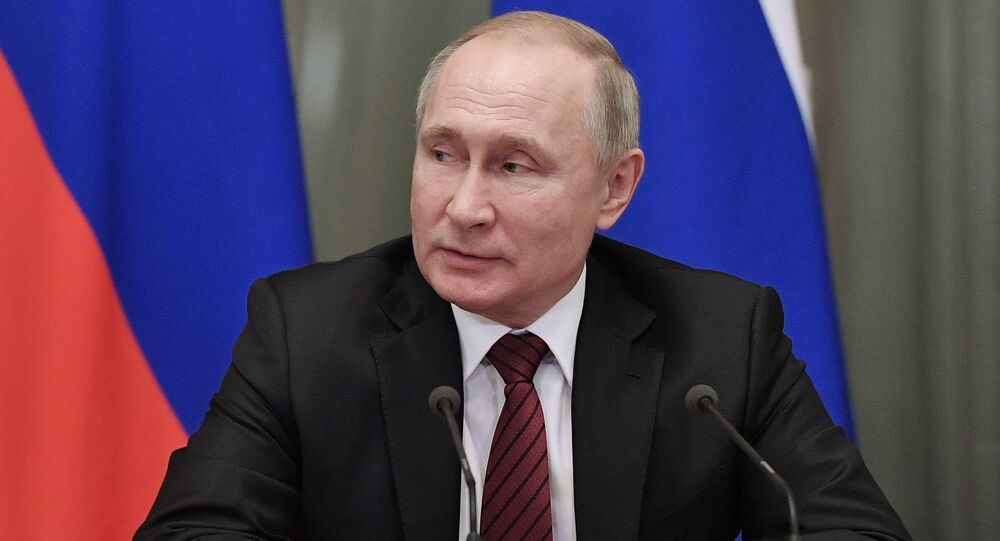 'We Don’t Plan to Go to War With Anyone': Putin Reveals Why Russia is Developing Hypersonic Weapons

Late last year, Russia deployed a hypersonic nuclear-capable missile system Avangard, which is outfitted with pioneering advances in speed and manoeuverability, as part of the country’s drive to move forward with the development of hypersonic weapons.

In an interview with the TASS news agency as part of its “20 questions with Vladimir Putin” project, the Russian President stated that Moscow has no plans to go to war with any country.

“We’re not going to go to war with anyone, but we are creating a situation in the defence field so that it doesn’t occur to anyone to fight us”, Putin said

Separately, he touched upon the Russian hypersonic weaponry which he said helps preserve strategic stability in the world.

Putin noted that the US created its missile defence system in order to "disrupt this strategic stability and strategic balance."

According to him, Washington believed that "if they create an anti-missile umbrella, the other side [adversary] will be unable to respond in kind in case of its using nuclear weapons”.

“But by creating these modern [hypersonic] systems, including those that easily penetrate any missile defence system, we maintain this strategic stability and strategic balance. This is fundamentally important not only for us, but also for international security, Putin emphasised.

The interview was released after Russian Defence Minister Sergei Shoigu said on Friday that tests of cutting-edge Russian hypersonic weapons are continuing in the Northern Fleet.

“Testing of new weapons, including hypersonic, is ongoing. All of this will allow us to qualitatively increase the combat potential of the Northern Fleet and other fleets of the Russian Navy", Shoigu stated.

During his annual address to the parliament in 2018, Putin said that Russia had created and started mass production of the hypersonic weapon Avangard, which is able of carrying out intercontinental flights at the hypersonic speed of Mach 20 and higher.

He also provided details about a state-of-art Russian missile system using the heavy intercontinental missile Sarmat, which can be equipped with nuclear warheads, including hypersonic ones.