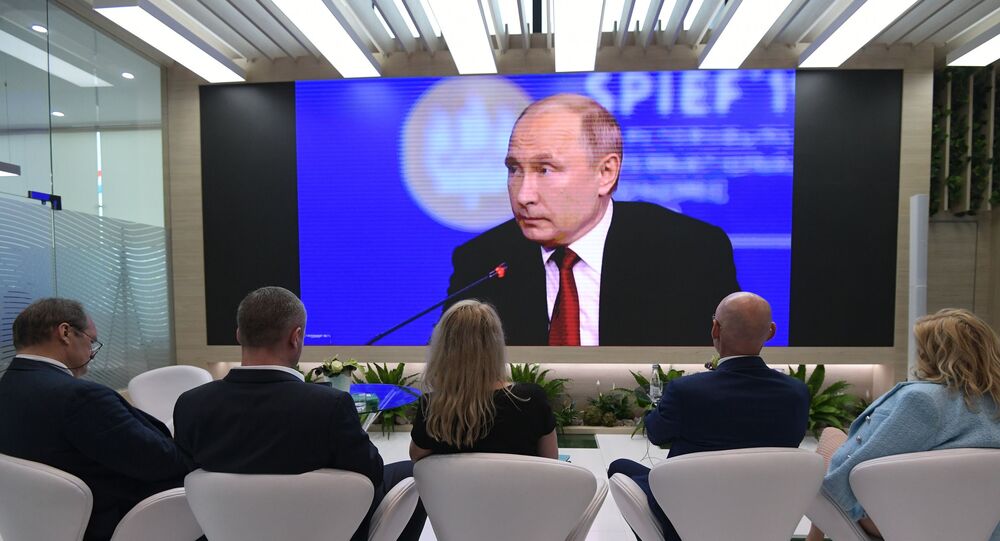 Certain phrases used by Russian President Vladimir Putin can be considered to be, to some extent, almost impossible to interpret, Putin's translators admitted during the Rossiya 1 TV show "Moscow.Kremlin.Putin".

An adviser for the Department of Linguistic Support of the Ministry of Foreign Affairs (MFA), Alexey Sadykov, introduced an example of an expression that previously had him baffled.

"He [Vladimir Putin] said: 'We will not stand in '*Vraskoryaky'", Sadykov recounted, adding, "I was a rookie translator and I watched a report on TV, and I thought - Thank God I didn't have to translate this. At the time, ten years ago, it seemed very very difficult to me, and it is still difficult".

Sadykov noted that Putin occasionally uses surprising expressions that can momentarily numb linguists. For example, speaking on the sidelines of the St. Petersburg Economic Forum (SPIEF) in 2017, Putin jokingly told a standing audience: "Volno!" ("at Ease!").

"This was a completely unexpected moment, no one could have foreseen it. It took me half a second to come up with the right option, then I checked with the vocabulary. This was merely a translator's guess, because back then I did not remember this term", Sadykov recalled.

The Third Secretary of the MFA Linguistic Department, Natalia Krasavina, recalled that the phrase "Donbass Porozhnyak ne gonit" was long discussed among professional interpreters. It was eventually translated as "Donbass does not say nonsense".

*'Vraskoryaky' - the closest meaning in English is to 'stand or walk in an unstable and uncomfortable way on shaky ground, while holding a strange or anomalous physical posture, and continuing to do an activity requiring focused attention and detail". The term derives from 'koryaviy' - 'clumsy' or 'clumsiness' in English - and is sometimes used in the Russian language to comprehensively describe a precarious or disadvantageous position or situation.

Always a Step Ahead: Putin Reveals What Russia Will Do in Case Nuclear Weapons Become Obsolete