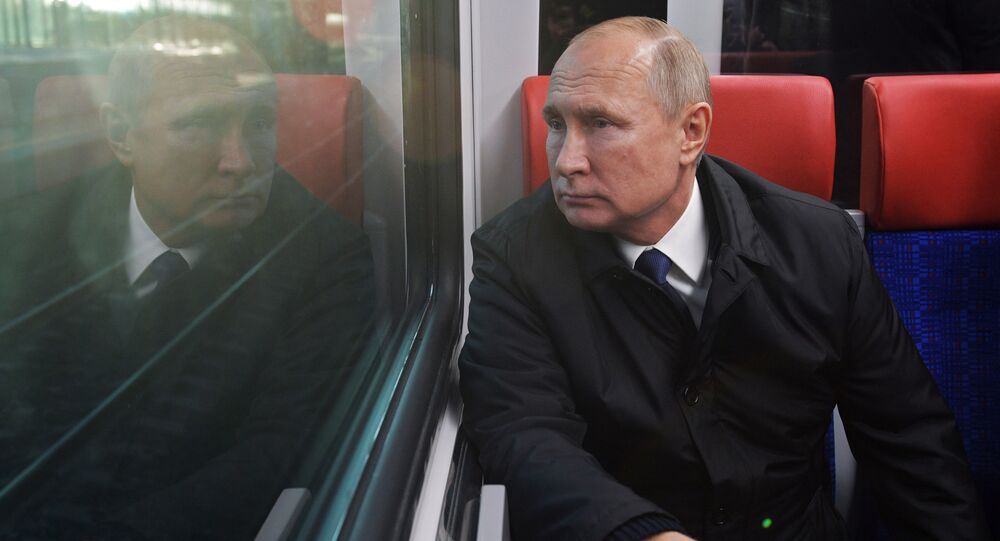 The Russian president’s intent to retain the "mother" and "father" terminology in the country’s constitution instead of adopting their "politically correct" analogues elicited a mixed response globally, with him being praised as a champion of traditional values by some and labeled as "outdated in his way of thinking" by others.

The issues of gay rights and family values in Russia have been thrust into the limelight again this week, after Russian President Vladimir Putin held a meeting on the upcoming constitutional reform, where he was told about calls to enshrine the status of the family as "a union between a man and a woman" in the Russian Constitution.

As there is currently no provision regarding this matter in the Russian Constitution, the president pointed out that a union between a man and a woman is called a marriage, and that "it’s a bit different with a family", and advised to carefully consider the wording.

Putin also broached the subject terminology related to family matters, stating that Russia won’t substitute the traditional "mother" and "father" for "parent number 1" and "parent number 2" as long as he remains president.

The president’s remark evoked a mixed response in the West, with some media outlets claiming that Putin has taken a stance against gay marriage.

The Russian president’s stance was, perhaps predictably, met with cheers and approval from the proponents of traditional values and people who take a dim view on so-called political correctness.

His sentiment was echoed by English media personality and columnist Katie Hopkins who said that "it's been a long time waiting for someone with strong leadership to be very clear on this issue".

"We saw this creep in in the U.S., the USA change that forms, I think, in 2011. So they took off the terms mother and father and put parent one and parent two. But I think when we see bold leadership, we see this willingness to be clear", Hopkins explained.

Ex-MEP Nick Griffin also remarked that for Putin to defy "LGBTQ lobby and the anti-national dogmas of globalism" both at the same time is nothing short of "an act of political courage", adding that the Russian head of state’s proposals are "simply common sense".

Queer Eye for the Straight Guy

Advocates of gay rights and gay marriage, however, were not as jubilant, with UK-based online newspaper Pink News claiming that the Russian president "vowed to keep gender-specific language to underline the country’s opposition to same-sex relationships".

Veteran British LGBT human rights activist and gay marriage campaigner Peter Tatchell insisted that Putin essentially refuses to "recognize the reality" that not all parents, even if they are not always a mother and father, love their children.

"Same-sex parents deserve legal recognition and protection for themselves and their children. Being a small minority, they in no way threaten or replace traditional parents and families", he said.

Kryss Shane, an LGBT expert and public speaker from the United States, also alleged that President Putin was trying to "stop the already present love between two people of the same gender identity and sever families who have LGBT+ parents".

Arguing that Putin's comments "may force LGBT+ people to love more quietly", Shane described the Russian president as "outdated in his way of thinking", postulating that  "in reality, LGBT+ love and LGBT+ families have always existed in the past, they currently exist, and they will always exist."

Philip Baldwin, a UK-based LGBT rights activist, also weighed in on the matter, saying that "LGBTQ people make great parents", and one day he might want to "adopt or have children through surrogacy".

"I find it deeply hurtful that President Putin would suggest that I should not be a parent. [...] It is by working towards an inclusive and tolerant society that all of us, straight or gay, can create a world where we would happily bring up our children and where we can thrive together", he added.

While some pundits discussed possible consequences of Putin’s statement for LGBT rights and political correctness, an independent political analyst from the US named Stephen Ebert turned his attention instead towards the context - the constitutional amendments in the works.

"Putin’s call for the "new" Constitution to specifically "protect" traditional family values by stating a family consists of "a mama and a papa, not a "parent #1 and #2" raises the concern that in enumerating or proscribing this "requirement", but not others, it may have the unintended consequence of opening up the floodgates for dissidents/proponents of other non-mainstream ideas to say "but the constitution does not specifically prohibit these", Ebert mused.

Meanwhile, a Belgian human rights activist Andy Vermaut complained about the sheer volume of disinformation he says is "being spread about the Russian president and Russia", and about "how a nuanced opinion is being taken out of context".

"There is tolerance for homosexuality in Russia, only it is an individual choice between people. The cornerstone of society in Russia is still the traditional family, but apart from that gays do have the right to be gay in Russia, something that cannot be said of a lot of countries in the world", he explained. "Putin believes that the legislator should not interfere with people's individual choice. Now you see again how everything is being used to misrepresent Russia and President Putin's statements are being misrepresented by completely distorting [them]".

Previously, Vladimir Putin's statement elicited a somewhat mixed response around the world, as the British Foreign Office urged the global community to fight against the discrimination of LGBT people, adding that it feels proud that gay marriage is legal in the UK.

At the same time, Italian MP Vito Comencini called Putin's stance on this matter an example of the protection of Christian values and traditional society.