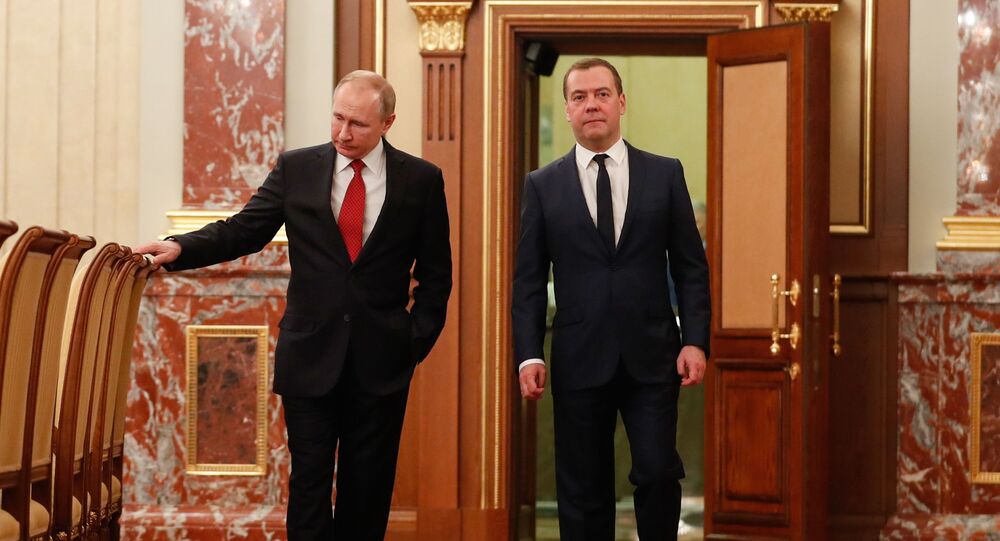 The Russian president addressed lawmakers, ministers and other high-ranking officials on Wednesday, with this year's address focusing mostly on domestic politics including social policy and the economy, but also proposals to amend the country's basic law.

Russian Prime Minister Dmitry Medvedev has announced that the country's government will be resigning.

Speaking to President Vladimir Putin in Moscow on Wednesday, Medvedev said that the president's speech to the Federal Assembly earlier in the day outlined a number of "fundamental changes" to Russia's Constitution.

"These changes, when they are adopted, and in all likelihood this would be done following discussions, as was said, will make significant changes not only to a number of articles of the Constitution, but also to the balance of power as a whole," Medvedev said.

The changes outlined by the president will apply to "the executive branch, the legislative branch, and the judicial branch," the prime minister continued.

"In this context, it's obvious that we, as the government of the Russian Federation, should provide the president of our country with the opportunity to make all the decisions necessary for this. And in these circumstances, I believe that it's correct that, in accordance with Article 117 of the Constitution, the Russian government in its current composition should resign," Medvedev said.

Putin thanked Medvedev for his work, and urged the prime minister and the cabinet to remain at their posts until a new government could be formed.

Later in the day, Putin signed a decree approving the government's resignation. "This decree comes into force on the day of its signing," the Kremlin confirmed. According to the decree, the Medvedev government will continue to fulfill its duties until the new government's formation.

Following the formation of the new government, Medvedev is expected to take up the newly created position of deputy chairman of Russia's Security Council, a powerful consultative body which advises the president on national security affairs. Medvedev agreed to take up the new post.

Petr Tolstoy, the Russian lower house of parliament's deputy speaker, said that the government's resignation will not affect the implementation of the proposed measures outlined by Putin.

"As for the implementation of the address, I am almost 100 percent certain that today's important changes will not affect the initiatives, because the president's message is a direct appeal to all branches of power, and we will all work to implement it as quickly as possible," the senior lawmaker said.

Earlier Wednesday in his speech to lawmakers, Putin presented a number of proposed changes to Russia's Constitution, including new limits to the president's appointment powers. This includes increased powers to the country's parliament in appointing members of the government, and reduced powers for the president in rejecting candidates. Putin also proposed barring senior officials, including lawmakers, governors, the prime minister and others from being able to hold dual citizenship and foreign residence permits. The proposed amendments also include changes clarifying that Russian laws have priority over international laws in instances where they contradict Russian legislation.

Putin selected Dmitry Medvedev for the post of prime minister in May 2012, and reappointed him in 2018 after beginning his fourth presidential term. Medvedev served as Russia's president between 2008 and 2012, during which time Putin served as prime minister.