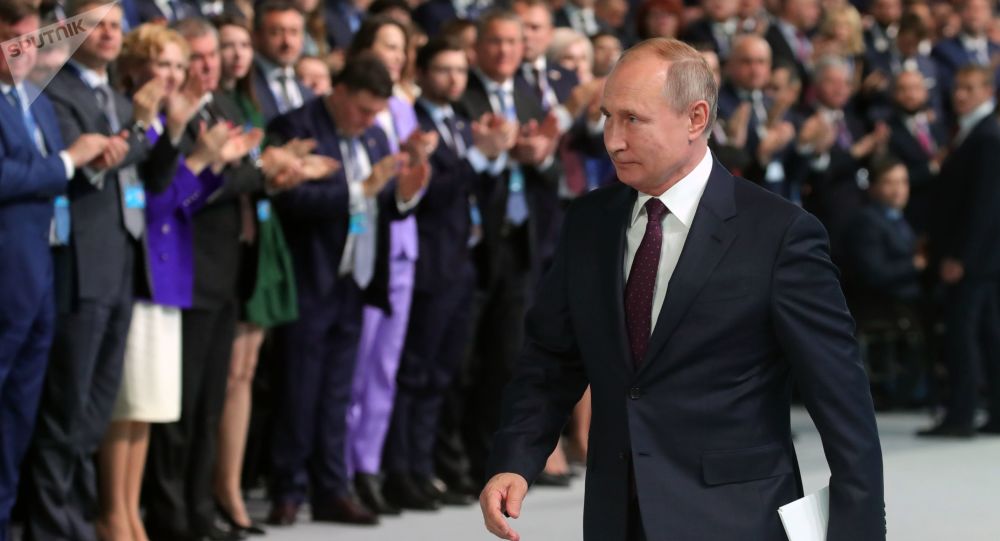 US Media Reveals Putin's ‘Most Remarkable’ Achievement in 20 Years

During the 19 December end-of-the-year press conference, President Vladimir Putin specifically underscored Moscow’s assertiveness in the face of the West’s ongoing sanctions pressure against Russia, saying that the country’s “economy has adapted to foreign shocks”.

Summing up the results of Vladimir Putin’s presidency over the past twenty years, Bloomberg claimed that “one of the most remarkable things” is the Russian president’s ability to continue extending the country’s global reach “on a shoe-string [domestic] budget”.

With the US injecting more than double in defence than Moscow spends on everything, Russia is “once again a major power in the Middle East and it’s expanding in Africa for the first time in a generation”, according to Bloomberg.

Under Putin, the government’s balance sheet became “one of the healthiest in the world, earning praise from rating agencies and the International Monetary Fund", the news outlet goes on to say, referring to the Russian President’s “fiscal prudence”, especially after the beginning of the Ukrainian conflict.

During Putin’s presidency, Russia also managed to restore “some of the geopolitical might wielded by the Soviet Union, irking most of NATO’s 29 nations in the process”.

On top of that, Putin boosted Moscow’s relations with Beijing, reunited Crimea with Russia, “turned the tide of the war in Syria, sold advanced air-defence systems [S-400] to NATO-member Turkey and reached major arms and oil deals with a key US ally, Saudi Arabia, as well as Venezuela”, Bloomberg pointed out.

In this context, the news outlet quoted Thomas Graham, a senior Russia policy official in George W. Bush’s two administrations, as saying that “if you compare Russia today with 2000, when Putin came to power, it’s in a much better position”.

Bloomberg’s report comes after Putin’s end-of-the-year conference on 19 December, when the Russian president, in particular, praised his country’s ability to say afloat in the face of the West’s ongoing sanctions pressure.

“Russia’s economy has adapted to foreign shocks”, Putin noted, also referring to the Russian currency, the rouble, which he said “had become more resilient to fluctuations in oil prices”.

‘United States is a Great Country’: Putin Says Russia, US Have Common Interests, Should Cooperate