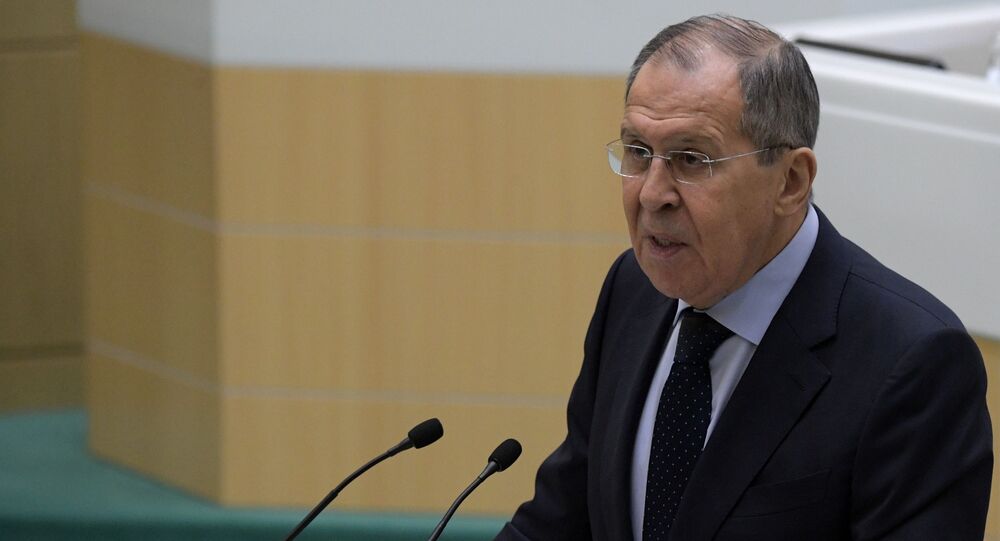 "Russia's approach to the future of new START has been clearly formulated by Russian President [Vladimir Putin]. We are for its extension without preconditions. As for the timing, Vladimir Putin said that Russia was ready to extend the agreement 'immediately, as soon as possible, before the end of the year'", Lavrov said.

According to the foreign minister, there are no deadlines on when the extension must be decided, but it should be ready by the time the current agreement expires on 5 February 2021.

"This means not only reaching agreement with the Americans but carrying out certain procedures in the Federal Assembly [Russian parliament] because it would require changes to the Federal Law No1 dated 28 January 2011, about the ratification of the New START treaty. So there is not much time left", Lavrov said.

The United States is rudely meddling in the European business affairs by introducing sanctions against Nord Stream 2 pipeline, which is set to carry Russian gas to Europe, Lavrov believes.

"The construction of Nord Stream 2 pipeline is close to completion, which is why its opponents have intensified their attempts to derail the project. Adding sanctions to US 2020 defence bill is a rude and cynical interference in European business affairs", Lavrov said.

According to the Russian foreign minister, this bill is not protecting European energy security, but promoting US liquefied natural gas on the European market.

"This is a blatant example of unfair competition and politicisation of the energy field", Lavrov said.

At the same time, the minister said he was certain the pipeline would be completed.

"Europe is aware of the advantage that comes from having an additional export route, although, unfortunately, there are countries prepared to work for their leaders from across the ocean even when it goes against their own energy security and well-being of their fellow citizens", Lavrov said.

The foreign minister also added that Russia is not interested in a confrontation with the United States, but will "adequately" respond to Washington's aggressive actions.

"[Russia] realistically evaluates prospects for future Russia-US dialogue, especially in light of the US' domestic political environment and the approaching presidential election. Washington's recent unfriendly actions are telling. From our side, we will continue to secure Russia's interests ... and adequately respond to aggressive behavior. However, we are not ourselves interested in confrontation", Lavrov said.

Last week, US President Donald Trump signed the $738 billion National Defence Authorisation Act, which includes sanctions against the Nord Stream 2 and TurkStream gas pipelines along with a range of other measures.

Russia is ready to host a meeting of the Group of Seven (G7) in Moscow, St. Petersburg, Sochi or Yalta, Foreign Minister Sergey Lavrov stated.

"As [Russian] President Vladimir Putin has said, if our partners want to come to us, we will be glad. I will add that we can receive them in Moscow, St. Petersburg, Sochi or Yalta, for example", Lavrov said.

When asked about Russia's possible return to the Group of Eight (G8) in 2020, the foreign minister said that the country had not actually left the format.

"Let us stick to proper terms. It was not Russia who left the G8. I will remind you that after the coup in Ukraine in the beginning of 2014, the other seven members of the group refused to take part in events chaired by Russia. Otherwise speaking, it was exactly the G7 who left the format", Lavrov said.

The G8 format was in place from 1998-2014 but was then reduced to the G7 due to disagreements with Russia regarding the events in Crimea and Ukraine. The G7 has accused Moscow of interfering in Ukraine’s domestic affairs and introduced sanctions on Russia as a result. Russia has refuted the claims.

US President Donald Trump has expressed the belief that the G8 format with Russia's participation would be more efficient than the G7. However, Kremlin spokesman Dmitry Peskov has said that Russia now focuses on other formats. He has also said that "hypothetical discussions are hardly possible," when asked whether Russia will agree to return to the G8, if invited.