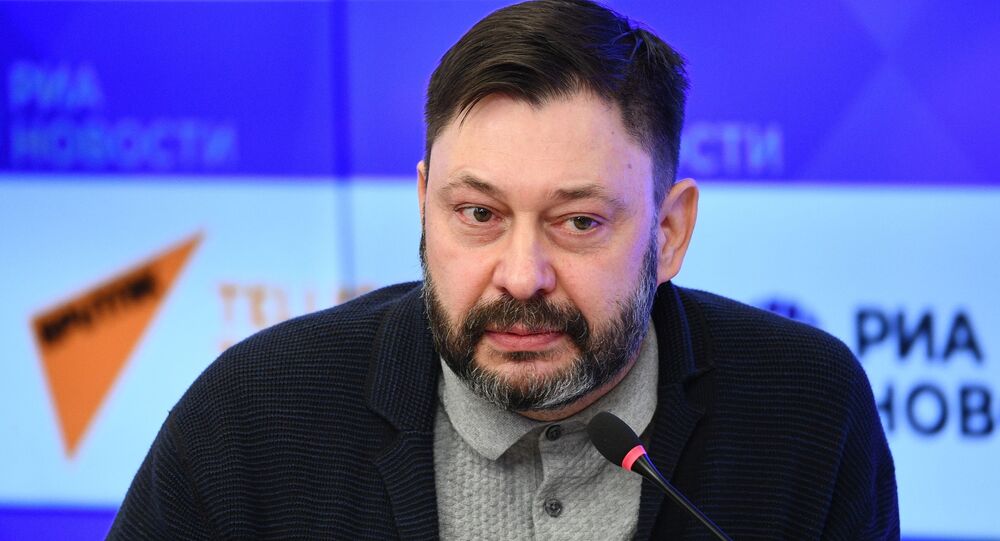 MOSCOW (Sputnik) - The Rossiya Segodnya International Information Agency's executive director, Kirill Vyshinsky, has started a photo trend to support Sputnik Estonia journalists who have been threatened with criminal prosecution in the Baltic nation for their work for the news agency, Rossiya Segodnya press service said.

According to Rossiya Segodnya, Vyshinsky, who spent 15 months in a Ukrainian prison for performing his professional duties, understands like nobody else the need to support journalists who risk facing criminal prosecution in Estonia.

"When a reporter comes under pressure from authorities, it does not matter in what form it happens, whether it is the threat of arrest or arrest itself. However, it is this pressure that allows you to pull yourself together, concentrate and realize what you are doing and why. Our Estonian colleagues and everyone else perfectly understand why they [Sputnik Estonia] are under pressure, and therefore support is especially important for them", Vyshinsky said, as quoted by the press service.

At the same time, the journalist added that he would like to bring some humour to the tragic situation.

So, while launching the photo trend under the hashtag #СпутникСила (Sputnik strong) in a video clip, Vyshinsky symbolically lifted a kettlebell of the Sputnik news agency's corporate orange colour and promised that the country would support Sputnik Estonia employees.

​Thus, an orange kettlebell with a caption "Got You Covered!" has become a symbol of the photo trend in support of Sputnik Estonia journalists.

​Other media managers of Rossiya Segodnya, as well as correspondents of its English, Chinese and Spanish newswires, have followed suit, sharing their photos with an orange kettlebell and words of support.

​On 18 December, Rossiya Segodnya said that employees of Sputnik Estonia had received letters from the Baltic country’s Police and Border Guard Board that warned they would face criminal prosecution unless they severed their ties with the Moscow-based parent news agency by 1 January. The Estonian authorities cited the 2014 EU sanctions as a pretext for possible legal action. Notably, Rossiya Segodnya insisted that it was not mentioned in any EU sanctions lists.

Against this backdrop, the editor-in-chief of Rossiya Segodnya and the RT broadcaster, Margarita Simonyan, has urged Estonian President Kersti Kaljulaid to prevent the journalists from being arrested.