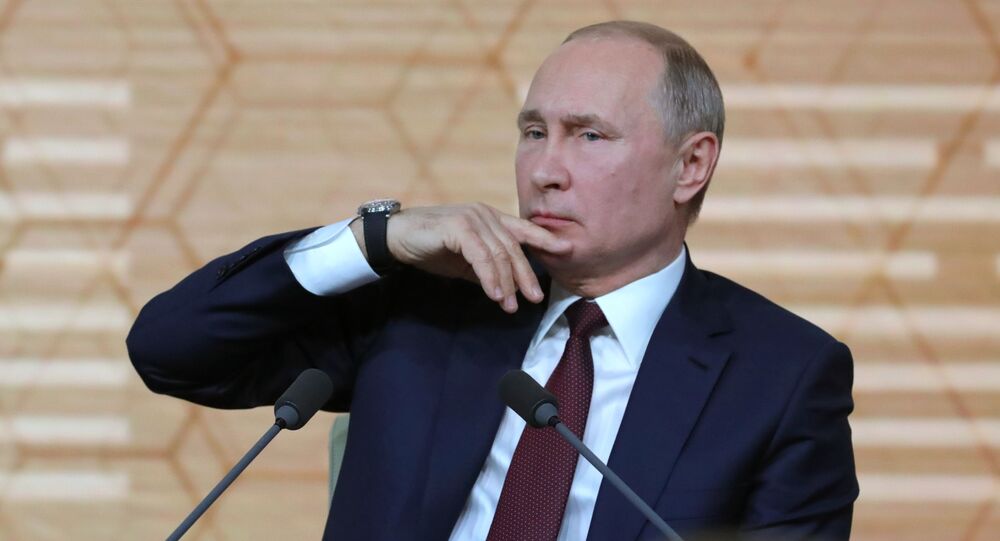 A record 1,895 journalists from around the world gathered at Moscow’s World Trade Centre on Thursday in the hope of asking the Russian president about the hot button issues of the day.

Russian President Vladimir Putin fielded dozens of questions at today’s press conference, with the event lasting nearly four and a half hours and being the 15th event of its kind since his very first year-end presser in 2001. This year’s event was filled with a wide range of questions ranging from demographics, pensions, medicine, Russia’s bureaucracy, ecology and a variety of regional problems, with a sprinkling of jokes included for good measure. But it was the international agenda which garnered the most attention from the press’s foreign contingent, with Putin asked questions on issues ranging from the US House of Representatives’ recent vote to impeach President Donald Trump to Boris Johnson’s election as the UK’s prime minister, and much more.

At the top of the agenda was international security. Speaking to reporters, Putin confirmed that he has yet to receive any reaction from the US regarding Russian proposals to renew the New Strategic Arms Reduction Treaty (New START) of 2011. With the US withdrawal from the Anti-Ballistic Missile Treaty in 2002, and from the Intermediate-Range Nuclear Forces Treaty earlier this year, New START is now the last major arms treaty between the two nuclear superpowers.

“We are prepared to extend the New START treaty tomorrow, if necessary,” Putin said. “But so far our proposals have yet to receive a response. If there is no New START, there will be nothing in the world to hold back an arms race,” he warned.

Asked to comment on the US House of Representatives’ move Wednesday to impeach President Trump over his alleged attempt to get dirt on the Biden family’s alleged illegal activities in Ukraine, Putin called the news just a “continuation” of the long-term infighting between the Democrats and the Republicans which began after Trump’s election in 2016.

“I am not sure about this. [The process] still needs to go through the Senate, where the Republicans constitute a majority, as far as I am aware…It is just a continuation of the domestic political struggle, and a party that lost the election strives to achieve results through other means,” Putin said, referring to the Democrats, who initiated the impeachment proceedings.

“First, by accusing Trump of conspiracy with Russia, then it turns out that there was no conspiracy and now the pressure is on Ukraine,” he added.

Two-thirds support in the Senate, where the Republicans enjoy a 53 seat majority in the body of 100 legislators, would be required to impeach President Trump, making successful impeachment virtually impossible, according to many observers.

Putin was asked to comment on the West’s ongoing sanctions pressure against Russia, its impact, and whether there was any hope of sanctions being lifted in the near future. The US and its European allies introduced sanctions against Russia in 2014 over the Ukrainian crisis, and have renewed and expanded them ever since.

“We have repeatedly discussed this subject. There are varying but generally similar estimates regarding the consequences for all the participants of this unpleasant process…Therefore it’s better, of course, to get rid of politically motivated restrictions in the field of economic activity. They cause enormous damage to world trade and the global economy,” Putin said.

At the same time, the president pointed out that for Russia, in addition to the negatives, there were positives as well – for example in the development of Russia’s agricultural sector, and efforts at import substitution, in industries such as engines for helicopters and the defence sector.

“Russia’s economy has adapted to foreign shocks. The ruble has become more resilient to fluctuations in oil prices,” Putin noted.

The president also touched on the recent move by the executive committee of the World Anti-Doping Agency (WADA) to ban Russian athletes from participating in Olympic sporting events over the next four years over alleged violations of anti-doping rules by individual athletes.

Putin suggested that WADA’s decision was unfair, and “does not correspond to common sense and law…If someone is caught doing something, then it is normal and fair to punish them. But if most of our athletes are clean, how can [WADA] sanction them for others’ actions?”

“A country’s team should not compete under a neutral flag if there are no factual claims against the current Olympic Committee,” Putin stressed, suggesting that WADA’s decision goes against the spirit of the Olympic Charter.

© REUTERS / AGENCJA GAZETA
A man walks at the World Anti-Doping Agency (WADA) venue on the eve of the Fifth World Conference on Doping in Sport in Katowice, Poland, November 4, 2019.

Putin was also asked to comment on the recent elections in the UK, and how he felt about the prospects of dealing with Prime Minister Boris Johnson, given the latter’s occasional tendency to make less than flattering remarks about him.

“Whatever someone says [about me], I know for certain what Russia needs and what its interests are,” he said.

© AFP 2021 / OLI SCARFF
Britain's Prime Minister and Conservative leader Boris Johnson (C) reacts as the results are read out for the race to be MP for Uxbridge and Ruislip South at the count centre in Uxbridge, west London, on December 13, 2019 after votes were counted as part of the UK general election.

Commenting on the long-smouldering political conflict in Ukraine, which began in 2014 in the aftermath of a foreign-backed coup d’état in Kiev, Putin urged Ukraine’s current leaders to engage in direct talks with the country’s pro-independence Donbass militia if they hope for the conflict to be resolved. He added that he has seen positive movement toward a Ukrainian settlement, including Kiev’s decision to extend the Donbass republics special status. He added however that the Ukrainian government’s continued unwillingness to remove troops from the front lines is a mistake.

The Russian president also touched on the gas transit conflict between Ukraine and Russia, promising Russia would continue pumping gas through the Ukrainian pipeline network and was interested in keeping the route open. “Russia will search for a decision on gas that is acceptable to everyone, including Ukraine,” Putin stressed.

© Photo : Victor Korniyenko
Map of Ukraine's immense gas transit network, most of it built during the Soviet period and in need of modernization.

Regarding the ongoing civil war in Libya, Putin confirmed that Russia was keeping in touch with both of that war-torn country’s competing forces, including the Libyan National Army and its leader Field Marshal Khalifa Haftar, and Fayez al-Sarraj and the Government of National Accord.

“Russia is in contact with both al-Sarraj and Haftar,” Putin said, adding “you know who brought Libya to its state of chaos and collapse,” referring to the 2011 NATO intervention which helped topple the government of long-time Libyan leader of Muammar Gaddafi.

“In Libya today it’s difficult to determine who’s right and who’s to blame. The right thing to do is to find a solution which will stop the hostilities," Putin said.

© AFP 2021 / MAHMUD TURKIA
A fighter loyal to the internationally recognised Libyan Government of National Accord (GNA) fires a truck-mounted gun during clashes with forces loyal to strongman Khalifa Haftar in the capital Tripoli's suburb of Ain Zara, on September 7, 2019.

Putin was also asked to comment on the situation relating to the employees of Sputnik Estonia, who received letters from the country’s police and border guard service earlier this week warning them that they may face criminal prosecution unless they stop their work for the agency by January 1.

According to the Russian president, he was surprised by the events in Estonia. He pointed out that the West hypocritically accuses Russia of ‘clamping down’ on its media, while all the while European countries themselves are doing so.

Putin called Estonian authorities’ efforts an astonishing display of cynicism, and suggested that the authorities were “afraid” of the Sputnik journalists’ work.

“You do a great deal, and the attempts to interfere with your work by the country’s authorities must not go unnoticed…It’s important to seek the opportunity for journalists to work in those countries that are afraid of your information, of your influence,” Putin said.

Vladimir Putin: US Senate Unlikely to Remove Trump From Office