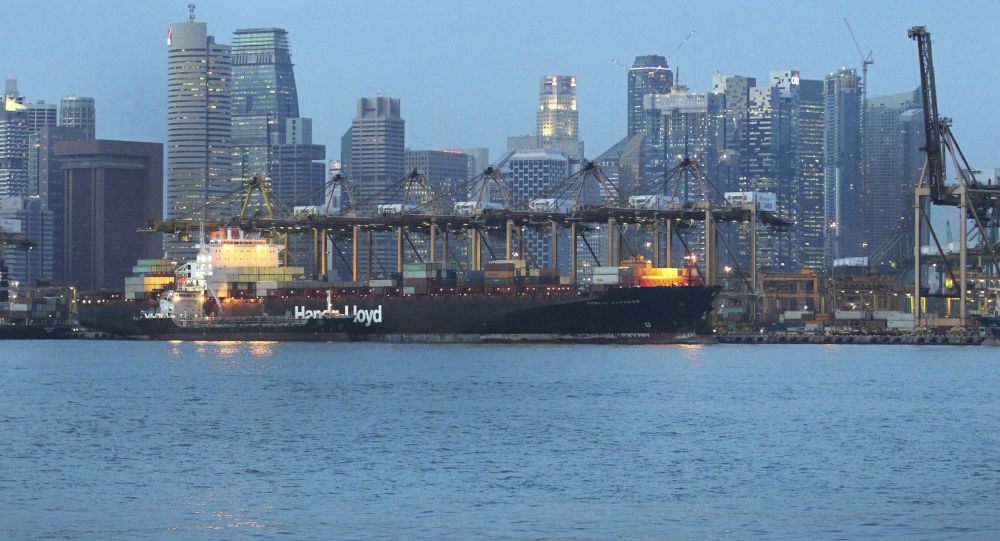 VLADIVOSTOK (Sputnik) - The authorities of the Port of Singapore have seized Russian ship the Sevastopol with 12 Russian crewmen for debts allegedly caused by US sanctions and want to obtain court permission to sell it, the deputy general director of the ship’s owner Gudzon, Oleg Anikin, said earlier in the day.

The situation in Singapore with the Russian ship Sevastopol is a purely commercial dispute that has nothing to do with politics, spokesman for the Russian Embassy in Singapore Sergei Novoseltsev stated.

“The vessel was arrested because of debts, not because of sanctions”, the diplomat said, stressing that the situation is complicated, but not related to politics.

The representative of the Russian diplomatic mission confirmed that the crew of Sevastopol consists of 12 Russian citizens.

In the meantime, the Singaporean Embassy in Moscow stated that the ship’s arrest on 22 October is not related to the earlier seizure of its shipment of firearms on 22 March.

"The notify party for this shipment was from Sudan, where an arms embargo is in effect under the provisions of the relevant United Nations Security Council Resolutions. The reported final destination of the shipment was Djibouti, and that the shipment would first tranship at Sudan. However, checks with the Djibouti Government revealed that the documentation was fraudulent", the embassy said.

Prior to this, the deputy general director of the ship's owner Gudzon, Oleg Anikin, claimed that the ship was arrested due to US sanctions.

"When the ship came to Singapore, our auxiliary engines broke down. We contacted Singapore repair companies. But since the ship is under sanctions, 80 percent of companies refuse to repair it, and those who agree put an unbearable price tag. We tried to bring repairmen from Russia, but the Singapore authorities they did not let them aboard under various pretexts. As a result, a debt formed for the ship’s parking and the authorities seized the ship", Anikin said, without specifying the amount of the debt.

The ship now cannot leave the port, and the company can't buy fuel, he claimed.

"The crew have provisions, electricity too. The port authorities said that they would take the ship under control and would not let anyone on board or release it. The court is scheduled for December 17. Singapore hopes the court will give it the ship, and then US sanctions will be lifted and it can be sold", Anikin added.

He also noted that the company had approached the Russian consulate and was in contact with diplomats.

In August 2018, the United States added two Russian companies, including Gudzon, and six vessels, including the Sevastopol, to the list of sanctions related to North Korea.

CORRECTION: This article was updated as the Singapore Embassy in Moscow issued a statement stressing that the Sevastopol vessel was "arrested by the Sheriff of the High Court of Singapore" on 22 October, adding, that "the arrest arose from Admiralty Court proceedings, which were initiated by a private party and not the Singapore Government".