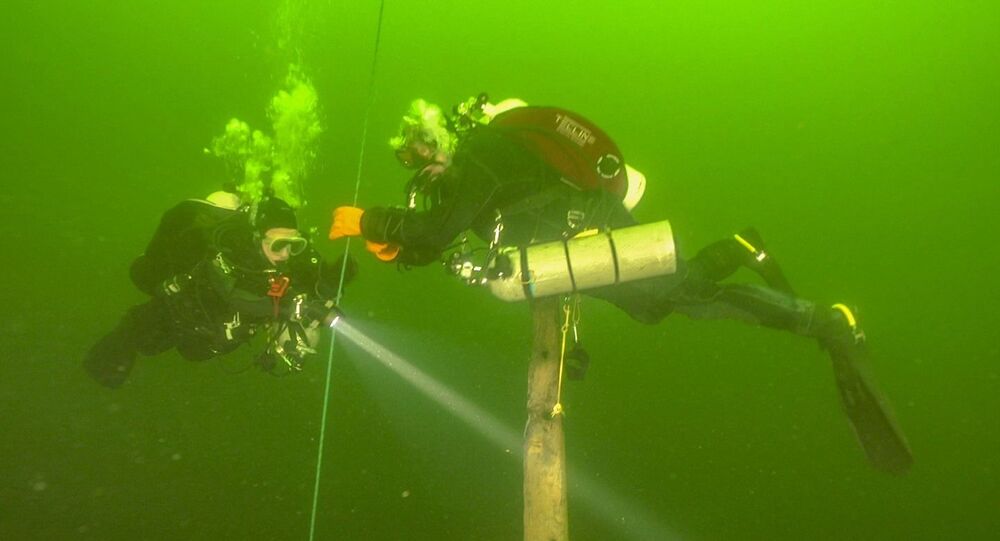 Icebreaker, Warships, a Submarine: What Else Rests at the Bottom of the Baltic Sea?

The Baltic Sea is rich not only in underwater amber deposits, its blue depths hide other treasures. Kaliningrad wreck divers know this like no one else.

Red Ship König team member and wreck diver Timur Akhmedzyanov, in an interview with Sputnik, explained that a large number of wrecks have remained at the bottom of the Baltic Sea since the First and Second World War.

“Most of the discoveries were made in the areas of Cape Taran and Baltiyskaya Kosa (Baltiysk Spit). Mostly, these are the ships that were destroyed during the assault on Königsberg and Pillau (the town's name was changed to Baltiysk in 1946 – ed. note Sputnik). Among the most visited by wreck diving enthusiasts are four warships, two of which are German. However, perhaps the most famous local wreck is the Drache, a German warship. It’s practically undamaged, it still has anchors, guns preserved, for example, gun aiming mechanisms still function, you can spin them”, Timur Akhmedzyanov said.

According to him, many other objects rest on the Baltic's bottom, and not all have been studied yet:

“For example, there lies a submarine, to which we managed to dive only once. The object is located at a technical depth of 65 metres – it requires wreck diving special equipment and training. Not far from the shore, an icebreaker stands on an even keel, that is, it lies horizontally at the seabed, a large beautiful ship, but, unfortunately, it is quickly falling apart”, he told Sputnik.

Wreck divers also stumble upon target ships deliberately sunk during naval exercises - these were dismantled ships used by the military for firing practice.

“In the area of Cape Taran, you can see a beautiful vessel, which was most likely a fishing boat. It stands on an even keel with all the windlasses and anchors removed from it. You can see the ship was deliberately prepared for flooding”, Timur Akhmedzyanov said.

To find a shipwreck is quite difficult and in itself is considered sheer luck. If last year Kaliningrad wreck divers failed to find any such object, then this year they were lucky to discover four at once. “Among the three new shipwrecks that we found this summer was a relatively modern barge, and, more surprisingly, a completely wooden vessel, presumably built before 1900. It has no metal parts at all. Nothing is written on its broadsides. If we can identify it, that would be a great success,” the Red Ship König team assured.

Not Only to Discover but Find Information on the Ship

Wreck divers try to be interested in the history of the objects they find. As Sputnik’s interlocutor noted, if you have information about a sunken ship, you can better navigate underwater having a picture of what was where.

“For example, when a few years ago we discovered a keel-laying plate from one of the found heavily damaged wooden ships, we contacted the German archives. We managed to find out by the shipyard’s name and number that it was the merchant ship Velox, built in 1883, which was destroyed by a mine in 1913. Furthermore, we could even find its picture. But this is still a unique case!” Timur Akhmedzyanov said.

He also emphasised that it’s not so easy discovering various kinds of “identification marks” on a ship to identify it: “The sea is ever-changing: it sometimes covers the object up with sand, then opens it up when you least expect it. The waves carry the ship’s remnants: they are light, and get mixed all the time. On top of that, visibility in the Baltic Sea does not always allow for a good view of the submerged object”.

According to Timur Akhmedzyanov, the above-mentioned findings in the Kaliningrad region are far from everything the Baltic Sea has to offer. However, in order to regularly discover new wrecks, “informants” are needed, not just special resources and equipment,.

“In Poland, probably, 100 times more wrecks were discovered. After all, Pillau was a military city, sea routes passed through there, which means there should be a lot of objects nearby, and not all of them have been discovered at the moment. The military does not provide such information. Only fishermen, if they manage to notice something, share information with us”, the wreck diver explained.

In turn, Kaliningrad wreck divers transfer data on discoveries in the Baltic to the Museum of the World Ocean. Often, thanks to this cooperation, it makes it possible to add to the museum’s collection:

“From one of the discovered vessels, our team picked up a wooden frame and handed it to the museum, where it was mothballed to prevent destruction. Otherwise, everything rots away and turns into dust. The museum will examine all of it and can find out the age of the vessel. And then the object will become one of the exhibits”, Akhmedzyanov told Sputnik.

No Treasures and Skeletons so Far

Although the first thing that comes to mind for those asking about diving to the sunken ships in the Baltic is probably treasure, however, wreck divers themselves have yet to find.

“There were no gold chests yet. Do not forget, everything is different at the depth: under the influence of water, storms, everything breaks down, it is extremely difficult to find preserved valuable artefacts,” Timur Akhmedzyanov explained.

He added that local wreck divers also did not come across skeletons or separate bones: “We have seen laced shoes. Most likely, if the body was there, then it was either eaten by fish, or something else happened. In any case, we try not to touch such things. Firstly, it’s unpleasant, and secondly – why bother?” According to him, boat owners who have lost motors or anchors often turn to wreck divers for help to search for them at the depth.

Do Not Dive Without Body, Do Not go Inside the Ship

Timur Akhmedzyanov does not deny that wreck diving is directly related to risks. First of all, the water in the Baltic is quite cold, on average 15° (in the cold season the temperature drops to 2°), and secondly, the sea is unpredictable. During the dive and at the seabed everything can look calm but at the top, there could be a storm rising. Thirdly, old structures can collapse underwater at any time. According to him, storms greatly change the appearance of an object: decks break down; huge sheets of structures are thrown like pillows:

“You need to be very careful and follow certain rules. You cannot go inside the ship: you may get in and not get out of there. You should have a minimum of hanging objects – sometimes people dive with flashlights, cameras. Instead, everything should be picked up and folded so that you never catch on anything. Apart from that, a body is mandatory”.

According to Sputnik's interlocutor, to get better (for example, to cure decompression, or decompression sickness that occurs in case of unsuccessful dives), wreck divers can use pressure chambers – the Kaliningrad military has them.

“Fortunately, we have not yet requested their help and try not to go to technical depths. Firstly, it is dangerous, secondly, as I said, it is necessary to have special technical equipment, and thirdly, we have a lot to see at recreational depths – up to 40 meters. By the way, that’s why our deep wrecks are not fully studied: they rest at depths of 60, 70, 80 meters. You need to prepare very well to dive there”, Timur Akhmedzyanov said.