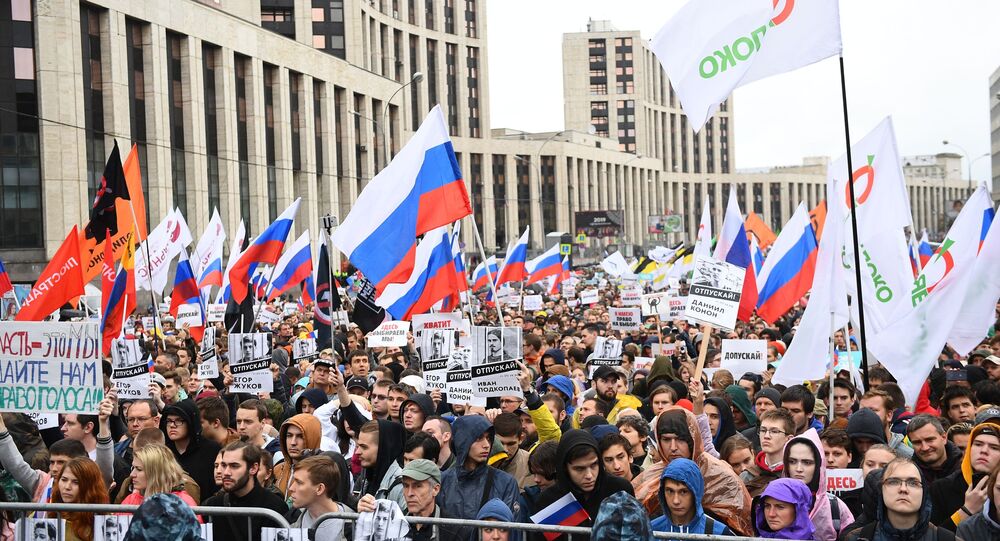 MOSCOW (Sputnik) - Members of the Moscow city parliament from the Communist Party of the Russian Federation plan to prepare a bill by late October to soften the punishment for violations at public rallies, lawmaker Leonid Zyuganov told Sputnik.

"It is still at the stage of an initiative and is being developed. My colleagues and I sat down and considered the idea, and now we need to work it out. But we are preparing a bill, and I believe that it will be ready by late October", Zyuganov said.

According to the lawmaker, the bill will be debated by the city's parliament in two to four months at the earliest.

Meanwhile, Actor Pavel Ustinov was sentenced to 3.5 years in prison for dislocating a police officer's shoulder when he was arrested during a rally that took place in August. He denied the charges and said he had not even taken part in the protest.

A number of prominent Russian artists, public figures and politicians interceded on his behalf. Earlier on Thursday, prosecutors asked the Moscow City Court to release Ustinov until an appeal hearing.

Unauthorised rallies began in the Russian capital in mid-July after the election commission barred several opposition candidates from the September race for city parliament. The requirements for registration in the race called for each prospective candidate to collect a certain number of voter signatures, and the would-be candidates were denied the opportunity to register based on a large proportion of invalid signatures, as cited by the commission.

During three unauthorised rallies, at least 1,700 people were detained. Some of them were detained under articles on mass riots and the use of violence against law enforcement officials and several have received prison sentences. Criminal charges against five participants of the rallies have since been dropped, with some of the others released under house arrest.

In particular, on Tuesday, a Moscow court sent back to prosecutors the case of programmer Aidar Gubaidullin, who is accused of having thrown a plastic bottle at a policeman at an unauthoriszed rally in July. Gubaidullin was released under the condition that he would not leave the country.

Moscow Court Sentences Participant in Unauthorised Rally to 3.5 Years for Violence Against Police