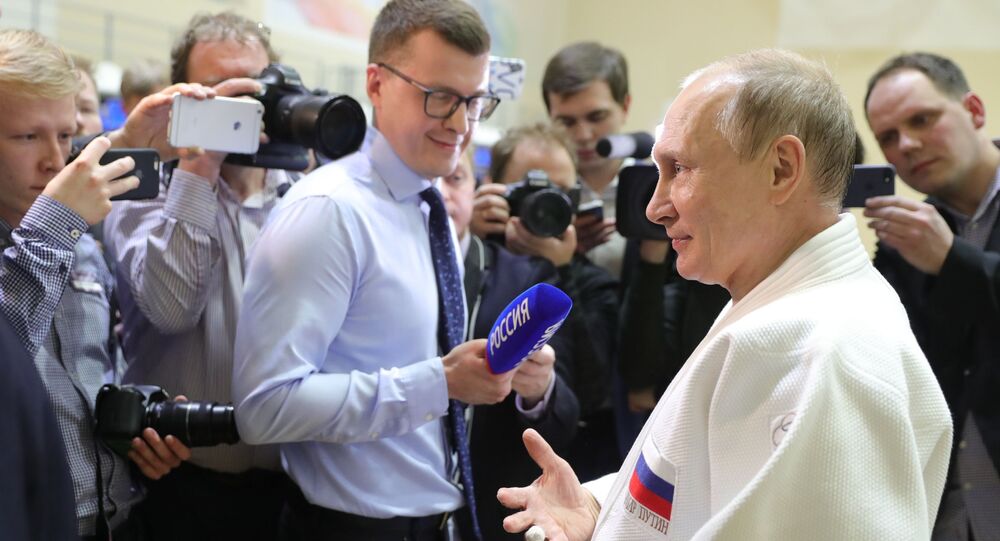 The Russian president has been training in martial arts since childhood and continues to do so, keeping himself in top shape. He holds high-level titles in several martial arts, including judo and sambo, and even released his own video guide about the basics of judo.

Judo is more than just a sport; it is a means for a person to enhance oneself, as well as to boost understanding with some world leaders, according to Russian President Vladimir Putin. In an interview with Mongolian newspaper Udriin Sonin, Putin said that he and Mongolian President Khaltmaagiin Battulga have quickly found common ground due to both being active judo practitioners.

"Battulga practices both judo and sambo, and is a globally acclaimed martial arts master. Common interests and a common way of thinking helped us to quickly [...], as they say, get on the same wavelength. It helps us sustain effective dialogue, resolve bilateral issues in a constructive way and achieve greater success in implementing promising projects", he said.

The Russian president further noted that judo improves a person's life in general, developing one's "willpower, respect for others, fortitude, ability to take a hit and emerge from any difficulties while retaining dignity".

Vladimir Putin, a known fan of martial arts, has been practicing judo since he was 11 years old and hasn't stopped since, achieving an 8th dan black belt in the sport. He also holds 8th dan in Kyokushin karate and a 9th dan in taekwondo, while Battulga has practiced judo and achieved the status of world champion in sambo in 1983. Japanese Prime Minister Shinzo Abe even once suggested holding a sparring session between the two presidents in Japan.

A shared love of martial arts has helped the Russian president find common ground not only with foreign colleagues, but also with journalists in the past. During a June 2019 conference with foreign media representatives, Bloomberg's Executive Editor Rosalind Mathieson said that despite extensive training in Muay Thai, she wouldn't dare challenge Putin on the tatami. The Russian president noted that it would be an unfair fight since he would have a solid advantage over Mathieson.