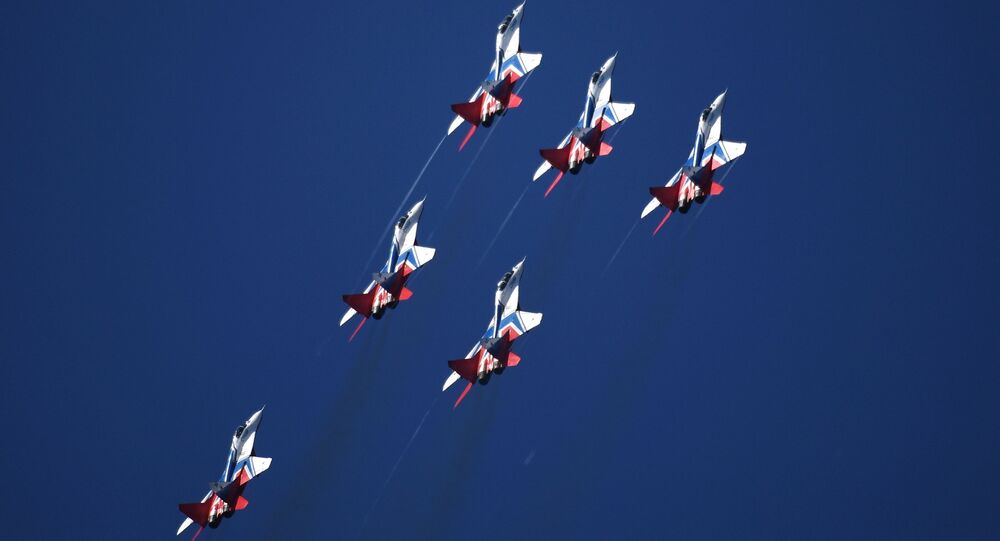 This biennial event is among the world's largest of its kind. Russian and foreign aviation experts, manufacturers and businessmen gathered to attend exhibitions, roundtables and conferences featuring the latest achievements and novelties in the aviation sphere.

The MAKS International Aviation and Space Salon near Moscow, Russia, is one of the biggest air shows of its kind in the world. The event was visited by Turkish President Recep Tayyip Erdogan, who was accompanied by Russian President Vladimir Putin, and featured multiple debuts of passenger and military aircraft.

The 2019 MAKS Air Show concludes in the Moscow region on 1 September; here are the most memorable moments of this year's event.

One of the show’s highlights was the medium-range airliner MS-21. This aircraft, which made its first flight back in 2017, was presented to the public for the first time. During its demonstration flight and despite its large bulk, the pilots were not afraid to show off all the plane’s capabilities: almost placing the aircraft on its side before engaging a steep vertical climb.

Interestingly, some US companies who had initially taken part in the MS-21 project later dropped out and refused to supply the materials necessary for the production of a composite wing. But at short notice, some Russian companies were able to step in and were able to provide a worthy replacement.

Turkey recently acquired Russian S-400 anti-aircraft missile systems, to which the US responded by threatening to cancel the planned delivery of its F-35 fighters to Ankara, despite Turkey having earmarked billions for the US warplane's development. The Turkish leader said at the time that he would find a worthy replacement, and may have taken steps to do so over the past week: he confirmed his interest in buying the Su-35 and Su-57 instead of the F-35.

For the first in the history of MAKS, China has partnered with Russia in Zhukovsky. Show attendees were treated to a full-scale layout of the cabin of the CR929, a promising Russian-Chinese long-range aircraft which attracted a lot of attention. Russia and China plan to have the plane in production by 2025-2027, creating an airliner with jets capable of holding 250-300 passengers that can compete with industry leaders Airbus and Boeing. The United Aircraft Corporation and the Chinese aerospace company COMAC are working on a CR929 aircraft project.

According to the head of the Chinese delegation, Minister of Industry and Information Technology Miao Wei, the tie-up with Russia is strategic and will benefit both countries.

One of the main foreign stars of the air show, was, of course, Airbus. The French company showed off its new A350-900, which features a so-called “smart cabin” experience.

This modification is based on the so-called “Internet of things”, which provides a link between the main elements of the cabin: armchairs, food carts, kitchens, entertainment and lighting system. The system simplifies the interaction between passengers and cabin crew, allowing for a more comfortable flight. Airbus says that the system, known as the Airspace Connected Experience, will be available in all of its planes in the near future.

In an exclusive interview with Sputnik International, Airbus Russia CEO Julien Franyatt said: “We are extremely proud of the A350-900. We are bringing the Internet of things into the cabin. This is the first time we are actually fitting this in the real airplane and we are showcasing it. So that’s why we are extremely proud to be at MAKS as well. We come with something that nobody has seen in an aircraft”.

Mr. Franyatt described the features of the interior of the new aircraft in detail: “When you first board the aircraft, you have two main elements that are welcoming you. The first is that one big screen where you can post messages and make them personalised. This is something that you can change on the flight throughout the flight, depending on the destination. The second thing is that you see... videos and images [projected] across the cabin. That is something that would really change the way people are flying.”

In recent years, Airbus has outpaced Boeing in terms of its number of orders, including at the Le Bourget show in France in June. At MAKS - 2019, Airbus also concluded contracts with Russian airlines, the details of which have yet to be made public.

Сomparing the air show in Paris to the show in Zhukovsky, Franyatt noted their difference in spirit: “MAKS-2019 has a very different DNA. It is a bit less commercial. It has different flavour. It is more [oriented] towards giving the opportunity to Western companies to demonstrate what their intent to Russia is.” He also stressed that “there is a big part of Russia in the A350-900 airplane. Resource components are manufactured in Russia. And our engineering centre in Russia has heavily contributed to the cooperation”.

Following a successful tour through China, Japan, and the Asia Pacific region, Embraer’s latest [aircraft], the E195-E2, made its Russian debut at MAKS-2019.

The new Brazilian aircraft not only looks solid, but also can please customers with its internal amenities. The layout of the seats in the aircraft is a 2-2 configuration, and the seats of the Business class are arranged in the form of a "Christmas tree", creating a convenient passage for passengers to their seats.

Large portholes create more natural light in the cabin, and the work of the auxiliary power unit is almost inaudible.

Speaking in advance of the Moscow event, Martyn Holmes, Vice President for Europe, Russia, and Central Asia of Embraer Commercial Aviation, said “This jet is a real game changer, and MAKS-2019 offers a superb opportunity to showcase this special aircraft to our customers in Russia and the surrounding region.”

Holmes continued, “The E195-E2 is the largest of the three aircraft in the E-Jets E2 family, accommodating between 120 and 146 passengers, depending on configuration. Therefore, covering a different market segment for aircraft that offer fewer than 120 seats. Operators such as Air Astana love their E2s as they provide unrivalled economics and efficiency, superior operational flexibility, reliability and unsurpassed passenger comfort. As the most efficient single-aisle jet on the market, the E195-E2 is the ideal aircraft for establishing and growing regional hubs, and complement existing low-cost and mainline fleets. Such are the economics of this aircraft; it has become known as the ‘Profit Hunter’ and we are already seeing significant interest from operators in the region.”

Aviation Clusters as an important format of international cooperation

In addition to new products in the aircraft industry, interesting conferences and discussions such as “Aviation Clusters of Russia and Europe”, were held at the air show. Sputnik talked about the role of aviation clusters with Kris Van der Plas, managing director of The Flemish Aerospace Group, a cluster organisation for companies active in the aerospace market.

Van der Plas explained the importance of attending such exhibitions as MAKS: “Our cluster includes research institutes. We have good contacts with TSAGI (Central Aerohydrodynamic Institute) and the main focus of our companies is building technology together with our international partners. We have a longstanding agreement with TSAGI. They also have an office in Brussels, we are located in Brussels so that helps.”

“We’ve been attending MAKS for many years because it is one of the target markets for several of our countries. The last couple were not so easy, but I continued to attend this year, especially to make sure that we keep on having those contacts. Several of our companies already supply Russian manufacturers. We already supply the Sukhoi 1000 SJ for example. That’s why we continue to come to Russia,” he added.

Drones – the future of aviation

Much attention was paid to unmanned aviation with Russia, China and Iran all showing off their drones.

Several conferences were held on unmanned aircraft and space vehicls. Sputnik discussed the future of unmanned aircraft with Sergey Zhukov, a test cosmonaut, president of the Moscow Space Club, and co-leader of the Aeronet working group of the National Technology Initiative.

“I believe that the development of unmanned aircraft is moving towards creating heavier machines, vertical take-off and landing, more electric cars with new aerodynamic qualities and those that have good autopilots. This will allow to replace and fill the lack of pilots and create transport lines. A great influence will be exerted by machinery in agriculture. Unmanned aerial vehicles and unmanned ground equipment, which is engaged in chemical work - for them, the drone will give exact coordinates,” said Zhukov.

“The appearance of aerospace systems is possible. The creation of information fields should also be consistent — these are satellite communications and Internet groups. Smart car, neural networks. Associated with this are new manufacturing technologies, topological optimization, which allows you to create lighter materials. The flow of technology from various industries, from the nuclear industry, aviation, astronautics, automotive technology. This is the future,” Zhukov added.