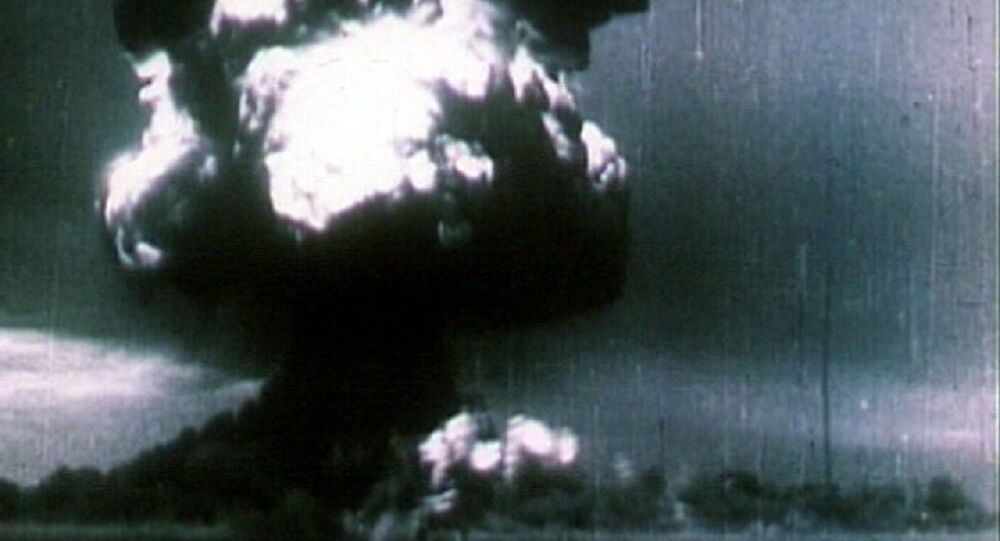 MOSCOW (Sputnik) - On Thursday, the world marks 70 years since the test of the first Soviet nuclear bomb at the Semipalatinsk test site.

This historic event was the culmination of long and difficult work. Soviet physics started working on nuclear fission in the 1920s. Since the 1930s, nuclear physics became one of the main directions of Russian physical science, and, in October 1940, for the first time in the Soviet Union, a group of scientists came forward with a proposal to use atomic energy for weapons purposes, submitting a request to the Red Army’s department for inventions "about using uranium as an explosive and toxic agent."

The war that broke out in June 1941 and the evacuation of scientific institutes, which dealt with the problems of nuclear physics, interrupted the work on atomic weapons in the country. But in the fall of 1941, the obtained intelligence information revealed that the United Kingdom and the United States carried out intensive scientific research seeking to develop methods for using atomic energy for military purposes and to produce explosives of enormously destructive power.

This information forced the Soviet Union to resume work on uranium. On 28 September 1942, Soviet leader Joseph Stalin approved the resolution of the State Defence Committee on the organisation of work on uranium, according to which the research on the use of atomic energy was resumed.

In October 1942, Igor Kurchatov, a professor of the Leningrad Institute of Physics and Technology (now Ioffe Physical-Technical Institute of the Russian Academy of Sciences) got involved in the work, and in February 1943, the State Defense Committee issued a new order, by which Kurchatov was appointed the supervisor of the chain reaction of uranium fission (the "uranium problem"). Kurchatov headed the newly established Laboratory No. 2 of the USSR Academy of Sciences, which started studying atomic energy. The laboratory later grew up to be the Kurchatov Institute of Atomic Energy.

Initially, overall direction and oversight for the atomic problem were carried out by the deputy chairman of the State Defence Committee, Vyacheslav Molotov. But on 20 August 1945, a few days after the United States detonated two nuclear weapons over Japanese cities, the State Defense Committee decided to create a Special Committee, headed by Lavrentiy Beria. He became the head of the Soviet atomic project.

At about the same time, the First Main Department within the Council of People’s Commissars of the USSR (later the Ministry of Medium Machine-Building Industry of the USSR and now the State Nuclear Energy Corporation Rosatom), subordinate to the Special Committee, was established.

In April 1946, Laboratory No. 2 created the Design Bureau No. 11 (KB-11, currently the Russian Federal Nuclear Center - All-Russian Scientific Research Institute of Experimental Physics), one of the most secret enterprises for developing domestic nuclear weapons. Professor Yulii Khariton was appointed the bureau’s chief designer.

Plant N 550 of the People’s Commissariat of Armament, which produced bodies of artillery shells, was chosen as the base for the deployment of KB-11. The top-secret facility was located 80 kilometres (almost 50 miles) from the city of Arzamas on the territory of the former Sarov Monastery.

KB-11 was tasked with creating two versions of an atomic bomb. Plutonium should have been the working substance in one of them, and uranium-235 in the other one. In mid-1948, the work on the uranium version was halted due to its relatively low efficiency compared to the cost of nuclear materials.

The official name of the first Soviet atomic bomb was RDS-1. According to the decree of the Council of Ministers of the USSR of June 21, 1946, these initials stood for "special jet engine."

Creation of the bomb

The creation of RDS-1 was carried out taking into account the available materials according to the scheme of the US plutonium bomb, tested in 1945. These materials were provided by Soviet foreign intelligence. Klaus Fuchs, a German physicist who participated in work on nuclear programs in the United States and the United Kingdom, was an important source of information. Intelligence finds on the US plutonium charge for the atomic bomb helped to reduce the time needed for the creation of the Soviet charge, although many technical solutions of the US prototype were not the best.

Even at the initial stages, Soviet specialists could offer the best solutions to both the charge and its parts. Therefore, the first charge tested by the Soviet Union was more primitive and less effective than its original version proposed by Soviet scientists in early 1949. In the first test, for safety reasons and in order to show in a short time that the Soviet Union also had atomic weapons, it was decided to use the charge that was created according to the US scheme.

The charge for RDS-1 was made in the form of a multilayer structure, in which the transfer of the active substance, plutonium, into a critical state was implemented through its compression by means of the converging spherical detonation wave in the explosive.

RDS-1 consisted of a nuclear charge, an explosive device, an automatic detonation system and a ballistic hull.

Plant number 817 was built in the city of Chelyabinsk-40 to produce an atomic charge for the bomb. The plant consisted of the first Soviet industrial reactor for producing plutonium, a radiochemical plant for separating plutonium from uranium irradiated in the reactor, and a plant for producing high-purity plutonium metal.

The plant’s reactor started running at full design capacity in June 1948. The plant had the necessary amount of plutonium to produce the first charge for an atomic bomb a year later.

A test site for testing the charge was built to the west of Semipalatinsk. The site was a plain of about 20 kilometres in diameter surrounded by low mountains from the south, west, and north.

© Sputnik / A. Solomonov
A lake in the place of a surface nuclear explosion on the Semipalatinsk proving ground

The construction of the testing facility, called Training Ground No. 2, started in 1947, and was largely completed by July 1949.

An experimental site with a diameter of 10 kilometres was prepared for bomb tests. It was equipped with special facilities necessary for testing, as well as for observation and registration of physical research. Sections of subway tunnels and fragments of runways were built; samples of aircraft, tanks, artillery rocket launchers, and ships were placed at the site in order to study the effects of a nuclear explosion.

On August 5, 1949, the government commission for conducting the RDS-1 test issued a conclusion, reaffirming the full readiness of the test site and proposed to conduct detailed test assembly and detonation operations within 15 days. The tests were scheduled to take place in the last days of August, with Kurchatov being the test supervisor.

The tests were conducted from August 10 to August 26. On August 21, a plutonium charge and four neutron fuses, one of which was supposed to be used to detonate the weapon, were delivered to the test site. Kurchatov arrived at the test site on August 24, and by August 26, all preparatory work at the site was completed.

Kurchatov ordered the RDS-1 test to be carried out on August 29 at 8 a.m., but later, due to weather conditions, it was decided to detonate the bomb one hour earlier.

At exactly 7 a.m. on August 29, 1949, there was a blinding flash of light, which marked the successfully completed development and testing of the first Soviet charge for an atomic bomb.

For the successful development and testing of the charge, a large group of leading researchers, designers, and technologists were awarded medals and orders, many were awarded the title of "Stalin Prize Laureate," and developers of the nuclear charge received "Hero of Socialist Labour" titles.

As a result of the test, the Soviet Union eliminated the US nuclear monopoly on the possession of atomic weapons, becoming the world’s second nuclear power.

In the 1950s, the formation of the Soviet strategic nuclear force started as a response to the nuclear threat from the United States. The rapid development of nuclear missile weapons in the Soviet Union and the United States led to a large accumulation of nuclear weapons, so in the 1970s these countries started to take measures to reduce their nuclear arsenals.

The main component of Russia’s nuclear triad is RS-24 Yars intercontinental ballistic missiles (ICBMs) together with Topol-M missile systems. Each missile, depending on the modification, is able to carry from three to six warheads weighing 300 kilotons each. The missile’s maximum range is 12,000 kilometres.

Voevoda is capable of delivering 8.8 tons of nuclear warheads to enemy territory. The missile could carry ten half-megaton warheads up to 11,000 kilometres.

There are more than a dozen missile submarines in the combat composition of navy strategic nuclear forces. Since 2013, the Navy started to receive Borei-class submarines with the latest R-30 Bulava ICBMs, which can carry from six to ten warheads to a range of 8,000 kilometres and have a payload of 1.15 tons. Each Borei is capable of carrying up to 16 Bulavas.

The nuclear triad also includes Tu-160 and Tu-160M1 White Swan supersonic strategic bombers, and Tu-95MS Bear turboprop-powered strategic bomber. Their main weapon is Kh-555, Kh-101 cruise missiles and their version with the nuclear warhead, Kh-102. The missile has a launch weight of 2.4 tons and a range of 5,500 kilometres.

As of March 2019, according to the Arms Control Association, Russia had 524 deployed delivery systems with 1,461 warheads, as well as 760 deployed and non-deployed strategic launchers. Currently, the Russian Armed Forces are in the process of updating strategic nuclear forces.