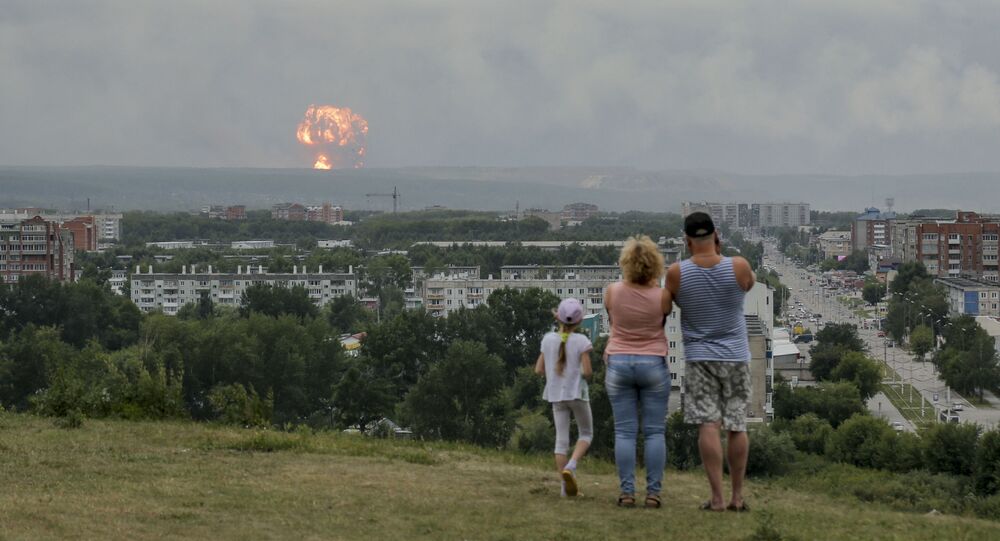 On Saturday, Russia's nuclear energy company Rosatom said that five of its employees had died in an explosion that happened during tests of a liquid-propellant rocket engine at a military site in Arkhangelsk Region on Thursday. The Russian Defence Ministry said that background radiation levels were normal following the explosion.

Al Jazeera website used a wrong picture for an article about an explosion in Russia's Arkhangelsk Region on Tuesday, calling it a "skyfall nuclear blast," while in reality, the photo showed an explosion at an ammunition depot in Russia's Krasnoyarsk Territory.

But in reality, the picture showed one of the recent explosions at a military depot near the Russian town of Achinsk.

This comes as MSNBC channel ran a show hosted by Rachel Maddow on the nuclear incident in the Arkhangelsk region in which a screenshot of an article by AP was used containing the photo of the ammunition depot blast from Achinsk.

Explosions in Achinsk initially rocked the depot on 5 August, leaving 14 people injured and one dead. On 9 August, the Russian Armed Forces’ Central Military District said that lightning had hit an ammunition rack. Nine people were injured in a blast near a railroad on the Uluy-Achinsk section in the Krasnoyarsk Territory and four of them were subsequently hospitalised, a spokesperson for the local emergency service said.

A state of emergency was declared on 9 August in Achinsk district due to the explosions.

Days later, five of Rosatom employees had died in an explosion that happened on 8 August during tests of a liquid-propellant rocket engine at a military site in the Arkhangelsk Region. The company said that the accident took place during engineering and technical works on isotope sources of the engine.