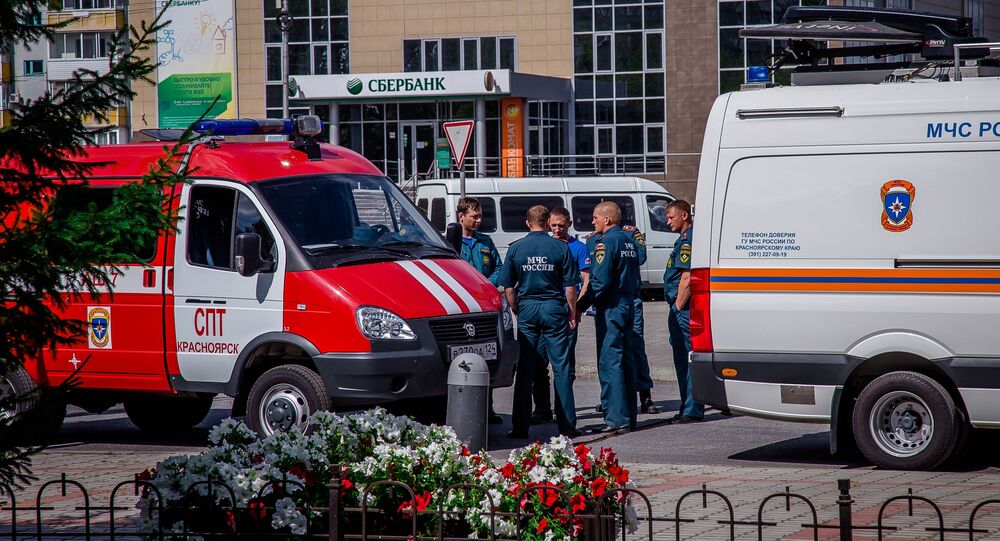 On Monday, a fire erupted at a military depot located near the Siberian city of Achinsk, which caused multiple explosions and left one killed and 13 people injured.

An estimated nine people have been injured in a new explosion at a military ammunition depot near Achinsk, in the western part of Russia's Krasnoyarsk Region, a source at the regional hospital told Sputnik.

"Eight casualties were rushed from the facility, four of whom were hospitalised. Those in hospital are in moderately stable condition. They sustained barotraumas and shrapnel wounds," the source noted.

The emergency services earlier reported five casualties in the incident.

"Five hundred meters north of the village of Kamenka, an explosion took place during the movement of a cargo train, followed by a shock wave and damage to the glass in the train [...]," they said.

Per a press release, a projectile went off during emergency relief works aimed at neutralasing the consequences of the 5 August emergency in Kamenka, near Achinsk, which led to injuries among the staffers and damage to a car.

According to the press service of the Central military command, the fire occurred due to failed lightning rods, which did not prevent a lightning from hitting the shelves with ammunition. The agency's data suggested one person from the security personnel sustained minor injuries like cuts with glass.

A representative for the Russian Railway Company RZD said trains running along the route Achinsk 2 - Nazarovo had been suspended.

According to the emergency services, if the railway is not restored, two passenger trains carrying 800 people are planned to be dispatched round the location for them to bypass the explosion site in the vicinity of the Achinsk railway in the Krasnoyarsk Region.

On Monday, a blast hit a military ammunition warehouse in Kamenka, leading to multiple projectile explosions that killed one and injured at least 13 people, according to the latest data. It took 24 hours to put off the fire. Around 16 thousand people were evacuated from the 20-kilometer zone around the explosion epicentre after an emergency situation was declared in the area, where blasts persist, witnesses say.

The depot could house over 40,000 of 142-mm and 152-mm caliber projectiles, the services shared their estimates.

At least 70 Wounded by Munitions Depot Explosions in Kazakhstan (Video)