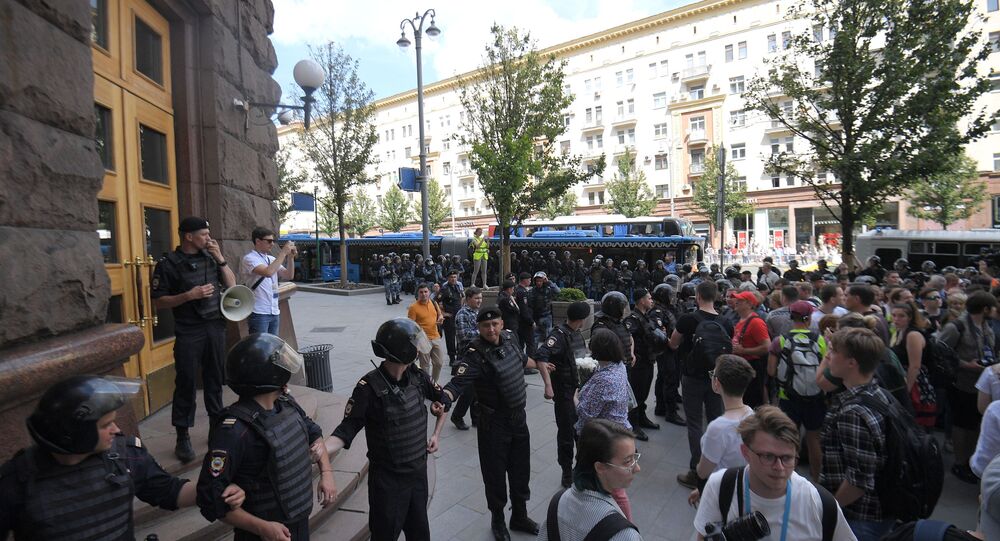 MOSCOW, (Sputnik) - Moscow district courts have authorised arrests of more than 100 people for their participation in illegal protest actions on 27 July and 3 August, the Moscow City Court said Monday.

According to the court's press service, 1,074 people were detained in the protest action on July 27. The district courts have reviewed 480 cases so far.

"Of this number, 89 cases resulted in administrative arrests; 376 people were fined, 2 were assigned mandatory work, while 13 cases have been dismissed", the press service said in a statement.

The unauthorised protest rally on 3 August involved about 1,500 people. Approximately, 600 protesters were detained. Their cases are being reviewed, according to the Moscow City Court.

"Some of the [August 3]cases have been reviewed, some are under consideration. Among those considered, for example, 30 decisions have already been issued to impose an administrative fine, and more than 20 decisions authorise administrative arrest”, the statement said.

The unauthorised rally on 27 July was organised by opposition political figures who failed to register as candidates for the upcoming city parliamentary elections. About 3,500 people attended the uncoordinated event in the centre of Moscow.

Another unauthorised rally took place on 3 August attended by some 1,500 people. About 600 people were detained for various offences.