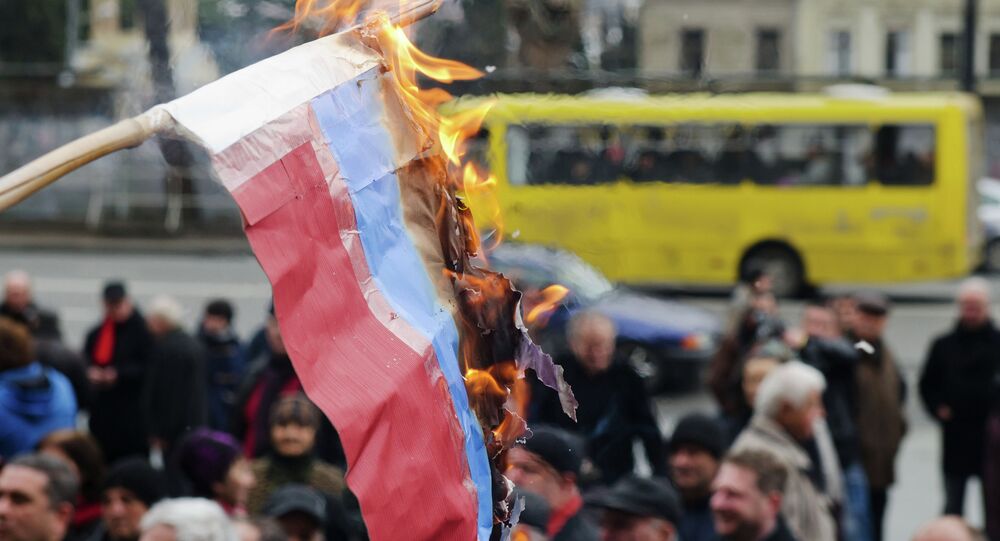 MOSCOW (Sputnik) - Moscow expects Tbilisi to realize how dangerous fanning anti-Russia hysteria may be, to ensure the safety of Russians staying in Georgia and thus enable Russia to revoke its recently introduced air travel ban, Russian Foreign Minister Sergey Lavrov said in an interview with Russia's Argumenty i Fakty newspaper.

"We expect the Georgian leadership to urgently comprehend the lameness and danger of continuing fanning the anti-Russia hysteria. All in all, it is important that the Tbilisi government has found the strength to condemn the shameful escapade of a local broadcaster, involving insults targeting Russian President [Vladimir Putin], which the Georgian society itself was outraged with", Lavrov told Argumenty i Fakty.

The Russian foreign minister expressed hope that the political situation in Georgia would be stabilized, enabling Russia to resume air traffic with the country.

"We hope that the Georgian authorities will manage to stabilize the social and political situation in the country and remove existing threats to Russians' safety. If it happens, conditions will be in place for studying the possibility for Russia to abandon its safety measures, including a ban on air travel to Georgia. We want to enjoy friendship and cooperation for the benefit of Russians and Georgians", Lavrov added.

The top diplomat was optimistic about the fate of the Russian-Georgian relations.

"I am sure that the [Georgian] people does not see Russians as enemies. Unfortunately, we note today that some politicians in the country are competing in anti-Russia rhetoric for achieving their self-serving goals. I'm sure that with time everything will come back on track and good neighborly relations between our countries will resume", Lavrov emphasized.

Violent protests erupted in Tbilisi on 20 June after a Russian lawmaker took the speaker’s seat to address an international parliamentary forum on Orthodoxy in Georgia's legislature. The unrest subsequently grew into an opposition rally, with activists demanding that the Russian delegation leave parliament and calling for the resignation of several Georgian officials.

The provocation prompted Russia to suspend direct flights to and from Georgia indefinitely, starting 8 July over security concerns.

Hours after the TV show was aired, hundreds of protesters rallied outside the Rustavi 2 building in Tbilisi, demanding Gabunia's dismissal and claiming the stunt had been orchestrated by former Georgian President Mikheil Saakashvili.