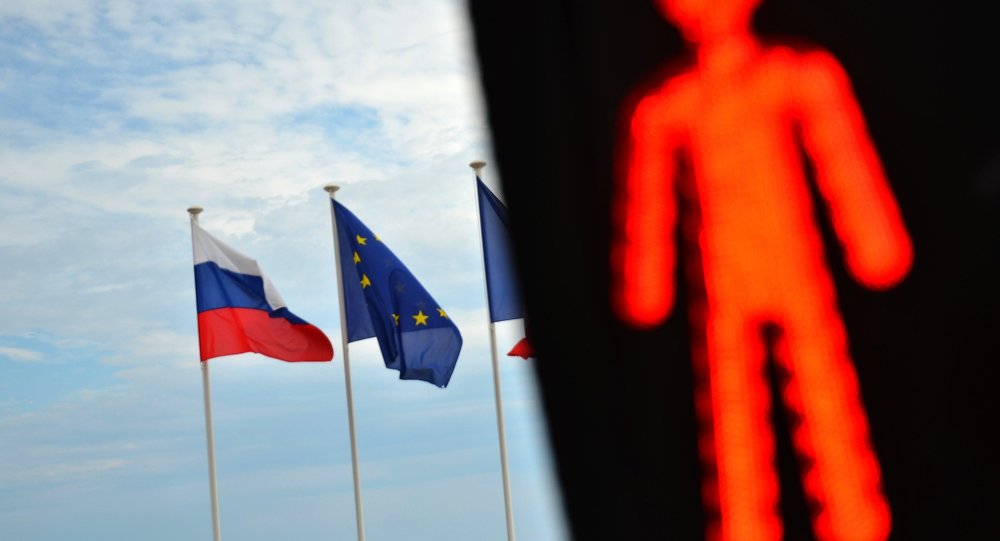 MOSCOW (Sputnik) - Russia is not currently negotiating with the European Union the possibility of lifting economic sanctions, First Deputy Chief of the Russian Government Staff Sergei Prikhodko said, stressing that it is not up to Moscow to be the one to undertake conciliatory steps.

"There are no 'negotiations' on lifting the illegitimate unilateral restrictive measures imposed on our country. It was not Russia who started this sanctions standoff. It is not up to us to be the first to undertake conciliatory steps", Prikhodko told reporters when asked about possible negotiations with the EU.

The senior government official observed that the European Union imposed sanctions on Russia on the pretext of a conflict in eastern Ukraine, stressing that this linkage was artificial and continued to complicate the Russia-EU relations.

"First, we are not a party to the intra-Ukrainian conflict. Second, the prospects for normalizing our relations with the EU automatically become hostage to [...] the bad will of the Ukrainian authorities who have demonstrated multiple times their lack of interest in implementing the Minsk agreements", Prihodko told reporters.

Earlier, EU leaders unanimously agreed to extend economic sanctions on Russia for another six months and called for the urgent implementation of the Minsk agreements on the Donbass conflict.

The armed conflict in the east of Ukraine was triggered in 2014 after the self-proclaimed Donetsk and Luhansk people's republics announced their independence from Ukraine, refusing to recognize a new government which seized power after the overthrow of then-President Viktor Yanukovych.

In 2015, Ukraine, Russia, France and Germany signed the so-called Minsk ceasefire accords, but both Kiev and Donbass regularly accuse each other of ceasefire violations.

Moscow is prepared to discuss Russian gas supplies to Europe during upcoming talks between the Russian and French prime ministers, Prikhodko said.

"We are ready to discuss any topic, including the one related to the supplies of the Russian gas to Europe", Prikhodko told reporters.

The senior government official stressed that Russia was ready to continue transporting gas to Europe via Ukraine "under economically viable terms and in case of a fair settlement of all legal disputes between Gazprom and Ukraine's Naftogaz".

In July 2018, Russia, Ukraine and the European Commission held the first round of trilateral talks on the future of gas transit via Ukraine. The second round concluded without an agreement in late January 2019. The current contract regulating the transit of the Russian gas through Ukraine between Gazprom and Naftogaz expires on 31 December 2019.

"We expect that their meeting in Le Havre is just the start of a journey. The prime ministers have a lot of things to discuss. There are a lot of questions in the Russian-French ties that require a joint search for answers and compromise. We are certainly ready to welcome Philippe if he decides to reciprocate the visit", Prikhodko said, adding that "We are working on a concept and dates for a Moscow conference on economic challenges linked to climate change".

Moreover, the meeting may contribute to resuming the work of a bilateral intergovernmental commission and security cooperation council, Prikhodko stressed.

"The talks are expected to contribute to resuming the pre-crisis regime of work of the key mechanisms of the Russian-French intergovernmental cooperation [including the intergovernmental commission and security cooperation council], the activities of which were suspended at the initiative of the French side in 2014", Prikhodko said.

According to the senior government official, French business in Russia "displays a keen interest" in Russia's national projects, as evidenced by "the regular participation" of French companies in the annual St. Petersburg International Economic Forum.

"We have a multipronged partnership consisting of launch services, satellite building and space science. There is a plan for launches of the Russian Soyuz rocket from the spaceport in French Guiana. There have been 21 successful launches […] The batch of contracts they have will allow the launch pad to work nonstop at least until 2022", Prikhodko stressed.

In June 2015, Russian space agency Roscosmos signed contracts with France’s Arianespace and the United Kingdom’s OneWeb for carrying out 21 commercial launches to bring 672 satellites into earth orbit atop Soyuz rockets launched from Kourou, as well as the Russian cosmodromes at Baikonur and Vostochny.