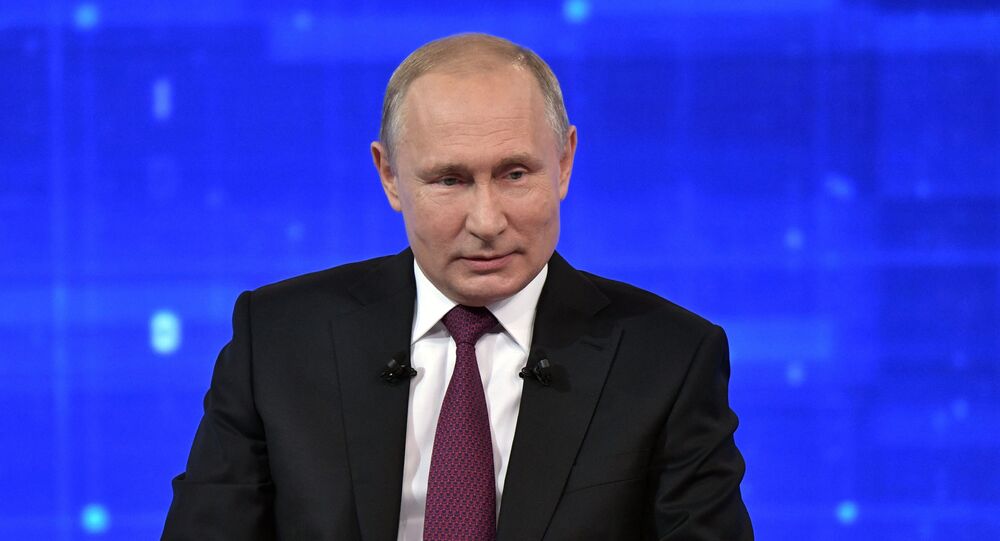 Not a Space Alien: Putin Suggests How to Fight Sloth, Reveals Cause of Regret During Q&A Programme

During the programme, the Russian president revealed how to fight laziness, and hinted at a colleague of his who's apparently good at telling jokes.

While Russian President Vladimir Putin responded to a large number of poignant questions during his annual Q&A session, the programme was also rife with more lighthearted and humorous occurrences.

Here's but a few such episodes that took place during the event.

The Russian president responded negatively when one of the programme's participants inquired whether he's a space alien.

“I'm not, and I got proof of that, along with witnesses like my relatives and my children”, Putin pointed out.

When asked about how he deals with laziness, Putin remarked that feeling lazy is natural as your body is merely telling you that it needs rest, and rest is important.

The president's recipe for combating sloth, however, is simple– just start working.

Replying to a question about why he's so polite, Putin simply remarked that he grew up in the city St. Petersburg, which was called Leningrad back then, and that local environment must've rubbed off on him.

“Political culture is part of our common culture, and if someone lacks it, it's their problem”, he simply said.

One one member of the audience asked if Putin feels tired or bored of being the president of Russia, the latter's response was curt and to the point.

“No”, the president simply said, noting that he wouldn't have participated in this year's presidential election otherwise.

In response to a question about whether he knows any jokes about himself, and if so, would he share one with the public, Putin said he'd do no such thing.

“I know have a colleague who does it better than me”, the president cryptically remarked, possibly referring to Volodymyr Zelensky, a Ukrainian comedian who recently was elected as President of Ukraine.

The president also recalled one event which makes him feel ashamed of himself, when replying to the final question during the program.

As Putin explained, during his visit to one of Russia's regions in early 2000s, a local woman passed him a note, even falling down on her knees when doing so.

And while the head of state promised to read the note in person, he passed it to his aides who subsequently lost the missive.

“I feel ashamed [of it] till this day”, Putin revealed, adding that he now reviews all such missives in person.

Putin on Reported US Attacks on Russian Power Grid: We Are Forced to React