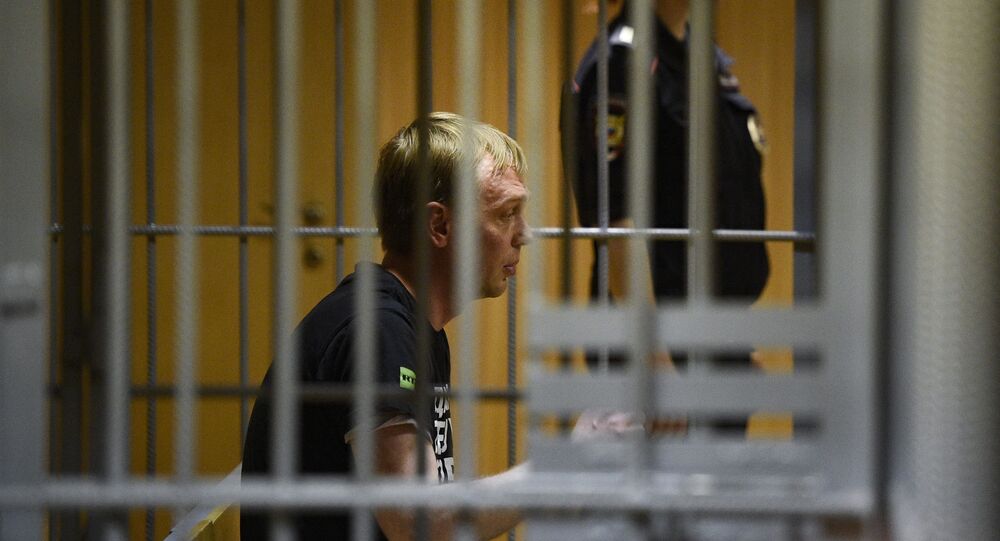 Three leading Russian newspapers — RBC, Kommersant and Vedomosti — were issued with identical front pages on Monday to express their support for Golunov. The newspapers voiced concerns in their joint statement that Golunov's case might be linked to his investigative journalistic work, which is famous for its focus on corruption in the country.

"The president has been briefed on these solidarity actions. Moreover, he obviously looks through newspapers himself, so he is aware of the case, he knows what is happening," Peskov told reporters.

Dmitry Peskov denied the existence of instructions to close the case of journalist Ivan Golunov before the "Direct Line" with President Vladimir Putin June 20.

"I can deny this. There are no and there can be no such instructions," Peskov said in response to a relevant question.

© AP Photo / Dmitry Serebryakov
Putin Was Briefed on Russian Reporter Golunov's Case
He said he had briefly read "a couple of hundreds of thousands of questions" for the "Direct Line" and added "there are questions" on Golunov's case, "but not too many."

Police detained investigative journalist Golunov on Thursday after finding in his possession five packages of banned drugs. Later, cocaine was found in Golunov's apartment in Moscow. The reporter was put under house arrest by a court on Saturday, despite him maintaining that the drugs were planted. His fingerprints were not found on any of the items that were seized during the search of his apartment as part of the investigation.

The story has drawn massive attention both from the authorities and journalistic community.

Peskov said on Monday that the Kremlin believed it was too early to make any sweeping conclusions about the distrust of the society and media in the police and courts relying on the case of Golunov. He stressed that the Kremlin was closely monitoring the situation.

Mass Events in Moscow May Hinder Russia Day Celebration, But Up to Authorities — Peskov

Mass events in the Russian capital, including in support of journalist Ivan Golunov, who is under house arrest on drug possession accusations that he denies, may hinder celebrations of the Russia Day, but this is up to the local authorities to decide, Kremlin spokesman Dmitry Peskov told reporters Tuesday.

"As for the action, this is, of course, the prerogative of the city authorities in the first place, but at the same time, tomorrow is a day off, tomorrow is Russia Day, so, of course, it would seem that holding some mass events could become an obstacle for, let's say, a festive atmosphere. But I repeat once again — this is up to the city authorities," Peskov said when asked about the Kremlin's attitude toward the planned event.

Earlier, a number of media outlets announced plans to hold a march for the freedom of Golunov in downtown Moscow on June 12. However, the city authorities say they have not received notification of the action, and do not comment on the information that an application to hold a rally "For the Freedom of Ivan Golunov" at Sakharov Avenue on June 23 has been submitted to city hall.