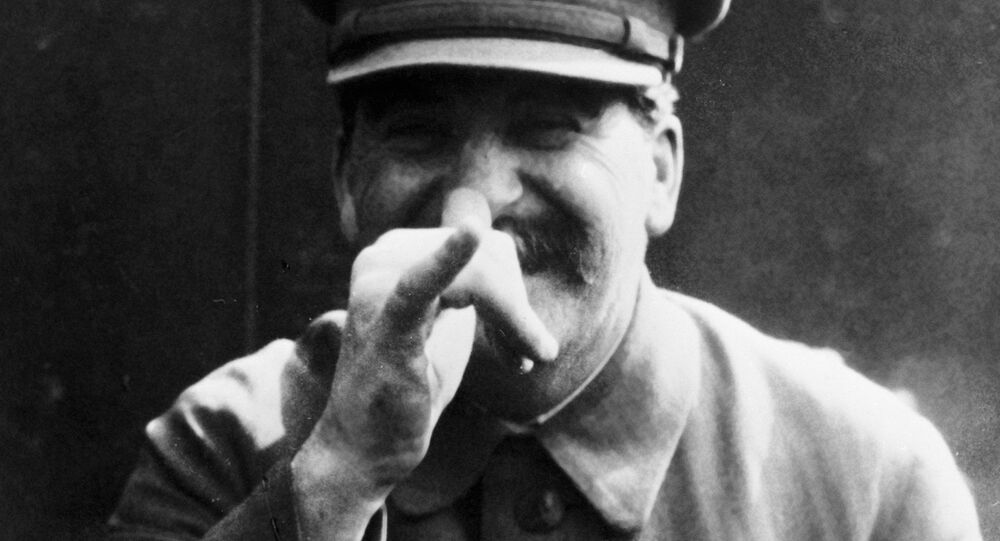 A new adult-themed fantasy game invites gamers to meet "the greatest dictator in history" to seduce, torture, or advise him.

Obscure indie game developer Boobs Dev has announced "Sex With Stalin", a single-player game where the goal is for the "young time traveller" player to become "intimately" acquainted with Joseph Stalin in a variety of "unique authentic locations", including an interrogation chamber, cabinet, bedroom, and secret "red room."

In addition to the ability to "seduce" the Soviet leader, the game also allows users to "show him where the hell is!" and to "hit him in the stomach, plug in the electricity to his nipples," or "jump on his back".

Sputnik got in touch with Georgiy Kukhtenkov, the one-man company behind the controversial game project, to find out more. He said that his creation was geared toward "people who have heard about Stalin, and just people who are interested in the project" in general. He also confirmed that an English-language version would be made available come October.

© Sputnik / Aleksei Vitvitsky
NATO Sec Gen Stoltenberg Says Hitler, Stalin and Daesh Were Enemies of Freedom
On Steam, "Boobs Dev" is known only for one other game – "Boobs Saga", a survivor horror adventure game. Asked what prompted him to switch genres from fantasy to history, Kukhtenkov said that he still considers "Sex With Stalin" a fantasy game.

"This is a game where events take place in a fictional universe. There is a plot device in fantasy literature known as 'accidental travel' associated with the sudden travel of the hero into the past or an alternative reality. However, one shouldn't confuse this with the 'butterfly effect'. In contrast to the latter, the choices or behaviour of the player do not change the course of history. Or, as in my project, 'what happens in Stalin's cabinet stays in Stalin's cabinet'", he joked.

Even though its release is over four months away, "Sex With Stalin" has already garnered intense interest online, with Steam users getting into raging political debates over the content, or revealing dark sexual fantasies about playing the game with a "Lady Stalin with big boobs".

Others were offended by the concept, asking whether it would be appropriate to release a similar game "where it's possible to rape Churchill, hang Hitler, smack the queen of England around and send George W. Bush to the electric chair as Saddam Hussein".

© Sputnik
Hitler Kaput: How Stalin Learned About the Fuhrer's Suicide
The game also managed to unnerve groups sympathetic to the Georgian-born Soviet leader, including the Communist Party of the Russian Federation, the second-largest party in Russia's parliament. On Tuesday, CPRF lawmaker Olga Alimova suggested that the game's developer needed medical evaluation, and called the very concept of the game "an abomination".

Maxim Suraikin, former presidential candidate and leader of the Communists of Russia, a smaller party separate from the CPRF, also condemned the game, saying there was "no question" that it should be banned from sale in Russia. "The name itself already sounds outrageous and perverted", he exclaimed.

Over 65 years after his death, the legacy of Joseph Stalin remains hotly debated in Russia and other former Soviet republics. Criticised by human rights activists and Western historians for his brutal purges, the network of Gulag prison camps, and the vast NKVD surveillance regime, Stalin has been recognised by others for his role in industrialising the country and preparing it for the fierce conflict against Nazi Germany and its allies during World War II and turning the USSR into a superpower. Earlier this year, 70 percent of respondents told Russia's Levada Centre polling agency that overall, Stalin played a positive role in Russia's history, while 19 percent said he did more harm than good.