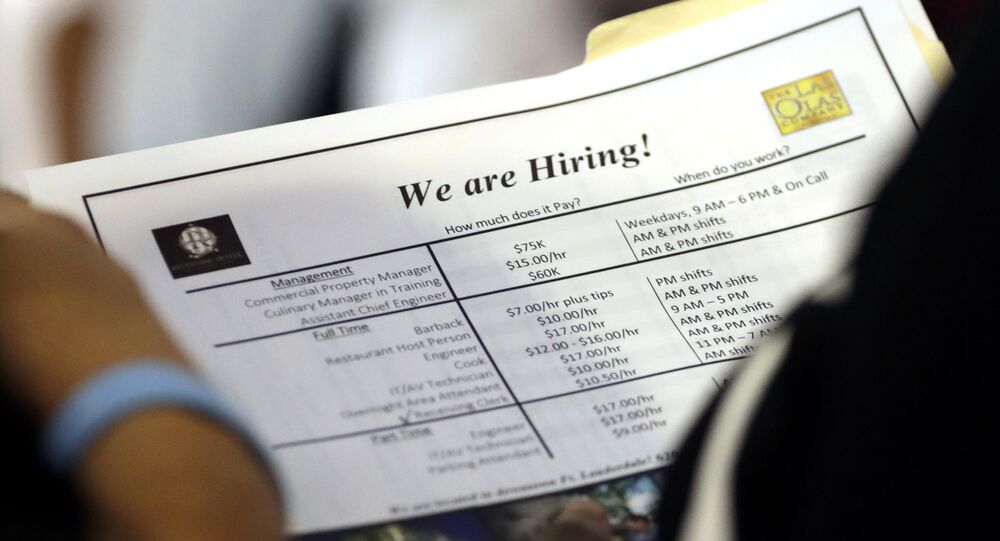 Until recently, analysts had to study employment levels without being able to directly compare the positions of various groups in different nations.

Economist Mark Agranovich has developed a new analytical indicator for assessing the chances of employment based on education. It works in any country and makes it possible to compare the situation in different countries (or regions of the same country) in different periods of time.

Mark Agranovich is a prominent Russian economist, Director of the Centre for Monitoring and Statistics of Education of the Federal Institute for Education Development at the Russian Presidential Academy of National Economy and Public Administration (RANEPA).

"The indicator shows the chances of getting a job for specific educational levels, gender and age relative to the employment chances of the national workforce as a whole," Agranovich said.

© REUTERS / Luke MacGregor
UK Real Earnings on the Rise, Employment Rate at Record High Despite Brexit Shambles
He also noted that the description of the indicator and the example of an analysis based on it were published in the annual OECD report on education statistics Education at a Glance, and that specialists from different countries have already shown much interest in the development.

Agranovich said the indicator is easy to use. It is based on the ratio between the employed and the unemployed.

"The percent of employed people at a certain educational level, gender and age in the total number of the employed is compared to the same share of unemployed in the total number of the unemployed. If the result equals one unit, the unemployment level in that group corresponds to the national average. If it exceeds one unit, it's higher than the average; if it's below it, the level is lower," Agranovich explained.

Until now experts have analysed employment levels based on an "unemployment level" that did not allow them to directly compare the positions of different groups in various countries, for example, the unemployment rates of younger or older individuals. To make this comparison, they had to recount it against the general unemployment level in a country.

"This new indicator does not have this limit. It does not require any recounting and makes it possible to compare the situation in the country in different years and crosscheck countries with different unemployment levels. This is why it is so easy to use. It is very convenient," Agranovich said.

He suggested using the indicator to assess unemployment rate categories to reveal the most vulnerable groups. This is especially important for large countries with varying conditions between regions.

The indicator was applied to the Russian labour market as Russia launched pension reform in 2019, a program to be completed in 2034.

© RIA Novosti . Aleksandr Astafiyev
Pension Reform May Need Funding Changes - Medvedev
Agranovich decided to study how the employment of men and women in pre-pension and retirement ages depends on education level because education is a key parameter that influences both employment and labor force participation.

"Why do older women find it easier to get a job than their male counterparts? I think several factors are at work here. First, women are usually more tolerant of salary levels. Second, men are less healthy. Men's chances of employment decline sooner unless they have rare, irreplaceable job skills," Agranovich said.

He believes each country needs to develop its own policy of support for seniors not only in different regions but also in a targeted way — based on age and education for every group of working individuals.

UK Guarantees Freedom of Employment to EU Citizens During Transition