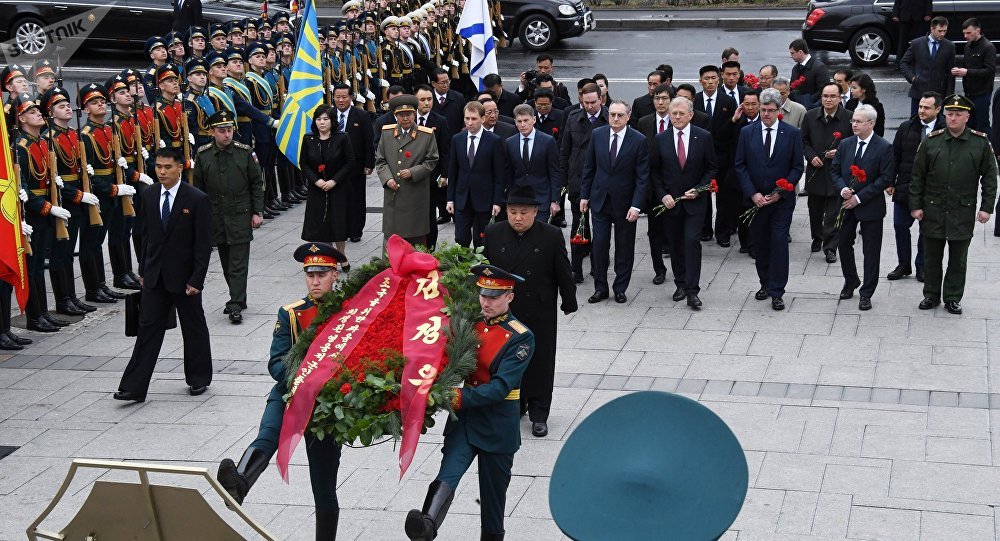 Before Kim's arrival, fireworks were fired from a ship docked nearby.

A red ribbon on the wreath read "Kim Jong Un" and "to Warriors Who Sacrificed Their Lives in The Fight For The Motherland" in Korean.

The orchestra of the honor guard played the Russian national anthem before the ceremony and a Korean folk song, Arirang, after it.

After laying the wreath, Kim left the site in his black limousine.

© Sputnik / Vitaly Ankov
Bread & Salt: WATCH Kim Jong-un's First Encounter With Russian Cuisine
The ceremony was initially expected to be held earlier in the day, however, the wreath was taken away from the memorial and was returned there without its plastic cover and the ribbon, prompting speculations that the ceremony was called off.

A spokesperson of the Russian Far Eastern Railway has old Sputnik that Kim's private train was expected to leave Vladivostok at 05:00 GMT as planned.

Kim arrived in the Russian Far Eastern city on Wednesday evening for his first-ever meeting with Russian President Vladimir Putin. The historic summit was held on Thursday. The two leaders spent around two hours for a one-on-one meeting and subsequently held negotiations in an expanded format. Putin and Kim discussed the situation on the Korean Peninsula and various joint projects during the negotiations.