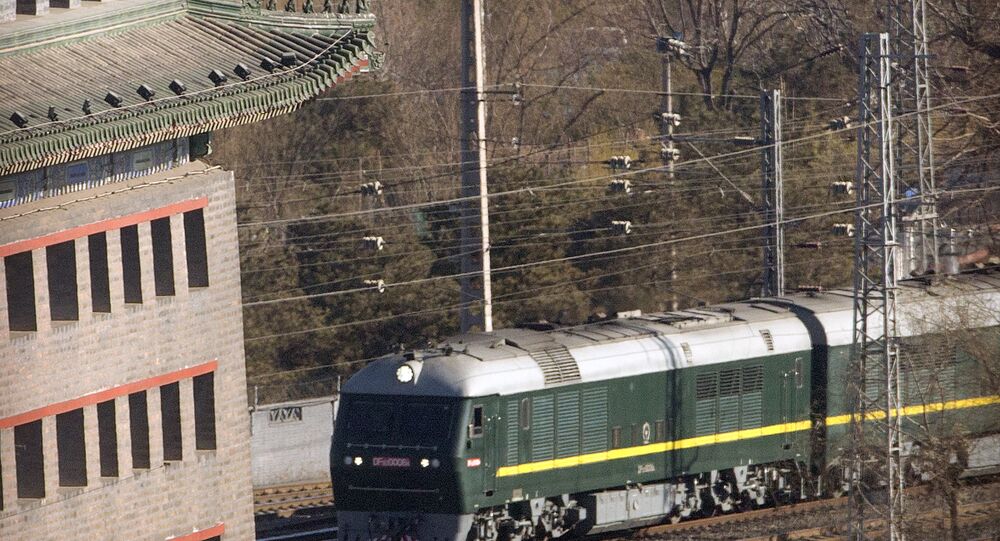 Earlier it was reported that Kim Jong Un's train had stopped at Khasan railway station, a Russian border town.

The armoured train from North Korea has crossed a railroad bridge over the Tumen River, which separates Russia from North Korea. According to the source, Kim was welcomed with bread and salt; he took flowers and entered the station building.

"I am happy to be on Russian soil," Kim reportedly said upon his arrival at Khasan railway station, adding that the current visit was just "a first step" and that he would visit Russia again.

Kim has visited the Russian-Korean House of Friendship in Primorsky Territory, a source in Far Eastern Railway told Sputnik.

The House of Friendship was built in 1986 ahead of former North Korean leader Kim Il Sung's visit to the USSR.

Meanwhile, a Sputnik correspondent reported that a group of North Korean officials had inspected the premises of the Vladivostok railway station on Wednesday, hours before North Korean leader Kim Jong Un's arrival in the Russian Far Eastern city.

The airport express train terminal of the Vladivostok train station has reportedly been closed to passengers and security measures have been reinforced in the vicinity ahead of the arrival of  Kim Jong Un.

Earlier, the Korean Central News Agency reported that Kim was seen off by leading officials from the Worker's Party of Korea (WPK), the country's government and the armed forces.

The media also specified that Kim was accompanied by Kim Phyong Hae and O Su Yong, members of the Political Bureau and vice-chairmen of the WPK Central Committee, country's Foreign Minister Ri Yong Ho, Chief of the General Staff of the Korean People's Army Ri Yong Gil and other high-ranking officials.

Kim is expected to arrive in Vladivostok on Wednesday.

On Tuesday, Kremlin aide Yury Ushakov said that Putin and Kim would meet on 25 April in the eastern Russian city of Vladivostok.

Ushakov noted that the talks would focus on a political and diplomatic solution to the Korean Peninsula's nuclear standoff.

This will be Kim's first visit to Russia. His predecessor, Kim Jong-Il, visited Russia three times; the last time was in 2011.

On 12 April, North Korea's Supreme Leader Kim Jong-un was re-elected as the chairman of the State Affairs Commission during the latest session of the state's parliament.