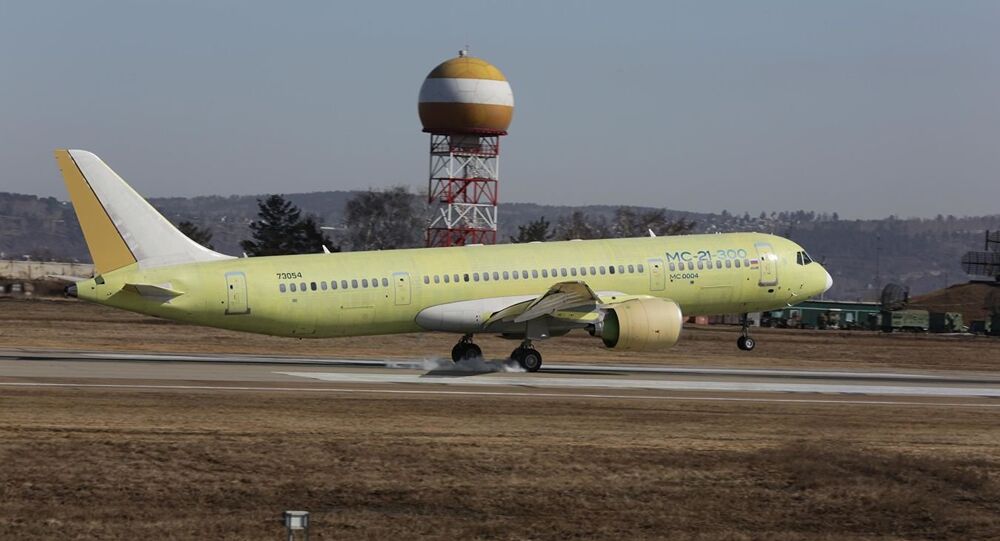 Earlier, the Russian government estimated that an additional 2.7 billion rubles (about US$40.7 million) in funding would be necessary for the creation of domestic composite wing materials for the MC-21 to replace components sourced in the United States and Japan which have been made unavailable by US sanctions.

Russia's United Aircraft Manufacturing Corporation has released footage of the beginning of testing of the third prototype of the MC-21-300 single-aisle twinjet airliner as it took off from the Irkut Aviation Plant's test airfield on Saturday.

The test flight lasted 1 hour and 30 minutes, with the plane reaching an altitude of up to 3,500 meters and speeds of up to 500 km/h. In the footage, the plane, painted in a simple yellow livery, can be seen preparing for departure, taking off, making several passes over the airfield, and coming in for a landing.

A fourth MC-21 prototype is expected to begin flight testing later this year.

The Irkut Mc-21 is a new Russian short-to-medium range airliner with a capacity to haul between 132 and 211 passengers between 6,000 and 6,400 km. Certification is expected to be completed by 2020, with production beginning by 2021. The plane is expected to become a direct competitor to the Boeing 737 and the Airbus A320, and has been touted as having the potential to be a cheaper, more economical and easier to maintain alternative to these foreign planes.

© Sputnik / Sergey Mamontov
Could Sanctions Ground Russia's Next-Gen Passenger Jet?
The MC-21's introduction was delayed earlier this year after US sanctions against two Western suppliers cut off access to composite wing materials. According to Russian business media, Russia has stocks to build six more planes, but will need to create a domestic composite materials industry for mass production to begin.

Last week, Sputnik reported that the Russian cabinet of ministers had calculated that the cost of design, testing and production of domestic composites for the plane would cost 2.7 billion rubles (about $40.7 million), and push the plane's introduction back from late 2019 to late 2020.

On Friday, industry sources speaking to Russian business newspaper Vedomosti indicated that the government had recommended that Russian budget airline Pobeda hold off on its planned purchase of 30 Boeing 737 MAX jetliners and buy the MC-21 instead. The company already has a contract for the purchase of 20 737s between 2019 and 2021, and expects to receive 30 more after 2022. However, a representative from Aeroflot, Pobeda's parent company, told the newspaper that the company is concerned that it may not receive a sufficient number of MC-21s in time to meet its annual passenger quotas.

© Sputnik / IRKUT Corporation/Marina Lisceva
Syrian Air Airline in Talks to Buy Russia's MC-21 Passenger Planes - CEO
UAC President Yuri Slyusar told Vedomosti that just 10 MC-21s would be produced in the first year of production, with 20 built in the second year, and production continuing to climb until it reaches its full capacity of 72 airliners in its seventh year. As of mid-2018, the MC-21 has accumulated 175 firm orders from Russian and foreign airlines.
...
Reddit
Google+
Blogger
Pinterest
StumbleUpon
Telegram
WhatsApp
700