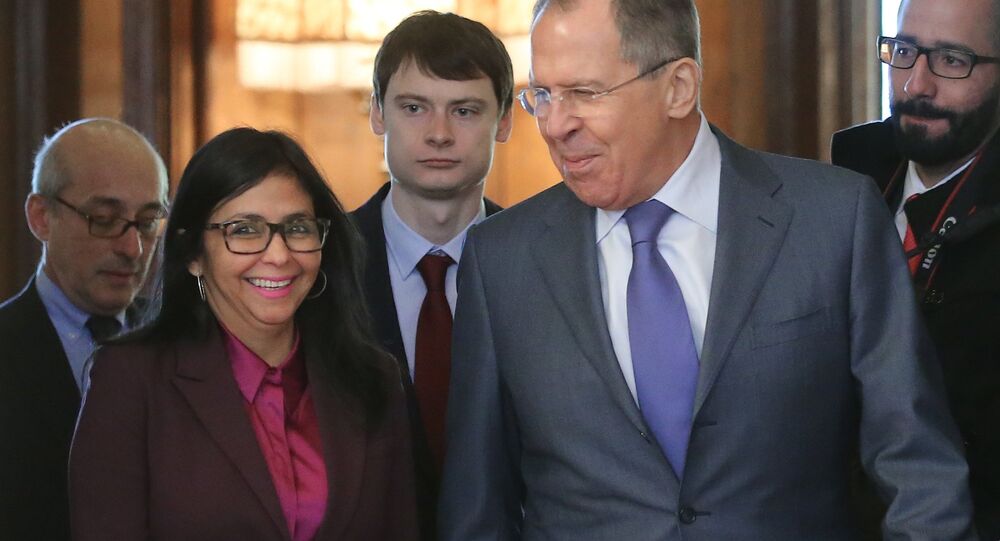 Asked whether Putin will meet with Rodriguez, Peskov said: "No, there is no such meeting."

“You know that Foreign Minister Lavrov said that he had such a meeting scheduled,” he said.

On US Initiative to Disclose Putin's Income

Peskov dismissed new US bipartisan bill seeking to reveal the income and assets of Russian President Vladimir Putin and said that the initiative could not be treated seriously.

"It hardly deserves serious attention. [The bill] is just one of those russophobic efforts which we have learned to treat with irony," the spokesman said.

Several US lawmakers introduced to the House of Representatives on Wednesday a bill requiring the US intelligence to provide Congress with the information on Putin's assets as well as wealth considered to be under his control.

On Possible US Sanctions

"We have been saying for a long time already that all measures to hedge risks of further, unpredictable, unfriendly actions on the part of the United States were taken by our government in advance, therefore, all preventive measures have already been implemented. So, here, in this case, there should not be any concerns about the stability of the banking system," Peskov told reporters.

The Kremlin considers it positive that the negotiation process of US President Donald Trump and North Korean leader Kim Jong-un has not been interrupted, but believes the sides have not yet reached any tangible agreements, Peskov said Thursday.

"The Kremlin did not have the opportunity to follow the talks of Trump and Kim Jong-un. They took place in a closed format — this is the first. From what we see from official statements, from statements by President Trump himself, other high-ranking representatives of the White House, so far, we understand that the negotiation process has not been interrupted, which is certainly positive. But, at the same time, no tangible agreements have been reached," Peskov told reporters.

© REUTERS / Leah Millis
N Korea Was Ready to Denuclearise Some Areas, But US Was Not Ready to Lift Sanctions in Exchange
He said, the Kremlin did not know details of North Korea's position on the nuclear program at the Hanoi summit, and was unaware of whether US representatives conveyed it precisely.

Peskov said there was a feeling that the practice of small reciprocal steps did not work.

"Every step should have behind it certain manifestations of flexibility, certain concessions and certain small agreements. It is impossible to immediately seek a quick solution to such a complex problem," Peskov said.

The White House said earlier in the day Trump and Kim had not reached an agreement during the summit in Hanoi on February 27-28, but had a constructive meeting.