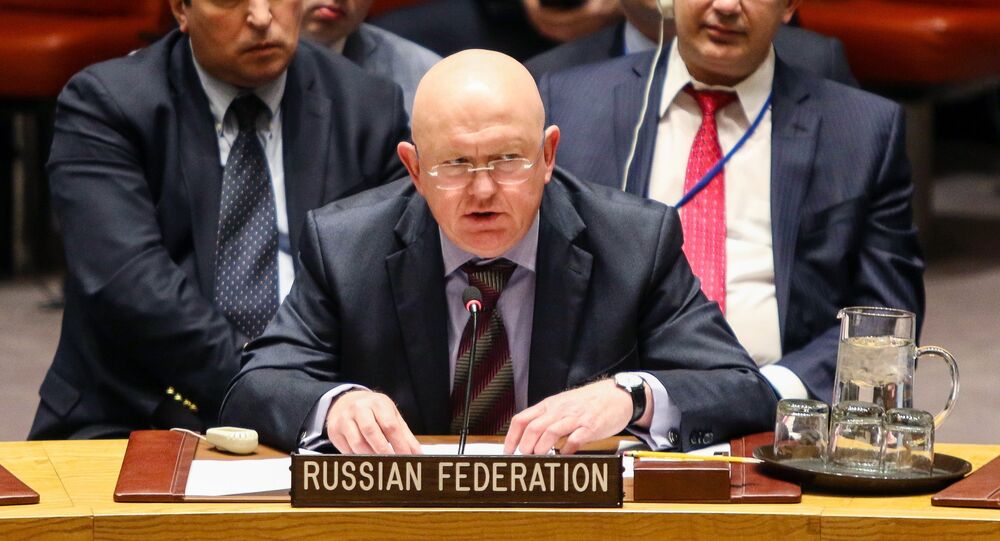 UNITED NATIONS (Sputnik) - The United States encourages provocations by Ukraine and then covers them up, including the recent naval incident in the Kerch Strait, Russian Ambassador to the United Nations Vassily Nebenzia told the UN Security Council.

"Same for the United States — this is the real ‘puppet-master’ behind the entire ‘Maidan theater’ who now encourages and covers up any provocation of Kiev, including the recent one in the Black Sea, willingly delivers arms to the country and pushes it toward [taking] reckless steps," Nebenzia said on Tuesday.

Nebenzia pointed out Ukraine is sabotaging the Minsk agreements and Western countries cover up Kiev’s actions.

"Today, to our regret, there is all the reason to say that Kiev comprehensively and consciously ignores and sabotages the Minsk agreements and our Western partners cover up for all of its unlawful acts," Nebenzia said.

© CC BY-SA 2.0 / Ministry of Defense of Ukraine
US to Boost Funding for Ukrainian Navy After Kerch Row With Russia
On Tuesday, the UN Security Council convened to discuss the ongoing crisis in Ukraine, particularly in the Donbas region as well as to address the implementation of the Minsk agreement. Under the accord, the parties to the conflict should commit to the withdrawal of weapons.

The conflict in Donbass started in 2014 when the Ukrainian authorities launched a military operation against the self-proclaimed people's republics of Donetsk and Luhansk, which had refused to recognize the new government in Kiev that came to power after what they considered to be a coup.

In 2015, a ceasefire deal was signed in Minsk following talks brokered by the leaders of the so-called Normandy group comprising of Russia, France, Germany and Ukraine. Sporadic fighting has continued in Donbas and the situation there remains tense as both sides accuse the other of violating the ceasefire.

Nebenzia noted that Western countries are responsible for staging the coup d’etat in Ukraine that has resulted in the country’s economic woes, making it "commodity appendix" and a supplier of labor to the European Union.

© Photo : Roscosmos/Anton Shkaplerov
Ukrainian Navy to Engage Intl Observers for Next Kerch Strait Passage - Official
On November 25, three ships of the Ukrainian Navy — Berdyansk, Nikopol, and Yany Kapu — crossed the Russian border, entered Russian territorial waters that were temporarily closed, and began moving toward the Kerch Strait, which serves as the entrance into the Sea of Azov. The Ukrainian vessels and their crew were detained by Russia after failing to respond to a lawful demand to stop.

Moscow has repeatedly slammed Kiev’s attempts to portray the detained sailors as prisoners of war, saying they face criminal charges. Russian President Vladimir Putin has said the incident was a provocation to serve as a pretext to declare martial law; the Ukrainian authorities did announce martial law that lasted for a month. Putin said the provocation could be linked to Ukrainian President Petro Poroshenko's low approval rating ahead of the country’s presidential election scheduled for March.