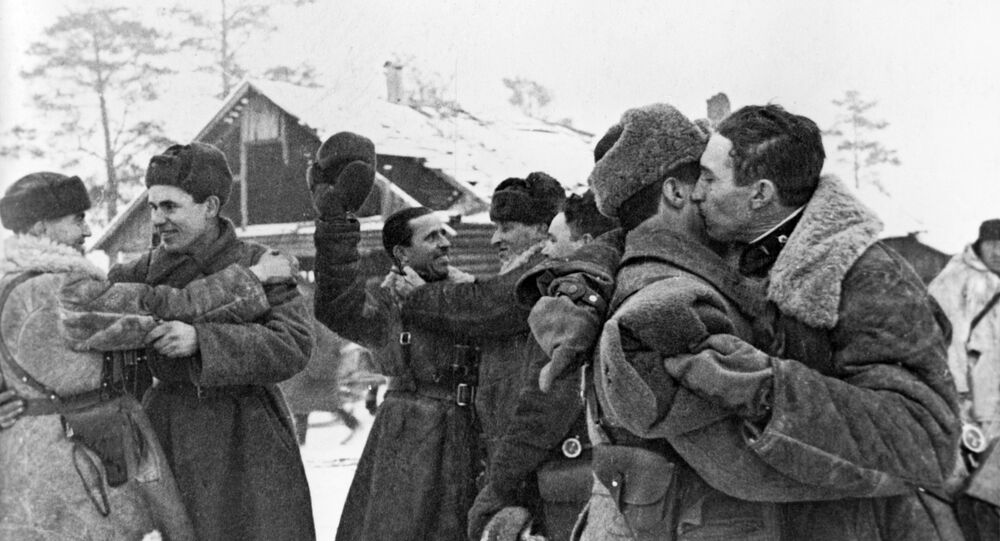 The Siege of Leningrad was one of the most brutal, painful and dramatic chapters of World War II, and saw Russia's second-largest city hold out against Nazi forces for 2 years, 4 months, 2 weeks and 5 days, at the cost of over 350,000 military and nearly 650,000 civilian lives.

St. Petersburg solemnly commemorated the 75th anniversary of the lifting of the Siege of Leningrad on Sunday, with a military parade held before Palace Square involving over 2,500 troops and 100 pieces of military equipment, both historical and modern. Troops carried the banner of victory, as well as banners of the fronts which took part in the operation to free the city, as veterans and blockade survivors looked on from the stands.

Ahead the anniversary, the Russian Ministry of Defence declassified and published online several dozen new documents providing fresh insight into wartime operations around the city. The materials paid special focus to the Road of Life, the ice road and railway supply route built on top of the frozen Lake Ladoga during the winter months which connected the city to Soviet supply lines and saved well over a million residents of Leningrad from certain death.

The documents also revealed operational details to build a secret underwater pipeline for transporting fuel to the city, as well as Soviet naval operations in and around the lake, and other information, complete with detailed maps, decrees, resolutions, logs and battle reports. The documents also include the famous "Order No.1," written by Leningrad Front Commander General L.A. Govorov on 27 January 1944, marking the completion of the operation to fully lift the blockade. On that day 75 years ago, at 8 pm, 324 guns fired 24 volleys in honour of the hard-fought victory.

Ahead of Sunday's commemorations, the German Foreign Ministry issued a statement, saying that the liberation of Leningrad freed the city from "the blockade of the German Wehrmacht, which entered history as a cruel crime against the whole city and its population."

The blockade's lifting ended "872 days of death, starvation and suffering in which over a million people died." The German government, the ministry said, would make a "voluntary humanitarian gesture toward the victims of the blockade who are still living in the form of 12 million euros toward the modernisation of a hospital for war veterans, and the creation of a German-Russian Centre in St. Petersburg to facilitate meetings of the Russian and German people, as well as the victims of the blockade."

© Sputnik / Sergey Pyatakov
Eight WWII-Era Artillery Shells Discovered in Moscow
Commenting on the goodwill gesture, Russian Foreign Ministry spokeswoman Maria Zakharova said that it does not mean that the question of the reparations for blockade victims is closed, "regardless of their nationality." Zakharova recalled that Berlin had previously paid 2,500 euros in compensation to blockade victims, but only to those of Jewish heritage, as part of Germany's compensation to living victims of the Holocaust.

The city of Leningrad was of crucial importance during the Second World War. A major industrial and logistical hub, the city was the base of the Soviet Baltic Fleet, and, just as significantly at the time, carried the name of the USSR's founder, Vladimir Lenin. Its capture would mark a significant blow to Soviet morale, and enable the Wehrmacht to establish an uninterrupted supply route for Army Group North.

The Nazis' inability to break through into the city meant that considerable German forces were tied up and made unavailable for operations elsewhere. The city's resistance also ultimately made it impossible for the Nazis to seize the Arctic ports of Murmansk and Arkhangelsk, thus allowing US, British and Canadian Arctic convoys to continue providing much-needed wartime aid to the USSR.

© Sputnik /
This Literal 'Road of Life' Helped Leningrad Withstand the 900 Day Nazi Siege (VIDEO)
Facing stiff resistance as they approached Leningrad in 1941, the Wehrmacht changed tack, encircling the city and hoping to starve and bomb it into submission. On capture, Wehrmacht high command was instructed to drive any surviving residents out and "wipe Leningrad from the face of the earth".

For the next 900 days, the blockaded city would continue to hold out, facing drastic shortages of just about everything, including food, ammunition, and fuel, with this topped off by regular artillery shelling and aerial bombardment by the Luftwaffe. To the west of the city, between January 1942 and May 1943, the Red Army waged a bloody battle to hold on to the left bank of the Neva River, with up to 200,000 Soviet troops and 160,000 German troops killed on a strip of land measuring just 3 square km.

The stories of mass heroism and personal sacrifice in Leningrad are too many to recount, and include legends of lorry drivers continuing to make the journey across Lake Ladoga to bring supplies into the city and evacuate civilians under melting ice and constant Luftwaffe bombardment, famished factory workers (including children) working day and night to build weapons and munitions, and art historians working tirelessly to save the city's priceless art treasures and monuments from destruction.

An estimated 649,000 civilians from the city's pre-war population of 3.1 million died in the siege, the vast majority of them from starvation. Over 1.7 million residents, including 400,000 children, were evacuated during the war. An estimated 356,400 Red Army soldiers were also killed. For its resistance, Leningrad appropriately became the first city to be bestowed the title of Hero City in 1945.

Siege of Leningrad at 75: Where Russian Spirit Triumphed Over Nazi Blockade