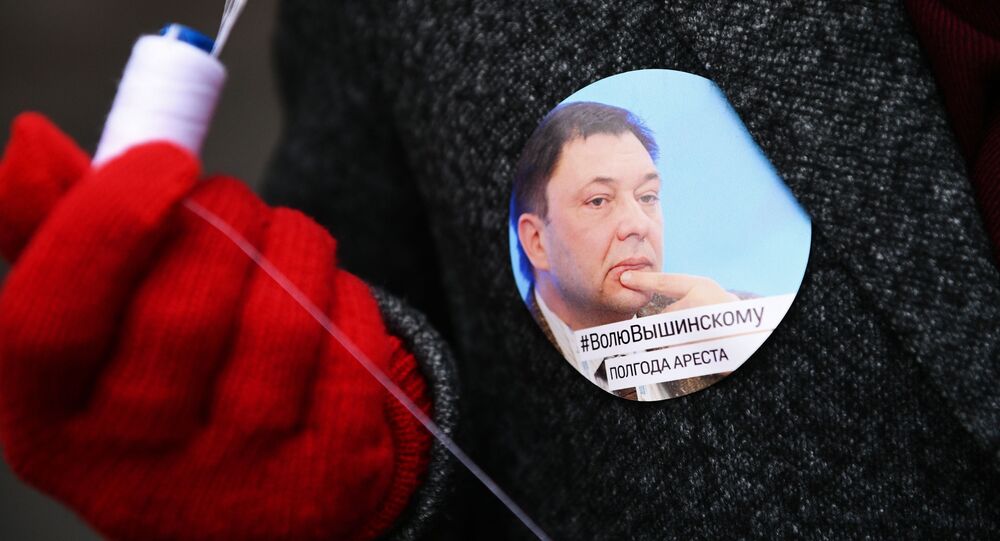 MOSCOW (Sputnik) - The Russian investigators found that Andriy Prosnyak, the head of the investigation unit of the Ukrainian Security Service's (SBU) Main Directorate, was involved in illegal persecution of Kirill Vyshinsky and launched a criminal case against the Ukrainian official, the Russian Investigation Committee stated.

"Investigators of the Russian Investigation Committee found that the head of the investigation unit of the Main Directorate of the Security Service of Ukraine Andriy Prosnyak was involved in [persecution of Vyshinsky]. Prosnyak had notified Vyshinsky about suspecting him of committing state treason", Svetlana Petrenko, a spokesman for the committee, said, adding that a criminal case under part 2 of article 144 and part 2 of article 299 of the Russian Criminal Code was launched against Prosnyak.

The spokeswoman for the Russian Investigative Committee continued on saying that the criminal case Kiev had launched against RIA Novosti Ukraine portal head Kirill Vyshinsky violates the Universal Declaration of Human Rights.

"Vyshinsky is prosecuted in Ukraine for managing the activities of the office of the Rossiya Segodnya International Information Agency. The criminal prosecution in his regard is carried out in violation of the Universal Declaration of Human Rights, according to which everyone has the right to freedom of belief and speech", Svetlana Petrenko noted.

She has also stated that the publications that the Ukrainian Security Service (SBU) attributed to Vyshinsky do not threaten Ukraine's security.

"The Ukrainian law enforcement knew for a fact that the publications that they think are a threat to Ukraine's information security were posted by third-party authors as well as before Vyshinsky began work in Rossiya Segodnya International Information Agency. According to the Russian Investigative Committee, these publications do not have any elements threatening Ukraine's security at all", Svetlana Petrenko said.

© Sputnik
Kherson Court Rejects Vyshinsky's Appeal Over Arrest Extension - Lawyer
Vyshinsky was detained in Kiev last May on charges of high treason and supporting the bid for independence by two breakaway regions, which carry a maximum penalty of 15 years in jail. A court in the southern city of Kherson has upheld his detention until February 16.