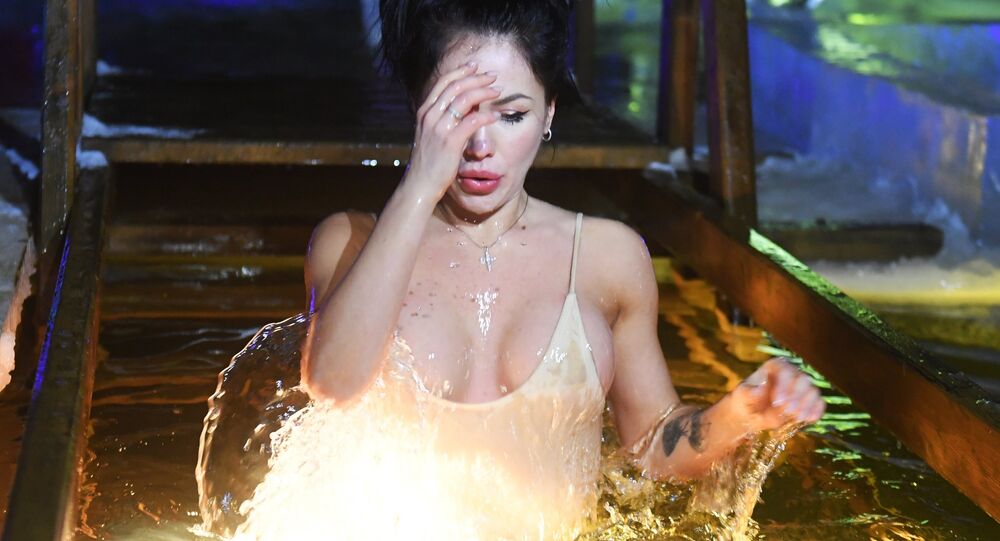 Eastern Orthodox churches, including Russia's one, celebrate Epiphany on 19 January. The occasion marks the baptism of Jesus Christ and traditionally incorporates ice bathing on the eve of the feast.

Orthodox Christians across Russia braved the freezing weather to take dips in icy waters to celebrate Epiphany. The rite is not mandatory, but is believed to cleanse the soul of impurity and be good for one's health, so no wonder it attracts a lot of people.

First, a priest should traditionally consecrate a baptistery (a tub or an ice hole) by reading a prayer over it and plunging a cross into the water.

This has become a problem for clerics in some of the coldest regions of Russia, such as Yakutia, where temperatures may drop to —70 degrees Celsius in winter. A priest in Verkhoyansk near the Arctic Circle told Sputnik that hands can get stuck to a frozen cross within just a few minutes.

It is not common to walk about in bikinis in Russia in January, but Epiphany is a remarkable exception.

Both old and young can go for it.

Former Russian ballerina Anastasia Volochkova had to chop ice with an axe before diving into a huge wooden outdoor baptistery. "Would you go for it?" she asked her followers, adding that she has been sticking to this Orthodox tradition for many years.

Moving on from celebrities to politicians: the Kremlin's press service reported that Russian President Vladimir Putin also had an "ice bath" on Epiphany, but failed to reveal where it happened. According to spokesman for Vladimir Putin, Dmitry Peskov, the president has been practicing ice bathing for several years.

Sergei Tsivilev, governor of the Kemerovo Region, also joined the celebrations. The Kemerovo Region is situated in in southwestern Siberia, where the January average temperature is below 10 degrees Celsius.

Boxer-turned-lawmaker Nikolai Valuev filmed himself taking part in ice bathing. He said temperatures fell as low as —22C as he was stepping down into an icy pond.