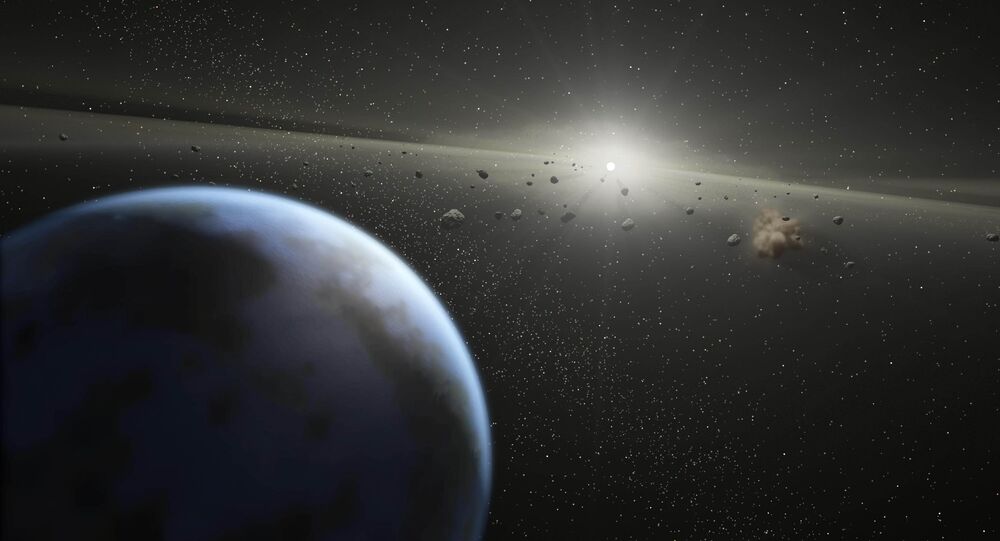 Russia Kicks Off Work on Countering 'Hazards' From Outer Space

MOSCOW (Sputnik) – According to the Russian Academy of Sciences (RAS), researchers have so far detected around 18,000 hazardous objects in space, 99 percent of which are asteroids.

The presidium of the Russian Academy of Sciences agreed upon developing a national program to research the issues and methods of countering hazards from space, such as asteroids, comets and space debris, Scientific Director of the Academy's Astronomy Institute, Boris Shustov, told Sputnik on Thursday.

"At present, foreign countries, primarily the United States, have advanced in their development of systems for detection of space hazards. At the recent meeting of the RAS presidium, the academics voted to support the draft statement to begin the work on preparing the modern variant of the national program and a wider range of issues, including the whole range of space threats," Shustov said.

© AP Photo / NASA/Goddard/University of Arizona
NASA Craft Explores Rare Asteroid That Might Be on Killer Course Toward Earth
The researcher recalled that in 2010, the academics already suggested that a federal program on countering threats from asteroids, comets and space debris be initiated but it was rejected by Roscosmos.

At the RAS presidium session on space hazards on Tuesday, the head of the strategy planning and special programs directorate of Roscosmos, Yuri Makarov, suggested that a national plan on countering such risks should be developed.

According to Shustov, Russia’s contribution to detecting dangerous asteroids and comets is 0.1 percent while the United States is the most active country in this area.

© CC0
Aliens or Divine Intervention? Study Claims Life on Earth Came From Deep Space
According to the agency, an asteroid of this size entering the atmosphere would have a similar effect to the Chelyabinsk event when a 10-ton meteor exploded in Chelyabinsk Oblast, Russia, causing serious damages in the region in 2013.

On 30 June 1908, Eastern Siberia was hit by an explosion, generally attributed to the air burst of a comet or a meteorite. According to different scientific estimations, about 850 square miles (2,200 square kilometers) of local forest was flattened.

On the Lookout: Largest Digital Camera Ever Built Will Scan Skies for Asteroids