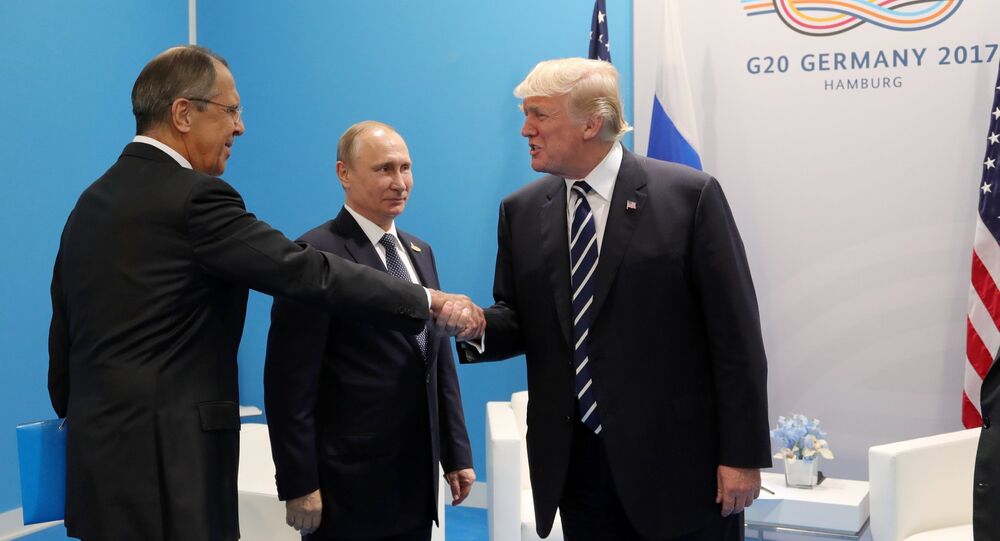 Russian Foreign Minister Sergei Lavrov held his annual large press conference on 16 January, having addressed the results of Russian diplomacy in 2018 and touched upon, among other issues, relations with the United States, the European Union, NATO as well as the Syrian crisis, nuclear arms reduction, and the much-hyped Trump-Putin Helsinki summit.

During the press-conference that lasted over 2 hours, the Russian foreign minister responded to dozens of questions on a wide range of issues:

Relations With US, Europe, NATO

The foreign minister stated that Russia wanted to restore relations with the United States and the European Union “based on equality and mutual accommodation”, but would respond to NATO’s military activity near Russia’s borders.

© Sputnik / Vladimir Vyatkin
Stoltenberg's Claims on NATO Readiness to Use Force in INF Dispute Hinder Dialogue - Moscow
Moscow has on a multitude of occasions voiced concern over the transatlantic alliance’s activities close to the country’s borders, emphasising that they jeopardised the nation’s security and violated the NATO-Russia Founding Act, which prohibited the deployment of significant fighting forces on the territories of new member states.

When asked to comment on the Brexit deal that was vetoed down on 15 January, Lavrov said that Russia is not rubbing its hands with glee over the UK’s withdrawal from the European Union, and it would like the bloc to be strong and united.

The foreign minister also underscored that Brexit was the UK’s internal affair, but Russia would like to know how the divorce will affect its trade relations with the EU.

On Syria After US Troop Withdrawal

Armaments, territories and military facilities under US control in Syria should be put under "the control of the Syrian government, the Syrian Armed Forces and the Syrian administrative structures, with the understanding that the Kurds should be provided with all necessary conditions", Lavrov said.

© Sputnik / Vladimir Vyatkin
Stoltenberg's Claims on NATO Readiness to Use Force in INF Dispute Hinder Dialogue - Moscow
He stressed that it is necessary to oust the remaining terrorists in Syria, especially in the vicinity of Idlib province, since militants continue attacking Russia’s Hmeymim base located in the coastal Latakia province.

As Lavrov noted, the situation around Idlib will be on the agenda of the upcoming talks between Russian President Vladimir Putin and his Turkish counterpart Recep Tayyip Erdogan.

In mid-December, US President Donald Trump announced a decision to bring American troops stationed in Syria back home, having declared victory over Daesh.

Russia is ready to work with the United States to save the Intermediate-Range Nuclear Forces (INF) Treaty, Lavrov said. Despite a vast number of disagreements, Lavrov expressed hope that Washington would take a responsible approach to strategic arms treaties.

The foreign minister highlighted that the US didn’t want to listen to Russia’s proposals on actions that would help dispel Washington’s concerns over Moscow’s compliance with the Treaty at the talks in Geneva.

“All this was swept aside, and the US opinions heard yesterday followed the logic of ‘you are breaking the Treaty, and we are not, that is why you, Russia, have to do what we demand and we are not obliged to do anything’. Of course, you cannot go far with this stance”.

Moscow has denied the allegations, saying that Washington, for its part, was stationing launchers for Tomahawk cruise missiles in Romania and Poland – which is prohibited under the Treaty.

The foreign minister also expressed hopes that Europe would contribute to the saving of the INF Treaty rather than give in to the United States.

“I hope that those European counties that are more interested [in this] than, perhaps, anybody else… will try to influence Washington so that it would take on a more responsible stance”.

Russia is also interested in extending the New Strategic Arms Reduction (New START) Treaty, Lavrov confirmed. The Treaty, limiting the number of intercontinental ballistic missiles, submarine-launched ballistic missiles, nuclear-armed bombers, and nuclear warheads, entered into force in 2011 and covers a ten-year period with the possibility of a five-year extension.

Lavrov said that a number of countries are concerned over a potential US withdrawal from the Treaty, which “we hope, is not true”.

The foreign minister has ridiculed US media reports that President Donald Trump sought to conceal the details of his private conversation with Vladimir Putin, as well as that POTUS is working on behalf of Russia.

© Sputnik / Eduard Pesov
US Actions in Japan Create Risks For Security of Russia, China - Lavrov (VIDEO)
According to Lavrov, claims that Trump is a Kremlin agent undermine standards of journalism in the United States, and stated that there is a certain culture of diplomacy, talks and international relations that everyone should observe.

Lavrov called attacks on Trump by the media and Congress “unconstitutional” and “illegitimate”, and refused to comment on actions taken by the Trump administration.

“We know that the Congress attacks this right, it emerges often in media reports, including those by your counterparts. But this does not mean that these attacks are constitutional, neither does it makes them less illegal”, he told reporters.

Reflecting on the investigation by Special Counsel Robert Mueller into the alleged collusion between the Trump campaign and the Kremlin in 2016, Lavrov said that no evidence has been presented to corroborate those claims.

On US Warships in Arctic Region

Dwelling on last week’s announcement by US Navy Secretary Richard Spencer that Washington planned to send a warship to the Arctic, Lavrov said that Russia saw no problem in the decision as long as it is done in compliance with international law.

EXCLUSIVE: 'US Cannot Make Russia a Tool to Serve its Interests' - Lavrov