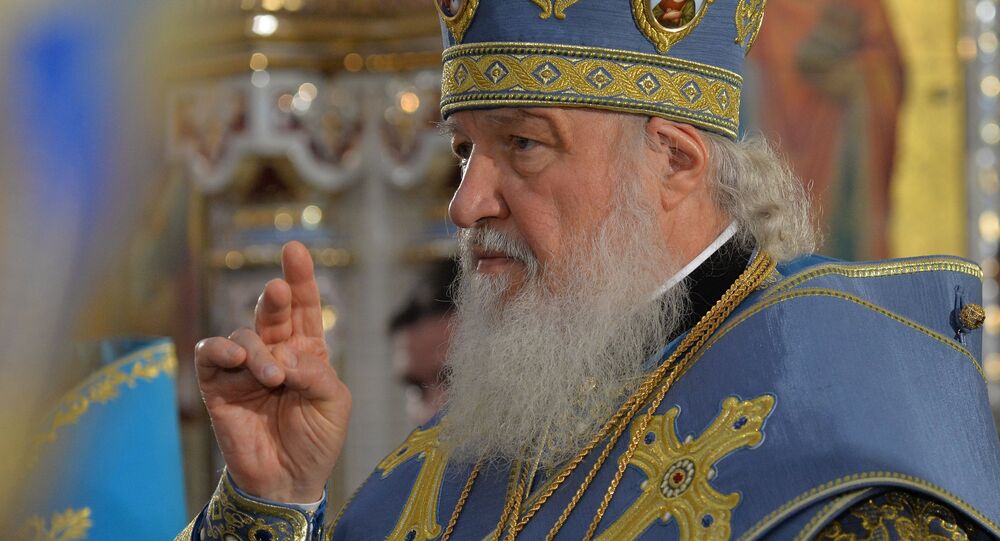 MOSCOW (Sputnik) - The absence of any reaction from the West to Ukrainian authorities’ unprecedented interference in church’s affairs indicates obvious political motives behind the creation of a new religious structure in Ukraine, Patriarch of Moscow and All Russia Kirill said.

"This story shows that everything can be trampled over and any principle can be abandoned if specific political goals are pursued. And in this sense, the political put-up job aimed at disrupting Orthodoxy in Ukraine is quite obvious", the patriarch said in the Orthodox Christmas interview to the Rossiya 1 broadcaster.

He recalled that Ukraine portrays itself as a country aspiring to become a truly European state and claims that it commits to European values.

"But one of the very important values of Europe is the principle of separation of church and religion from state … What do we see? We see the Ukrainian president chair the church council and determine who should be the head of the local church; [the president] who so blatantly interferes in church life and does not hesitate to do it publicly that it all turns into a theatre of absurdity", Patriarch Kirill added.

© Sputnik / Sergey Pyatakov
Greek Patriarch: Granting Autocephaly to Ukrainian Church Will Not Lead to Peace
He stressed that if a similar situation took place in Russia, adding that "it was hard to imagine", the country would face a barrage of criticism from Western countries and human rights activists.

According to Patriarch Kirill, neither European countries nor the United States have reacted to Kiev’s interference in church’s affairs in the situation around the newly-created church in Ukraine, even though the separation of church and state is one of the core principles that the West stands for.

The head of the Russian Orthodox Church also said that the newly-created church in Ukraine was nothing but a merger of two groups of schismatics.

"According to puppet masters and the Ukrainian president, this council was supposed to unite everyone and create a unified Orthodox church of whole Ukraine. And what happened as a result? As a result, just two schismatic groups merged together", Patriarch Kirill said.

Meanwhile, the Ukrainian Orthodox Church of the Moscow Patriarchate, led by Metropolitan Onufriy of Kiev and all Ukraine, has been and remains a "blessed, spiritual" centre of the country, Patriarch Kirill stressed.

The statement of the Russian Patriarch comes after Patriarch Bartholomew handed over an independence decree, or tomos, to the head of the new church on 6 January. Under the granted tomos, the so-called Orthodox Church of Ukraine will have jurisdiction exclusively over Ukraine and will not be authorized to appoint bishops and establish its parishes abroad, becoming effectively dependent on Constantinople.

© Sputnik / Stringer
Constantinople Patriarch Bartholomew Gives Kiev Tomos Granting Autocephaly to Newly Established Ukrainian Church - Reports
The Russian Orthodox Church has refused to recognize the results of the unification council and Constantinople's decision to grant autocephaly to the new Ukrainian church, insisting that Constantinople legalized schism and adding that the day when the tomos was signed was a "tragic" one for the global Orthodoxy.

In mid-December, a unification council was held in Kiev on the initiative of Ukrainian President Petro Poroshenko and Constantinople Patriarch Bartholomew, during which Epiphany Dumenko was elected as head of the new autocephalous church. The new church united the two previously non-canonical structures. The council was attended by only two bishops of the canonical Ukrainian Orthodox Church of the Moscow Patriarchate (UOC-MP), who were later defrocked by their church, which officially refused to participate in the event.

Greek Patriarch: Granting Autocephaly to Ukrainian Church Will Not Lead to Peace