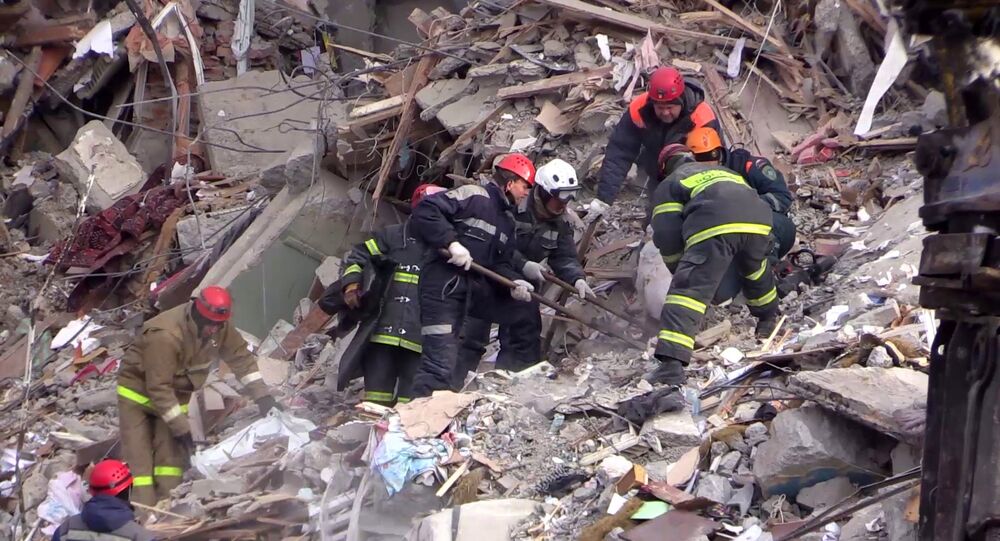 MOSCOW (Sputnik) - The death toll from the deadly collapse of a residential building in the city of Magnitogorsk, located in Russia's Ural Federal District, has grown to 37 people, a spokesperson of the Russian Emergencies Ministry told Sputnik on Thursday.

The tragedy in Magnitogorsk took place on Monday when what authorities suggested was a natural gas leak tore through a bloc of the 10-storey building, leaving dozens of apartments destroyed and damaged.

"Iranian Foreign Ministry Spokesman Bahram Qassemi has sent a message of condolence after a blast in a building in central Russia left tens of people dead and injured. In the message on Wednesday, the spokesman expressed deep regret over the incident in Magnitogorsk and extended sympathy to the government and nation of Russia as well as the families of the victims of this tragic incident," the Foreign Ministry said in a press release.

On Wednesday, Latvian Foreign Minister Edgars Rinkevics also extended his condolences to the families of the victims.

"My deep condolences to the families of victims of gas explosion in the apartment building in #Magnitogorsk #Russia, I wish speedy recovery to all the injured in this terrible tragedy," Rinkevics wrote on Twitter.

Finnish Foreign Minister Timo Soini has also expressed condolences to the families of victims and all those affected by the deadly incident in the Russian city of Magnitogorsk.

"I am very saddened by the news about the gas explosion in Magnitogorsk, in Russia, and about the growing number of victims. My deep condolences to all the families and the injured," Soini said in a statement.

"With deep sadness, I have taken the reports about the tragic consequences of a gas explosion in a residential building in Magnitogorsk … On behalf of the authorities of the Republic of Poland, I express my condolences to everyone who lost their loved ones in this catastrophe. Poles join the grief," Duda said, as quoted in the statement of his office.

Meanwhile, the search and rescue operation for dozens of other people, who have been buried under the rubble, is underway. However, the activities have been hindered by the risk of debris collapsing.