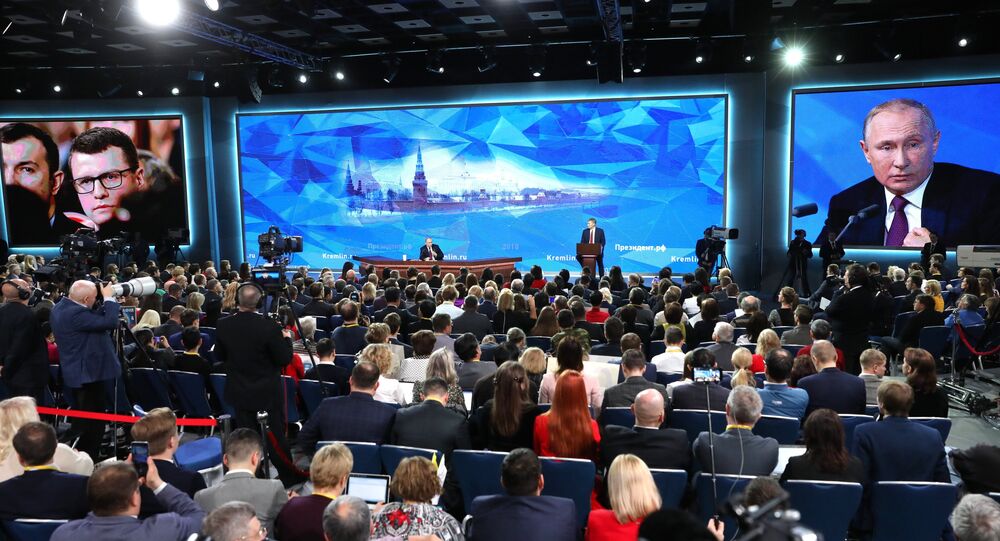 MOSCOW (Sputnik) – The Kremlin spokesman, Dmitry Peskov, on Thursday, explained the remark made by Russian President Vladimir Putin that "they should not squeal afterward" which the president said during his large new conference, speaking on the US withdrawal from the Intermediate-Range Nuclear Forces (INF) Treaty.

During the press conference, Putin said that Russia would ensure its security due to the potential withdrawal of the United States from the bilateral deal. Putin added that "they should not squeal afterward then about us obtaining some advantages," adding that Russia sought not to gain advantages but to maintain balance.

"The president meant what he has repeatedly explained. The withdrawal from the INF Treaty may potentially result in the deployment of the intermediate- and short-range ballistic missiles in European countries, just like this happened during WWII … [The deployment of these missiles in Europe] and their aiming or potential aiming at Russia would lead to Russia aiming its missile arsenal at these missile launchers in order to create parity," Peskov told Russia’s Channel One.

© AP Photo / Vandenberg Air Force Base
US Likely to Proceed With INF Pullout Even if UN Backs Treaty - Russian Envoy
Peskov added that this would result in "the development of the situation in a spiral pattern and the repetition of the situation which we, unfortunately, witnessed in the past."

Both Moscow and Washington have repeatedly accused each other of the INF Treaty violation.

In early December, US Secretary of State Mike Pompeo said the United States would suspend its adherence to the INF Treaty within 60 days unless Russia returned to full compliance of the agreement. Moscow has repeatedly said that it is not violating the INF Treaty.