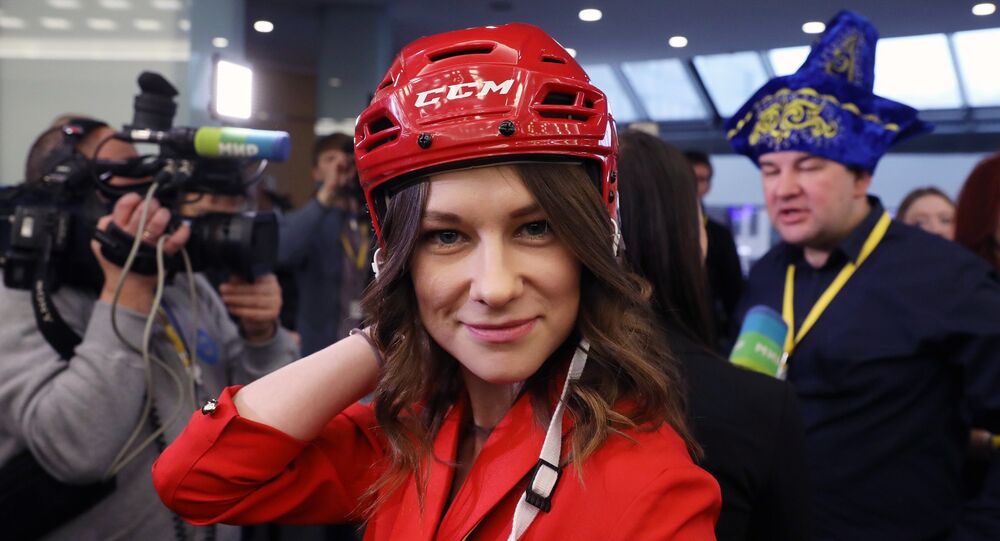 Social media are now flooded with pictures, eagerly being shared by Internet users, of this year’s press conference participants wearing the most extravagant clothes - and they seem to have good reason for that, given the whopping number of people attending the Q&A session.

Vladimir Putin is holding his traditional end-of-the-year press conference. With a record 1,700 reporters from Asia, Europe, the US and the Middle East having been formally accredited for the event, many have opted for rather peculiar ways to stand out in the crowd and attract the Russian president’s attention.

"This journalist is 'looking for happiness', expecting Putin to give him the word as she holds a banner featuring a kiss sign", one Twitterian shared, accompanying the post with a picture. The image notably shows a second poster raised by a journalist explicitly stating his decisiveness to be heard: “Won’t ask – won’t go!”

Another picture, posted by CNN Moscow journalist Mary Ilyushina, features Alexander Malkevich from the newly sanctioned media outlet USA Really donning a T-shirt with the following inscription in Russian: "I am a simple Russian journalist; it took 19 FBI agents to ‘get me’".

“Am a simple Russian journalist, it took 19 FBI agents to “get” me” Alexander Malkevich from USA really, sanctioned by US yesterday, spotted at #Putin annual press conference pic.twitter.com/LokgJL7dER

Another journalist appeared to have turned up at the annual press conference wearing a massive fur hat and a pair of boxing gloves, whereas her Volgograd colleague attempted to play upon the pervasive pre-Christmas mood and win the president’s attention by wearing a Snow Maiden costume.

Limbering up for the annual #Putin press conference… it’s all about getting attention to ask a question… pic.twitter.com/7g9AB0kOmQ

That time of year in #Russia again: #Putin ‘s annual marathon press conference is about to begin.
This journalist dressed as a snow maiden is hoping to ask about corruption in her local funeral services. pic.twitter.com/L3zKB9LifA

A pair of journalists, meanwhile, opted for a more explicit way of getting across the idea of the urgency of their questions: they put on high-visibility yellow vests, like the ones worn by protesters in France, to draw the president’s attention to the issues of the newly introduced pension reform and rise in fuel prices. "Paris is awaiting us", a banner in their hands read.

Some openly stated that the press conference is much like a show of traditional ethnic outfits, adducing pictures of the most eye-catching headgear and clothes worn today by mass media representatives, a hockey helmet, the traditional Russian head band kokoshnik, etc. One Twitterian even noted, tongue-in-cheek, in comments that the Papuans with rings in their noses are perhaps the only ones missing at the "exotic" festival.